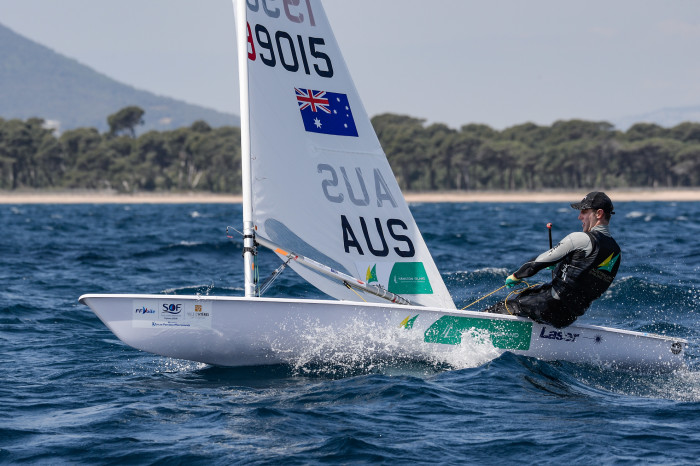 The ANZAC dominance of the Laser fleet at the Semaine Olympique Française regatta in Hyeres intensified on day three with the top six all from New Zealand and Australia.

It must look a fairly distressing scoreboard for most of the sailors from the rest of the world as the Southern Cross features prominently, and eight of the top 12 are now from Down Under.

A strong Laser fleet is competing in Hyeres, headed by the powerful British contingent and Frenchman Jean Baptiste Bernaz, who won on home waters last year, and they will be looking to mix things up with the top sailors all being grouped together in gold fleet for the final three days.

Sam Meech continues to be the best placed of the Kiwis, and sits second overall heading into gold fleet. Meech was third, second and first in his three races today and now sits two points behind Australia's Matthew Wearn, who enjoyed a perfect day of three wins in the other fleet.

George Gautrey also enjoyed a good day, with a second, fourth and third in his three races to move into sixth. Four of New Zealand's Laser sailors qualified for gold fleet, including 17-year-old Josh Armit (23rd) who recently moved up to the full rig from the youth classes, and Tom Saunders (12th).

New Zealand's top Laser squad regularly train with the best from Australia and they came into Hyeres on the back of a training camp in Auckland instead of competing in Palma and Genoa.

“We had a great training camp just before coming over here so it's nice to see it worked well for all of us,” Meech said.

Meech is in a good position heading into gold fleet but wasn't entirely satisfied with his day despite the “glamour” conditions in Hyeres with 15 knots and nice waves.

“I started like a bit of a lemon in all three races so I was playing catch-up,” he said. “Luckily I really like those conditions and had good speed and managed to work my way through the fleet.

“One of the Aussie guys in our fleet [Luke Elliott] had a really good day so I spent the day chasing him and George Gautrey around.

“It was a good day but I have plenty to work on for tomorrow. If I do the same sort of starts in gold fleet I'm going to have a bit on.”

Matthew Wearn (Australia, leader): “We spend so many days of the year training in stuff like this that you’re pretty comfortable. I’ve been itching to get racing this year in these kind of conditions and to come out of the day with a perfect scorecard – you can’t really complain. You do have to capitalise when it’s your favourable conditions, so when you’ve got different conditions later in the regatta you’ve got it up your sleeve a bit.

I basically led from start to finish in all of them, so I didn’t really see much happening in the day, but that group between two to ten was pretty close I think.”

Luke Elliott (Austrlia, third): “The first race I led from start to finish, the second one I was back a little bit – maybe fifth around the top mark – and I had to work my way through. There was a young British guy (Dan Whiteley), who was in front and I think he must have freaked out a little bit because he was first to the reach mark and then he capsized. I was like “oh no”. It was a bit unfortunate and that kind of split the fleet a bit. I managed to gybe inside him really quickly and everyone else got stuck on the other side. That put me in a really good spot on the run, so I was second at the bottom – Sam (Meech, New Zealand) was ahead of me, really good rival and friend as well, we train together a lot as well. I managed to just pip him and overtake him on the last run.

“We were neck-and-neck and 100m from the bottom I got one last wave and had the inside position, so that was quite fun, nice to take a race win off Sam (laughs), he’s pretty quick on the downwind. But he showed me who was boss on the last race. I could just see he (Sam) was really determined to win, on the reach he was flooring it. He really got away. He’d finished by the time I got to the reach mark. I was battling his countryman, George (Gautrey) for second the whole race and I managed to get him.

“It’s a good confidence build and nice to have a pretty clean scorecard so far because it’s 12 races and only one drop, so not having anything too expensive is really handy now. It gives you a little bit of room coming into gold fleet.”

Gautrey, who is a former youth sailing world championships silver medallist, is encouraged by his form so far and he's placed in the top four in four of his six races. But he's also enjoying being healthy again after suffering two bouts of tonsillitis last year and then a tonsillectomy.

“The regatta started a bit slowly but I'm building into things now,” he said. “I'm just starting to pull things together on the race course, and I'm enjoying having my health after missing large chunks of last year due to ill health.

“I'm just looking to put a whole regatta together – I seem to struggle with that sometimes – so I want to learn as much as I can as there are some big names and a lot of experience in the fleet.”

Five more races are scheduled in both the Laser and Laser Radial fleets before the top 10 medal race on Sunday morning (NZ time).

Results and standings after the third day of the Semaine Olympique Française in Hyères: