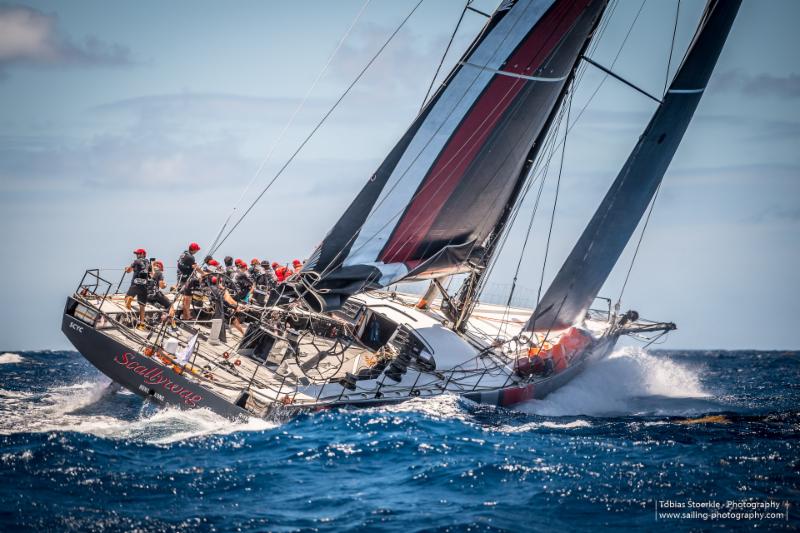 Antigua Bermuda Race Chairman, Les Crane gave the Scallywags a warm welcome, motoring out to meet the boat before their finish, and was on hand to provide the Goslings Dark 'n Stormys after the 17 Scallywag crew cleared customs.

“The boys did great, but we are a bit disappointed we didn't get the record as the weather did not play our way,” commented Witt. “We sailed the boat really well and the boat is getting more reliable, and hopefully getting a bit quicker. We are looking forward to the rest of the year, before we have a crack at the Sydney Hobart Race.

“This race was a good length for a 100 footer. It gives us a chance to really stretch our legs, as most of the other races are 600 mile sprints. This has been a great lead up to the Transatlantic Race. It has been 25 years since I have been to Bermuda and I just found out that Ian Williams won the Gold Cup yesterday, so I might catch up with him at the Royal Bermuda YC tomorrow for a Dark 'n Stormy. I seem to remember having a few when I was here last time!”

Several yachts are expected to finish the Antigua Bermuda Race over the next 24 hours. At 0900 AST on Sunday 12 May, Afansay Isaev Maxi Weddell (RUS) was 223 miles from the finish line. Gilles Barbot's Volvo 60 Esprit de Corps IV (CAN) are just 14 miles astern of Weddell, 237 miles from the finish.

In the race for the win after IRC time correction, Lombard 46 Pata Negra (GBR), skippered by Andy Liss is estimated to be leading by eight hours, with 261 miles to go. Three yachts are having a very close battle for the podium after time correction. Kevin McLaughlin's x-55 Rye (USA) is 300 miles from the finish and estimated to be second under IRC. Just one hour behind Rye on corrected time is Peter Grueterich's xP-44 Xpatriate (USA), which has 323 mile to go. Morgan Watson and Meg Reilly's Pogo 12.50 Hermes II (CAN) is fourth after IRC time correction, with 304 miles to go and very much challenging for the podium.

Track the fleet: All yachts are fitted with YB Trackers. Follow the front runners, an individual boat or the whole fleet via the website at: http://yb.tl/a2b2019