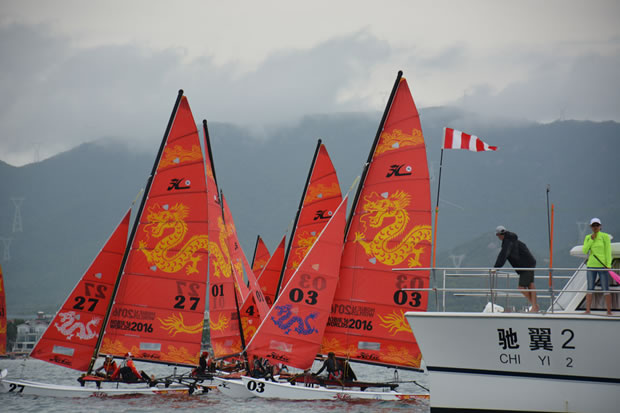 The final day of racing in the Hobie Great Grand Masters, Grand Masters, Women and Youth Classes in the 2016 Hobie® 16 World Championship regatta in Dapeng, China was completed yesterday.

Teams woke to thunder and lightning early yesterday and while the storm had passed as competitors arrived at breakfast the prevailing winds were too inconsistent throughout the day to achieve any races and the day was abandoned late in the afternoon with the scores from days one and two determining the places in the championships.
Video Interviews

Auxence Thomas and Noa Ancian from New Caledonia were proud to represent and win the Hobie 16 Youth World Championship for New Caledonia.

Noa said, “During this World Championships the wind was light but it was great for us. The conditions here have been very different from New Caledonia where we have 20kt winds, but we prefer these lighter conditions and that is why we did so well. We are very proud to represent New Caledonia and to win the world championship for our country, that is really great”.

Krystal Weir and Georgia Warren-Myers from Australia won the Hobie 16 Women’s World Championship and were thrilled to have achieved their goal.

“ The Hobie 16 Worlds has been awesome. We’ve been lucky to have a small but really competitive fleet to race against. I’ve had my champ crew with me, Georgia. On day one communication was a bit tricky for us because we haven’t sailed together much. On day two we changed things a lot and we were able to get it together.“

Georgia said, “ Things started changing in the third race of the first day. We kind of had a bit more discussion and the breeze got up a little bit and we just hit our element, because the only times that we really had sailed together had been in a fair bit of breeze.

When it came up we just went “Ah! yep, we know what we’re doing here” and we just went absolutely nuts. Day two we knew what each other wanted, it all clicked into gear and we had a great time. The 40kts that came up yesterday was awesome fun, we just had the best time in it.

It’s just amazing to be the world champions, that was the goal coming over here, it’s just such a relief really, just a joy.”

Rod and Kerry Waterhouse from Australia won the Hobie Grand Masters International Cup after a previous victory in the Masters Class only a few days ago. Rod shared his thoughts on the event.

“The race was called off for the day which leaves us leading which is fantastic and I’m really pleased to get this one. Once again it was a super tough series and it went down to the wire with three contenders going into the last race. So we are really happy to win the Grand Masters and now we have three days off. Hopefully, we’ll have some wind for the next few days for the Open Qualifiers.”

When asked if he and his crew Kerry were going for the trifecta (winning the Masters, Grand Masters and Open titles), Rod replied.

“We would definitely love that to happen but I know that is going to be a tough ask. We’re just going to be happy to be out there amongst some serious competition and with 50 to 60 boats on the start line it’s a whole new ballgame, so we’re looking forward to it.”

“It’s been absolutely great sailing we’ve had a bit of everything we had some really light air and some screaming runs in amongst some really fierce competition. We are really lucky to have managed to get over Tards (Bruce Tardrew) regardless of what event is on, it seems it’s always between Tards and myself, he’s a great competitor. We’re glad we were able to sail in this event, there were some very good sailors in that group, the venue is fantastic and the boats are beautiful with the best sail design I’ve seen in probably any event, so yeah we’re very, very happy.”

The Presentation Dinner for the series was held last night in the ballroom of the Manwan Harmona Resort. Congratulations to all of the winners and the second and third place getters. Thank you to all who participated in the regatta and battled it out on the water.