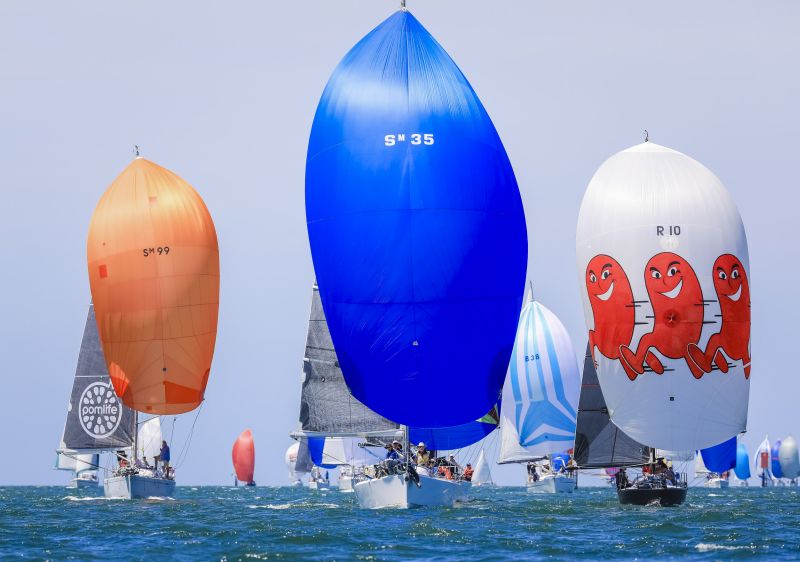 Three days of fine-weather sailing and equally busy evenings came to a close on the Monday of the Australia Day long weekend and sailors from eight to eighty are heading home for a rest following another successful staging of the Festival of Sails at Geelong.

Light ENE breezes filled out to 20 knots from the sou’east later in the day for the combined fleet of close to 300 boats hailing from various clubs along Port Phillip’s vast shoreline plus interstate and as far away as the USA and Malaysia.

Full results in all divisions.

Regatta director Denis Thompson agreed the weather was kind, with breeze all weekend and Corio Bay’s unique flat water. “Saturday and Sunday the fleet enjoyed Geelong’s famous summer seabreeze and Monday was the perfect way to finish. We had very tight racing and not too many on-water incidents or protests.”

Following on from Australian Sailing’s Australian Yachting Championship across the bay, four TP52s thrashed it out over six passage and windward/leeward races in the Hardys Rating Series division 1.

Geoff Boettcher’s Secret Mens Business from Adelaide seized on a big shift in the final medium distance race and overtook the two duelling Sydney boats, Ichi Ban and Hooligan, to lead the drag race through the Hopetoun Channel and seal the series by a point. Geoff Boettcher interview.

Alan Moffat’s Mack One was never threatened in the Gill VX One Australian Championship, the in-form defending Queenslanders giving the rest of the 26-boat fleet a drubbing at the class’ premier event.

Nineteen points between first and second is a one design whitewash and Moffat had this to say: “We’ve gone back to back and we are rapt. We had a good win last year at Lake Macquarie but this is the one I wanted, sailing with a hot fleet of VX Ones.” Full interview with the Mack One crew.

Second was Andy Patrick’s Cowabunga (QLD) and the third VX One was the Rob Douglass skippered Rabbel (NSW).

Winning J111, Rod Warren’s Joust from Sandringham Yacht Club used the class championship as training for the upcoming worlds in Chicago. Tactician Aaron Linton said, “It worked out that we didn’t have to sail today but we are using it as good training.”

Sail Racer S80 top results went to Stephen Barker’s Rock N Roll in the second largest one-design fleet behind the VX Ones at the Festival of Sails. Barker and crew interview.

Chris Manton’s local entry Perfect Balance was the winning Etchells, Gordon Beath’s Chamberlain 14 Roamance took out the Schweppes Multihull Series and Andrew York added to his tally of major titles in the Air Asia Corio Bay Series with this own design, Reo Speedwagon.

One of three major Victorian long weekend sporting events, along with the Australian Open finals and Cadel Evans Great Ocean Road Race, the Royal Geelong Yacht Club organised Festival of Sails was the last to entertain competitors and holidaymakers, either local or visiting the state.