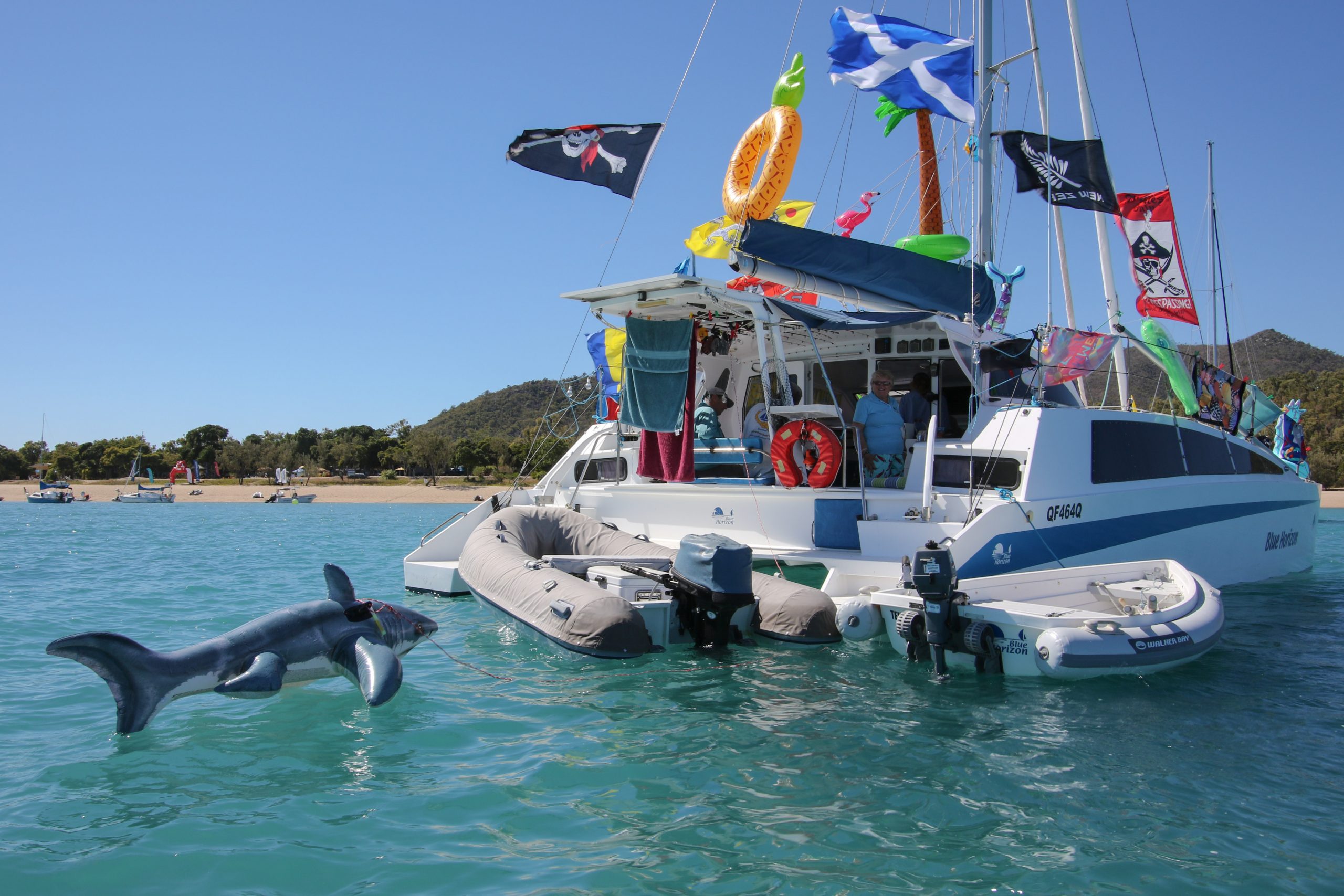 When Ken and Rhonda Thackeray started the Shag Islet Cruising Yacht Club in 2009, they could never have predicted what lay ahead. In just over a decade, the story of the world’s most exclusively non-exclusive yacht club has become firmly entrenched in cruising folklore.

A number of these ‘Shaggers’ as they prefer to be known, congregate in their spiritual home at the top of the Whitsundays during the last weekend of August each year. The annual SICYC Rendezvous is the ultimate party with a purpose, doubling as a major fundraiser for the Prostate Cancer Foundation of Australia.

Impressive as these figures are, the SICYC family remains ever humble and true to its original intent. The club is first and foremost a network for cruising yachties and people who love boating.

The SICYC Season of Sail

Nowhere is cruising camaraderie more evident than through the SICYC Season of Sail. A relatively new initiative, the 2019 season saw cruisers travelling in company from as far south as Tasmania to eventually arrive in the Gloucester Passage on Thursday, August 22.

Leading the five-month journey were Justin and Judy Arundell in their catamaran Hurtle Turtle. “We connected with Shaggers groups all the way up the coast and even though we fragmented and re-joined we always maintained online connectivity and that’s still going today,” Justin said.

Helping first-time cruisers was one of the functions Justin and Judy were able to perform. “We’ve all been able to lean on each other,” Judy said.

“The first timers could ask those of us who’d done it before what to expect ahead and that was a big plus.”

In Lake Macquarie however, it was Justin and Judy who needed help. En route, they had learned of a death in the family and were suddenly faced with an unexpected period of absence from their boat.

Happily, SICYC members from Lake Macquarie were standing by to assist. “Within hours of arriving we had four offers to drive us an hour to the airport and back,” Justin said.

“The Lake Macquarie Shaggers arranged a mooring for us and looked after our boat while we were in Melbourne – and this is really what Ken’s set up – Shaggers helping Shaggers and cruisers helping cruisers.”

Cruisers helping one another wasn’t the only benefit of the Season of Sail. There were dinners ashore, sailing events, and fundraising for the PCFA along the way.

In the Clarence River, this culminated in a week of high activity, during which about $10,000 was raised. Organised by Clarence River Shaggers Glad and Rick, the festivities included a Welcome to Country, address by the local mayor, breakfasts, barbeques, auctions, and socialising.

“Not only did we raise $10,000 for the Prostate Cancer Foundation but our 25 boats pumped $20,000 into the local economy over those seven days,” Justin said. “If we can keep growing the SICYC Season of Sail, it’ll have huge outcomes for economic development and local businesses in areas up and down the east Australia coast.”

By the time Justin, Judy and the other Season of Sail participants arrived at the Gloucester Passage they could have been forgiven for thinking they’d landed on another continent. Crews on board the assembled fleet of 125 boats were rapidly swapping lifejackets and wet weather gear for pirate outfits, feathers and flamboyant costumes befitting the 2019 Rendezvous theme.

Titled ‘Rio Carnivale’, the Saturday evening festivities were among the most memorable of the event’s 11 years for its founders Ken and Rhonda.

“This year’s theme was absolutely fabulous,” Rhonda said. “It will definitely go down as one of the better ones – the costumes were just wonderful.”

Stewart Scarborough took out the accolade of best dressed male with his incredible home-made headpiece, and Heather James won the award for best dressed female with her own ‘Carnivale’ inspired accessories.

Whitsunday locals joined the festivities on buses from Airlie Beach, and the contingent partied long into the night on the lawns of the Cape Gloucester Resort.

As usual, the Rendezvous also incorporated serious fundraising for the PCFA and importantly the raising of awareness about prostate cancer.

Speaking at a special breakfast event for a second year was Dr Michael Gillman, a prostate cancer specialist of some 30 years and medical board member of the PCFA. Dr Gillman said the demographics of SICYC members were perfect for raising awareness that prostate cancer exists and can be tested for.

“However, the test we have at the moment is not the be-all-and-end-all and we need a better test,” he said. “Only through fundraising and funding the research will we ever get to that point.”

Adding to Dr Gillman’s comments was chairwoman of the PCFA Queensland board, Distinguished Professor Judith Clements. “There are over 200,000 men living with prostate cancer in Australia, more than 3,500 who die each year from prostate cancer and over 20,000 who are newly diagnosed each year,” she said.

“More men die of prostate cancer than women do of breast cancer – perhaps a little-known fact – so the work the SICYC does is very much acknowledged.”

Distinguished Professor Clements said over the years the money raised by SICYC had gone towards important clinical trials for new drugs and treatments as well as funding prostate cancer support nurses around Australia.

Joining hands across the blue

One of the awareness initiatives the SICYC has become renowned for is its ‘Hands Across the Blue’ event. In this symbolic gesture ‘Shaggers’ form the shape of the PCFA logo in their tenders.

For the second consecutive year, the weather on the Saturday morning wasn’t conducive to holding the formation. Instead, everyone gathered at the stern of Coral Sea Marina owner Paul Darrouzet’s motor yacht, the MV Norseman.

Paul has been a personal supporter of the SICYC for the past six years. “A friend of mine is suffering from prostate cancer and he’s doing it pretty tough at the moment, so we need to support him and all the other people who are suffering,” he told the floating crowd – before inviting all and sundry for hosted drinks and canapes aboard his boat.

Ken Thackeray said partners like Paul and Gold Coast City Marina representatives Trent Gay and Luke McCaul, who both travelled north to be at the event, were the backbone of the SICYC.  “I encourage you to support the people who support us,” he said.

“Look through the sponsor list on the back of your programs and make sure you use the services of the people who are backing us.”

More than a cheque

One of the partners who raised the stakes on their contribution for 2019 was Fish D’Vine owner Kevin Collins. Having trialled the outdoor dinner event ‘Blanc Sur Blanc’ at the 2018 Rendezvous, Kevin and his team expanded on it for 2019.

While last year’s dinner fed 50 people, this year’s table was set for just over 100.

“This was our chance to not just make a sizeable donation of $5,000 to Shaggers but to showcase what we do,” Kevin said.

“Prostate cancer and the SICYC is a great cause to contribute to and at the end of the day this event is the heart and soul of Airlie Beach and the Whitsundays. “We’re fun town and the Rendezvous has just about replaced the Fun Race as one of our signature weekends.

“When you get these kinds of events, you’ve got to be involved and participate. ‘Plus, Ken and Rhonda are volunteers – they’re tireless and they do so much; they’re well and truly worthy of our support.”

They say that behind every good man there’s an even better woman, and while Ken might be the front man of the SICYC, Rhonda is an equal driving force. “She’s really the Commodore,” Ken said.

The “Ma and Pa” of the SICYC, Ken and Rhonda announced they were taking a step back in 2018, with this year’s Rendezvous the first to be led by a new committee. “After 10 years we needed to let people come up with new ideas,” Rhonda explained.

“We’re not on the committee but Ken is a mentor and over the four days I’m on the go all the time at the actual event. The raising of the money and awareness is important and the sharing of boating is even more important.

“There’s a lot of things that can be done – it certainly won’t finish and at the end of the day it’s a wonderful club.”