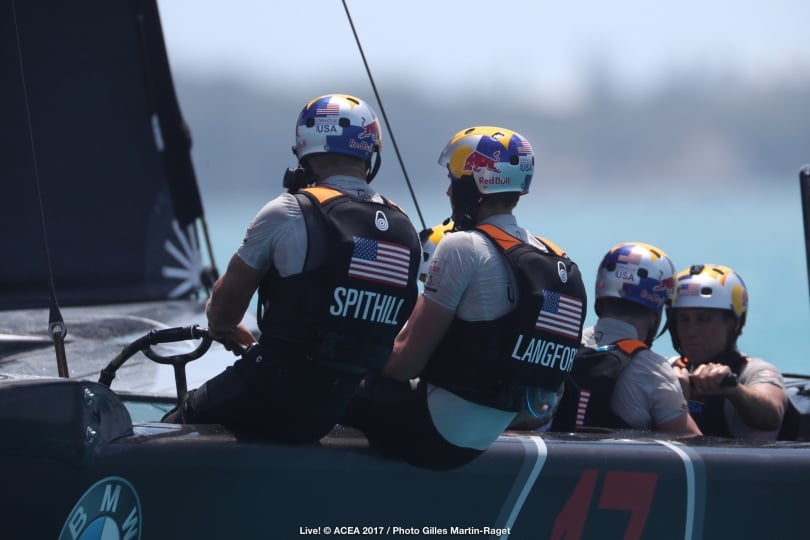 It was another glorious day in Bermuda for three America's Cup qualifying matches but with the wind at 12 knots and easing, the decision on which set of foils to fit would have the crews agonising. Artemis had the toughest decision as they had to race twice – once against New Zealand while the wind was up, and then later in the day against Ben Ainslie Racing when it was expected to ease to around 9 knots.

Once the boards are in, they can't be changed, so Artemis had to compromise and go into the first race with more drag than was ideal.

Yesterday Nathan Outteridge and his Artemis Racing team were penalised for a port/starboard incident towards the finish of their race with the Kiwis. Subsequently the umpires admitted they got the call wrong, but on-water decisions can't be overturned.

It was an exciting race, with nine lead changes, and Artemis was clearly the better boat.

Today there was another port/starboard call, this time a correct one, and it again cost Artemis a vital point.

At the start, Outteridge went hunting his long-time 49er rival Peter Burling but at the last minute he pulled away and went for a high speed start, which worked perfectly. Speeding away on the reach, the Swedish boat was 3 seconds in front.

The Kiwis closed the gap and a good first gybe saw them briefly in front but as they gybed again, close to Artemis, a gust of bad air from the Swedish wing seemed to upset the rhythm on ETN. The weather rudder cavitated, the boat bucked like a bronco and the bows dived nose-first into the water.

That one bad manoeuvre cost them 20 seconds or 200m at the bottom mark.

Obviously paying for the bigger foils, Artemis lacked the Kiwis speed upwind and Burling closed the gap to 5 seconds but one extra gybe on the second run blew it out to 11 seconds at the bottom mark.

The drama came on the final beat. As both boats approached the mark, the Kiwis had closed considerably. As they raced in from opposite sides, Outteridge misjudged the cross, forcing the Kiwis, who were on starboard, to noticeably change their line to duck the Swedish stern.

Quite rightly this time, the umpires called a two lengths penalty on Artemis and once again they had to pull back and let ETNZ cross the line first.

The lesson from the first three days when racing the French is not to get in a dog fight. Jimmy Spithill had obviously been watching the races closely and knew that if you get a lead, France doesn't have the speed or manoeuvres to come back.

The American boat went for the classic hook, got underneath the French and pushed them away from the line. With 25 seconds to go, Spithill eased off the wind and left the French wallowing in his wake.

It was going to be a procession all the way to the finish and that was just as well for the Oracle crew. On the final leg they noticed an issue with the wing.

“We'll have to nurse it in from here,” was the call from tactician Tom Slingsby, and that's just what the team did, easing into a 1:56 win.
“We had an issue, a bit of a failure in the wing,” Spithill said after the finish. “But that can happen. Kyle (Langford – wing trimmer) did a good job… put a bit of a band-aid on it and we were able to get through the race. But from that point on we were kind of in delivery mode.”
SWE v BAR

Despite being one of the favoured teams after the practice racing, Artemis were sitting on two points with France and Japan at the bottom of the ladder and desperately needed a win to bolster their confidence and get them out of the danger zone – one of the five challengers goes home after the qualifying series.

However, there was also desperation in the British camp, with Ainslie looking at four losses and just a single win over France to his credit. Only the two points he carried into the qualifiers courtesy of the Word Series was keeping him off the bottom of the leaderboard.

So both teams had everything to sail for as they set up in the starting box. Ainslie went for the hook and Outteridge closed him out. But Ainslie obviously had a Plan B and quickly took off to the top end of the line, crossing at much higher speed and racing away.

Straight line speed has been a problem for the British until now but they have made some adjustments that have worked. The slingshot from the start got them away from the dog fight zone and allowed them to work the big shifts that were blowing down the course.

Outteridge was forced out of phase as he had no option but to split at the bottom gate and Ainslie was far enough ahead that he didn't need to cover. He worked the shifts beautifully and raced away to a comfortable win.

The forecast for tomorrow is for light winds, with the possibility of no racing if they drop below the 6 knot limit.

If the event does take place, Artemis has a rest day while France races twice. The draw is