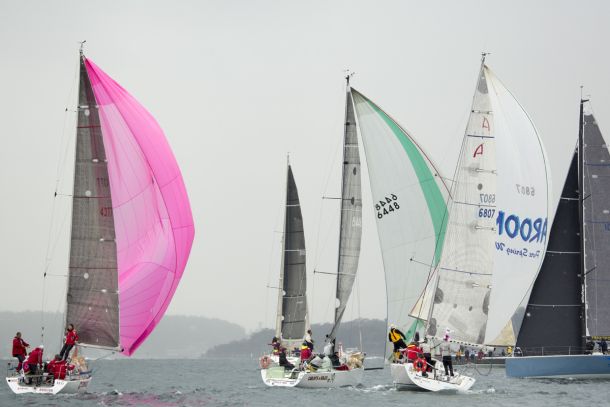 An icy cold, wet and miserable day nevertheless attracted the diehards to Race Eight of the Cruising Yacht Club of Australia’s Land Rover Winter Series, because there is everything to play for with just two weeks of the pointscore remaining.

Today’s race was an echo of last week’s. Slow and steady won the race, with light and next to nothing breezes saturating the Sydney Harbour course area again.

Principal Race Officer, Steve Kidson, commented back at the CYCA this afternoon: “It became a day of doubt. It was 7 to 8 knots from the west-north-west as the first boats got away. From there it was stop, start, stop, start, and so it went.

“The first boat got through the gate the first time at around 12.50pm and we were getting pretty much a westerly of 7 knots, so I decided not to shorten the course. You were damned if you did and damned if you didn’t,” Kidson said, agreeing that in this type of weather you would please some, but not others, for taking the fleet around the course a second time.

Division D winner, Ian Guanaria (One More-No More) commented: “I did wonder why they took us around a second time, but I guess it’s hard to know what to do, as the wind was fairly consistent, around 7 knots, but it died out at times.”

Guanaria and his Beneteau First 35 crew were particularly happy with themselves after winning. “That’s the first Winter Series race we’ve won in years. The crew work was good, the tactics were good – we picked it right – and in the end, the conditions suited us down to the ground.

“It was very, very, cold when we went out though. That’s the first time I’ve worn my Musto Snug AND my wet weather jacket, but we managed to avoid most of the rain and we’re very pleased with our result.”

One More-No More’s victory has lifted her into second place overall in division. She is one point shy of the leader, Sommerbreeze, the Cavalier 350sl owned by past CYCA commodore Hans Sommer, which finished third today.

“It took us a while to catch James – we got them early on the second lap. It’s been an interesting battle between us in this series, and with two races to go it will go right to the wire,” Green conceded late this afternoon.

“It (James) is a little smaller than us (Crusader is 9.7 metres to James’ 7 metres), but it’s certainly been exciting between us and we’re enjoying it.”

Kidson said the last boat to finish today was Ian Arthy’s Beneteau Oceanis 311, Jublilee. The Division G entry finished at just after 4.10pm for last in the division – a far cry from his win in Race 3.

In other news, Darryl Hodgkinson’s Victoire has a narrow three-point lead from Duende in Division A1 with just two races remaining. Division A1 has two boats on equal points, with today’s winner, Playstation 4 now on 19 points alongside Matt Wilkinson/Andrew Wylie/Dion Morrison’s Kerisma.

Each week, one lucky division winner is drawn to receive a Land Rover Range Rover Evoque drive experience for a week. The well-deserved winner was Steve Wyatt’s Bavaria 35 Match, Double Trouble, which today snapped up its fourth win of the series.

A second draw is held for a lift stand launch and two free laydays courtesy of the Noakes Group and that prize went to Karen Hawkett’s Beneteau 305, Broulee.

The Winter Series continues next Sunday with Race Nine starting from 11.30am.