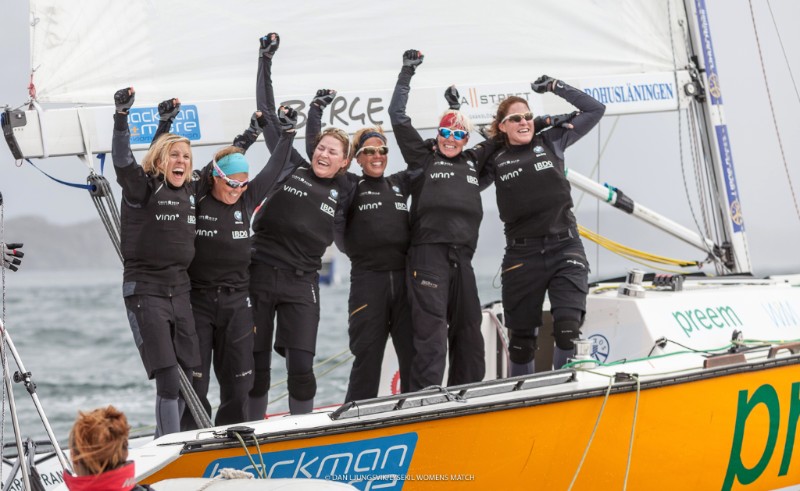 After five years of Danish triumph in Lysekil Women’s Match, local hope Anna Östling finally sailed to a very longed-for success. With the smallest of margins she pushed herself past Stephanie Roble, USA, right before finishing the very last finale match:

“Awesome! Wonderful to see the flag signalling our victory. We’ve been waiting for so long for this” the Swedish skipper called out immediately after finishing.

Anna Östling and her crew kicked off their Saturday in Lysekil by quite easily defeating reigning World Champion Lotte Meldgaard 3 – 0 in their semi final. World #1 Camilla Ulrikkeholm Klinkby started with two straight victories over Stephanie Roble in the other semi final, but was then penalised in the third prestart, and had a really hard time getting back after that:

“We kind of stepped down one level, and didn’t manage to fight back. They sailed a little bit better and just nailed it” sighs Ulrikkeholm Klinkby, who was forced to let three straight matches and the semi final victory go to the Americans.

“I’m very proud of my team. They just showed how much they wanted to race in the final” Roble comments.

While Ulrikkeholm Klinkby and Roble used much of their power and energy out on the water, Östling and her crew – Malin Källström, Marie Berg, Annie & Linnea Wennergren and Annika Carlunger – were able to recover and recharge ashore before the finale:

“But you mustn’t get too relaxed during a long break like that. At the same time you miss the chance to keep updated and in phase with what’s going on out on the water” Östling notes, getting support from Roble in that.

“In our opinion we got some extra practise before the finale” the American skipper says.

The Swedish girls obviously still managed the long break in the right way, defeating Roble in the first match of the finals. But the Americans broke back in the second match, leading the final and deciding match all the way from the start and almost until the finish. With a little help from a generous puff, and with a nothing but perfectly executed gybe, the Swedes could pass just a few boat lengths from the finishing line. In a millimetre drama accompanied by loud cheering from their home supporters on the cliffs, Östling & Co beat Roble, to secure their first and very longed-for triumph in Lysekil Women’s Match:

“I told my crew to do the most perfect gybe in the regatta, and so they did. It just felt magical” Östling laughs.

“We just felt that we couldn’t go from five straight victories to a 4th place, so we fought very hard to at least reach the podium” smiles Ulrikkeholm Klinkby, now keeping her runner-up position in WIM Series on 38 points.

“Today we lacked speed and boat handling, and made a few tactical mistakes. That’s just not enough when our competition is not making many, if any, mistakes” Meldgaard states.

After this season’s first WIM Series victory in Helsinki, Finland, a month ago, and the latest triumph in Lysekil, Anna Östling and her crew are now at the top of the Series’ scoreboard on maximum 50 points. The next event on the 2016 WIM Series is the Women’s Match Racing World Championship & Buddy Melges Challenge in Sheboygan, USA, September 20 – 25:

“Tonight we’ll party, but then we reload for a new victory in the USA” concludes Östling, who took the World Championship title in 2014.