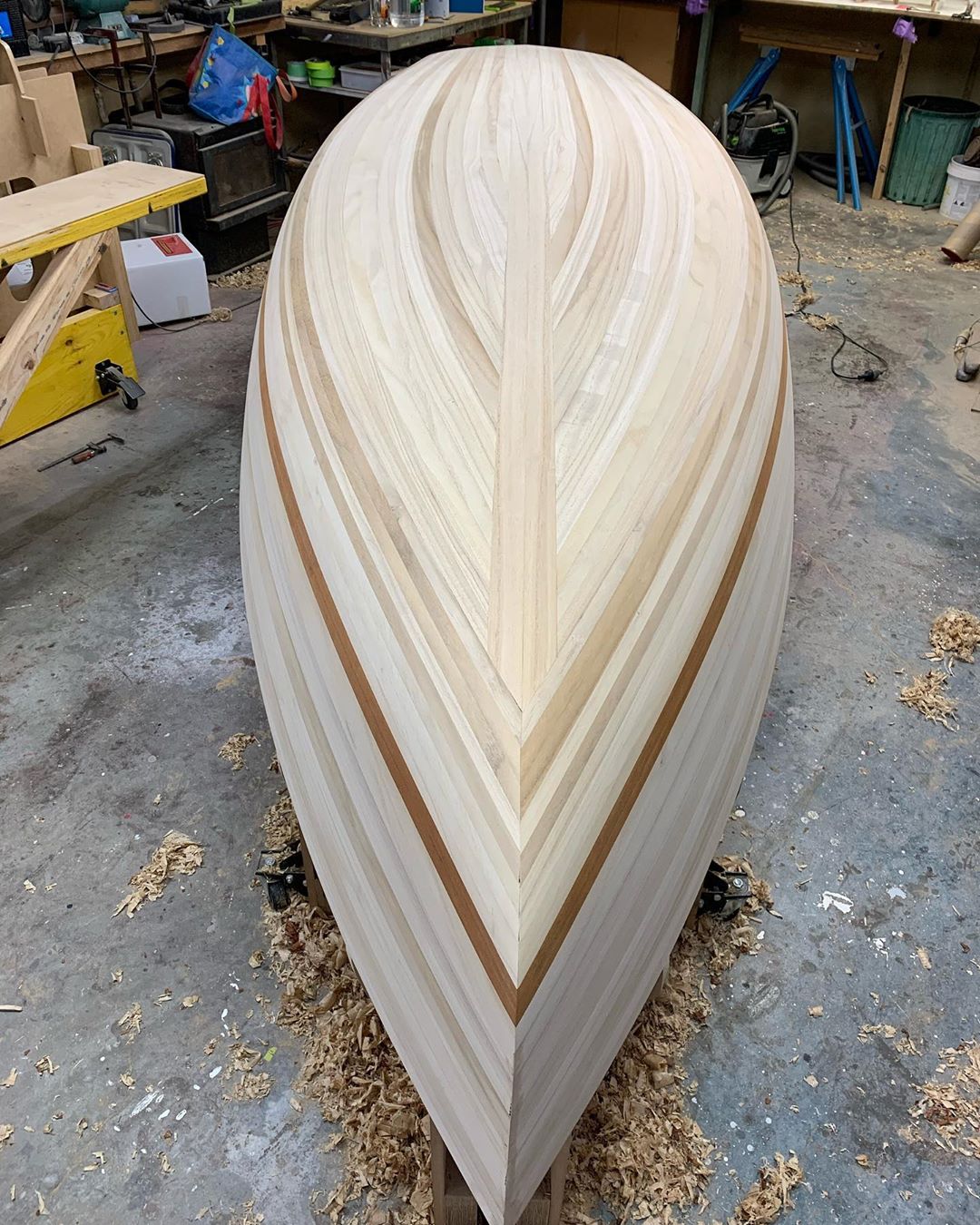 As Col explains: “We're vacuuming down the rudder and centreboard blades, in two halves, then we'll fibreglass them up and glue them together. We are mocking up the foredeck next. All things going smoothly, we'll probably be on track for sea trials in a few weeks.”

Col Bailey is a specialist in timber boats and has worked with Andy Dovell on many boats over the years. Col developed a special technique to hold the planks on the jig without the need for fastenings.

“On this dinghy, every plank is individually shaped and tapered, then glued and clamped into position – there's no fastening in the build process.”

Built using Paulownia, known as “the other balsa” and used in applications where a lightweight and proportionately strong wood is needed, the “super dinghy” is destined to be the pride and joy of mad skiff sailor Jay Harrison, designed as “something he can zip around in” when his main vessel is at anchor.

“Boats of this size are traditionally made of Western red cedar, but Paulownia is lighter and has more character,” said designer, Andy Dovell. “Paulownia gives a vessel a striped effect, but it needs some offsetting features to break it up. Col has used some Australian red cedar to highlight the waterline and transom and add some visual contrast.”

According to Andy, the client brief stated that the vessel “needed to be used as a tender to a 47-foot yacht, so it had to fit on the transom”.

“It could be no longer than 12ft, but designers always go to the maximum. Secondly, it needed to operate as a sailboat so wherever he goes in the Pacific, like the lagoon in Bora Bora, he can drop it in and sail.

“Thirdly, it had to be easy to row so Jay's wife can take it for a little outing to shore, and a form of exercise. A sliding seat will be installed on the centreboard truck for that purpose.”

A native of New York, Andy drew on his experience as a youth racing Thistle boats.

“It's a timber built boat that blends old and new, with several features of the Thistle boats I raced as a kid. There were fleets up and down the East Coast of the US and and The Great Lakes. I wanted to combine the aesthetics of classic dinghies of the 19th century, with the practical and functional attributes of modern materials, such as the carbon fibre deck, which is self-draining and easy to handle.

“If you dump it, you can crawl right back in and get going again, which is an important safety feature.”

Andy Dovell and Col Bailey worked closely with ATL Composites from the start.

“The finish will be superb, so it’s something everybody, whether they are woodies or not, will be interested in,” said Lorraine Murray, Director at ATL Composites.

The outside of the impeccably-hewn dingy is sprayed clear, as is the carbon-fibre foredeck.

“We worked with ATL on the clarity of finish, so you can see the timber and the craftsmanship very clearly,” explained Andy. “The cockpit sole will be painted Oyster White, because carbon can get hot in the sun, and it's non-skid for safety.”

WEST SYSTEM 105 Epoxy Resin combined with the 207 Special Clear hardener has produced an ultra-clear finish and a UV inhibitor in the formulation will provide a beautiful, long lasting finish – the super dinghy project is a showcase example.

Col has worked closely with ATL over the years and says he is very satisfied with the WEST SYSTEM range of products.

“I really trust WEST SYSTEM products. In 25 years, I have never had a failure. The beauty of this boat is that we are working to a plan from Andy and it's very intricate work, which is beautiful,” said Col.

“There's not much new build work these days, it's mostly repairs. This dinghy is small and neat, so attention to detail has to be fine. With bigger boats, the eye tends to be drawn away.”