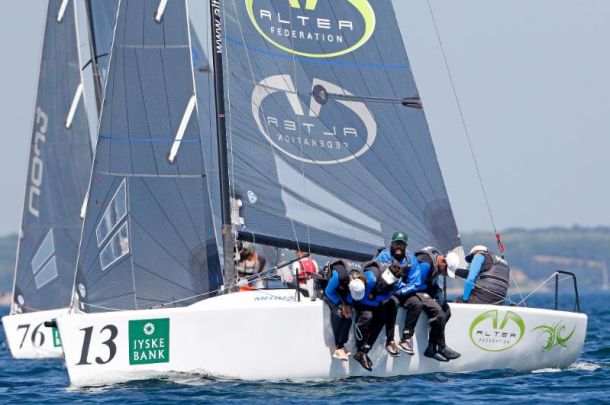 “We are really happy about this great start and we will try to do our best to defend our leadership but it will be not easy: the fleet is really huge and wind is light and shifty. It seems that tomorrow will be a windy day and we are ready to surf the waves – finally,” said Andrea Racchelli a few minutes after the end of race number six.

Also the fight for the Corinthian Trophy starts to be interesting, with German Kicker Schäfer's Musto Racing GER803 (17-24-11) that is now in front of Austrian Four And A Half Men AUT681 (8-30-3) with Franz Urlesberger in helm and Estonian Tõnu Tõniste's Lenny EST790 (1-18-20). The Corinthian boats are respectively on the sixth, ninth and twelfth positions in the overall ranking.

Races valid for the Melges 24 World Championship 2015 will resume tomorrow, at 11 am. Weather forecast predict the windiest day of the week: so, be ready for three more races.

We remind you that the series will count on 14 races and that after the end of race number 13 the standings will include two discards.

The link to the daily LiveStream can be found here http://www.sportsxstream.com/MultiLevelEvent/Melges-24-World-Championship-2015.html