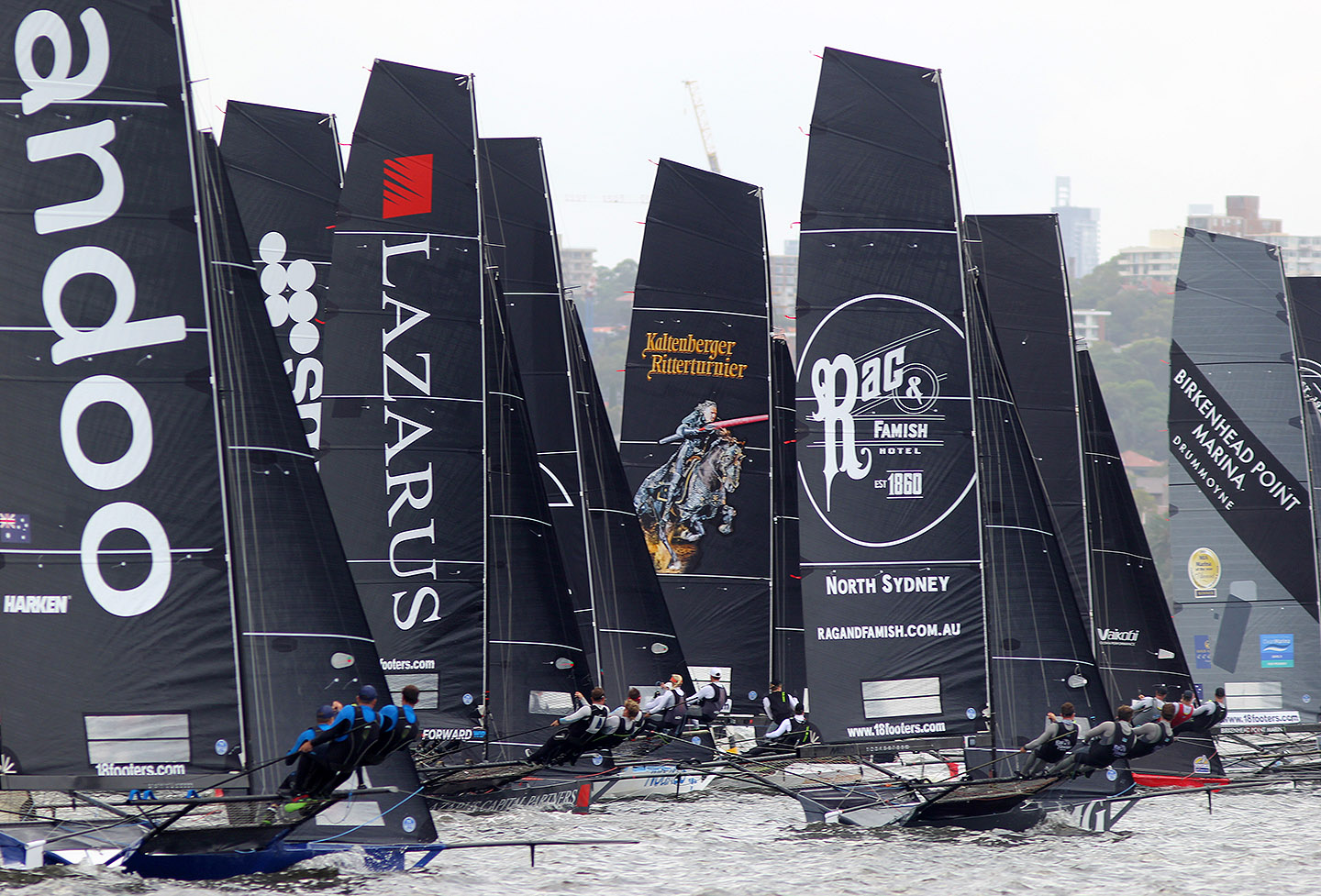 Off the start in Race 1 - Frank Quealey pic

The Andoo team of Seve Jarvin, Matt Stenta and Sam Newton have stamped themselves as a clear favourite for the 2022 JJ Giltinan 18ft Skiff Championship after a brilliant victory in Race One of the Championship on Sydney Harbour today.

Andoo trailed the early leader Balmain Slake (Henry Larkings) for the first lap of the north-east course before gaining the upper hand on the second beat to the Beashel Buoy, before powering away to score a 2m17s victory over Tech2 (Jack Macartney, Charlie Wyatt and Lewis Brake).

Today’s race started in a light north-east wind, with a run-out tide, giving each team an opportunity to take a variety of preferred courses and the 25-boat fleet was spread across the Harbour as it made its way to the Beashel Buoy.

The rookie Balmain Slake team retained the lead on the spinnaker run into the wing mark off the southern end of Shark Island and continued to hold the fleet off between Shark and Clark islands.

Andoo was the big improver on the run from the Beashel Buoy. The team was only in ninth place, behind Finport Finance, Smeg, Yandoo (John Winning) and Tech2, as spinnakers were set. She was vying for the lead by the time the fleet reached the wing mark.

At the end of the first lap, Birkenhead Point Marina was in third place ahead of Smeg, Tech2, Rag & Famish Hotel, Burrawang-Young Henrys and Black Swan (Luke Parkinson).

Once Andoo grabbed the lead, the team began to dominate the race and extended the lead to 55s on the following beat to the top mark at the Beashel Buoy. Tech2 had moved into second place with Balmain Slake holding on narrowly ahead of Smeg and Birkenhead Point Marina.

Andoo extended the lead to 1m15s on the downwind leg back to the bottom mark off Clark Island, then increased the margin to 1m45s at the top mark on the final lap of the course.

Andoo’s skipper Seve Jarvin has already won seven JJ Giltinan Championships as a skipper and one as part of the 2005 champion Club Marine team, and after today’s performance has every chance to extend the record.

While Andoo’s performance was impressive, there were many teams in the fleet which performed strongly., including the three teams which finished behind the very experienced top three placegetters.

The Birkenhead Point Marina team of Tim Westwood, Will Dargaville and Alex Chittenden gave their best performance since coming together this season and won the handicap section of the race.

Today’s result sheet, and photos from the racing, are attached

Spectators can follow the racing on board the spectator ferry. Booking online is essential through the Club’s website: http://www.18footers.com.au/18-footers-sailing/spectator-ferry/

For those unable to make it out onto the water, Sail Media’s live-as-it-happens broadcast team will be on Sydney Harbour to capture all the action via live streaming: www.18footers.com and click on the ’18 Footers TV’ link.