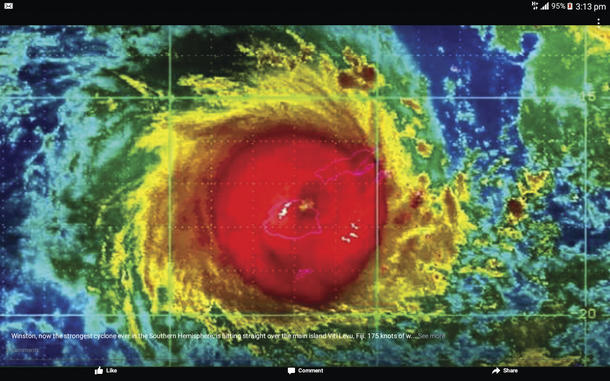 After a three year cruise from the east coast of USA, Ian and I arrived on Outsider in Fiji in April 2015, our original plan was New Year’s Eve on Sydney Harbour. But after a month or so in Fiji we decided to stay for the year and explore the islands and enjoy the wonderful Fijian people.

Having spent many years on the North Queensland coast we were aware that we needed to be close to a good cyclone hole. Fiji has many mangrove rivers and creeks and, after visiting all of Fiji’s marinas and cyclone mooring fields, we knew from experience with cyclones Guba, Ului, Yassi and hurricane Sandy that these havens were not for us.

We surveyed numerous places, particularly on the north coast of Vanua Levu and found some secure spots. We also surveyed the mangrove creek near Port Denarau Marina, which is a traditionally used cyclone hole and found it to be the best spot around this locality.

In December 2015 the first tropical depression of the season to effect Fiji passed to the north. We were at the time on the north coast of Vanua Levu, four miles up a river in the exciting and vibrant town of Labasa. Here one can anchor a stone’s throw from the local fruit, vegetable and fish market and enjoy the hustle and bustle of this busy provincial centre.

As we had friends arriving in Nadi on Australia Day we made our way down to the Denarau area. We had planned to spend a couple weeks in the Mananuca and Yasawa groups. As it turned out the weather was absolutely perfect, clear blue skies, hot days and balmy nights.

Our friends had a wonderful time, while we were quietly watching a deep low system gestating to the north west of us.

TC Winston was named on 11th February and started its southern semi-circumnavigation of Fiji. It stayed well south giving us calm settled weather, then headed through the southern Lau group and on to give Tonga a thrashing. However, the forecasters were suggesting Winston may not be finished with Fiji yet.

A couple of days later it was obvious that we were in the zone. Time to prepare the boat and await Winston’s arrival. The scary part was as Winston approached it deepened and was upgraded to a Category 5 storm. Also it sped up and its arrival was brought forward 24 hours.

We moved up the Denarau mangrove creek on Friday’s afternoon tide, as did many other boats. We were lucky to be able, because of our depth of 1.2 metres, to proceed well towards the head of the creek.

Here we anchored, two bow anchors and two stern anchors plus warps to the mangroves: two forward, two aft and a breast line on each side of the boat. We then proceeded to assist the boats around us to secure their boats. There were 34 boats in total in this small creek and many of the cruisers had never experienced a cyclone before.

By this time TC Winston was already in the process of causing its destruction in northern Lau, Taveuni and Savusavu areas. By 5pm Saturday the wind and rain had started, gradually the wind increased, our wind instruments went skitzo. According to our neighbours at 10pm it was 80 knots, by midnight 100kt. By 1am we could feel the wind abating.

At this time I was talking via Messenger to a friend in Sweden who was watching Winston from afar and relaying Winston’s progress. We got to bed about 3am knowing Winston was behind us and giving the Yasawas a flogging.

Sunday morning was spent removing the shredded mangrove leaves from all external surfaces on Outsider. We learned there was very little damage sustained to any of the boats with us in the creek. By last light Sunday we were able to leave the mossies in peace, we exited the creek and took up a mooring in Denarau Marina.

After hearing of the devastation to the north and in the islands we volunteered to assist in any way we could. A call was put out in the marina for any vessels willing to help Sea Mercy to deliver aid to the islands.

Once again we had friends arriving, after letting them know what we were up to they were pleased to help out. Thursday we departed Denarau with 90 kilograms of rice, 60kg flour, 55x10kg breakfast crackers, 8 cartons noodles, 60 cans meat, 120kg split peas, clothes, tools, tarpaulins, ropes, water bottles, washing powder, soap, torches, 300 litres drinking water and a myriad of other goods. All up, over two tons we calculated.

We motored north with our guests fresh off the plane, into the night anchoring at Sawani Bay. The next two days we pushed 130 miles to windward to our destination of Makogai Island. Travelling along the north coast and past small islands it was apparent these places were hit really hard, the devastation widespread with some villages all but totally destroyed.

We were the fourth boat to arrive at Makogai Island with aid. We have never witnessed such devastation, almost every building was levelled, coconut palms were torn to pieces, the trees were totally defoliated, all small limbs gone and the bark blown off.

The villagers told us how they survived by crawling between the floor and ground, while listening to their houses being torn apart above them. We are astounded that there were no fatalities or serious injuries, had Winston been in the night things would have been very different the villagers all agreed.

On Sunday am we unloaded Outsider in three trips, using the village long boat. We went ashore, did sevusevu with the villagers and got a list of their immediate needs. Drinking water was top priority. We relayed this info back to Sea Mercy.

On Monday we had a delightful downwind sail to Rakiraki where we reloaded the boat and sent our friends back to Nadi in the supply truck.

Donations can be made to Sea Mercy:
www.seamercy.org.