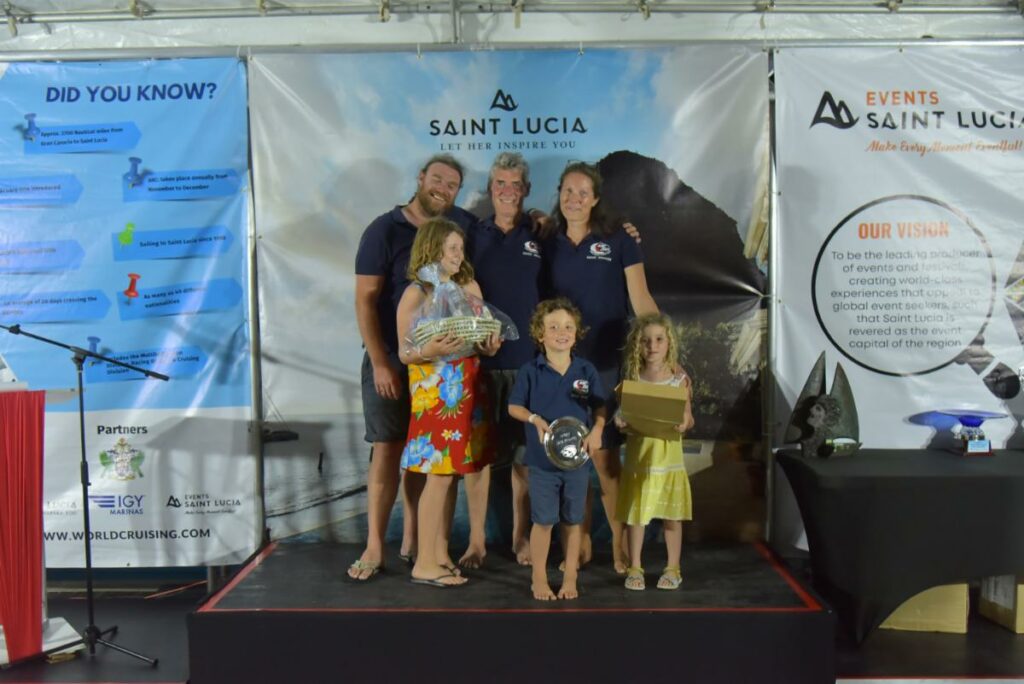 Spirit of the ARC - Magic Dragon of Dart. Pic - ECSL 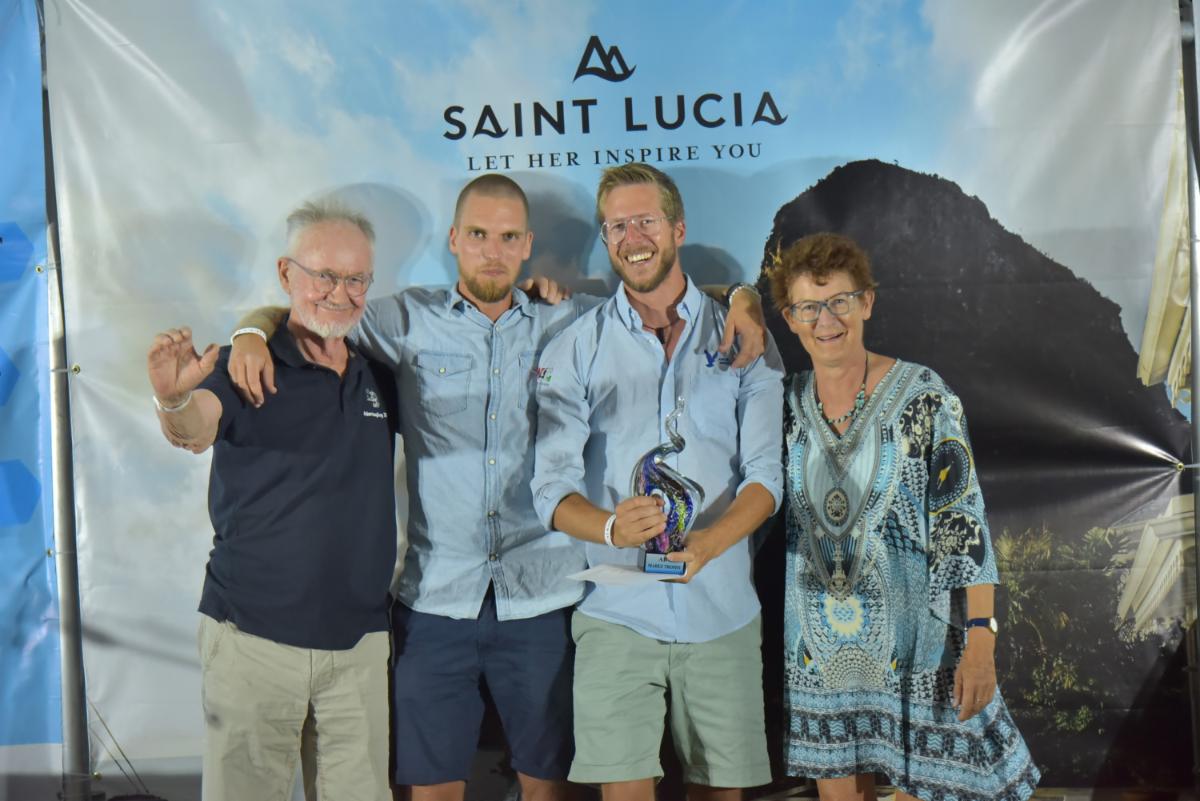 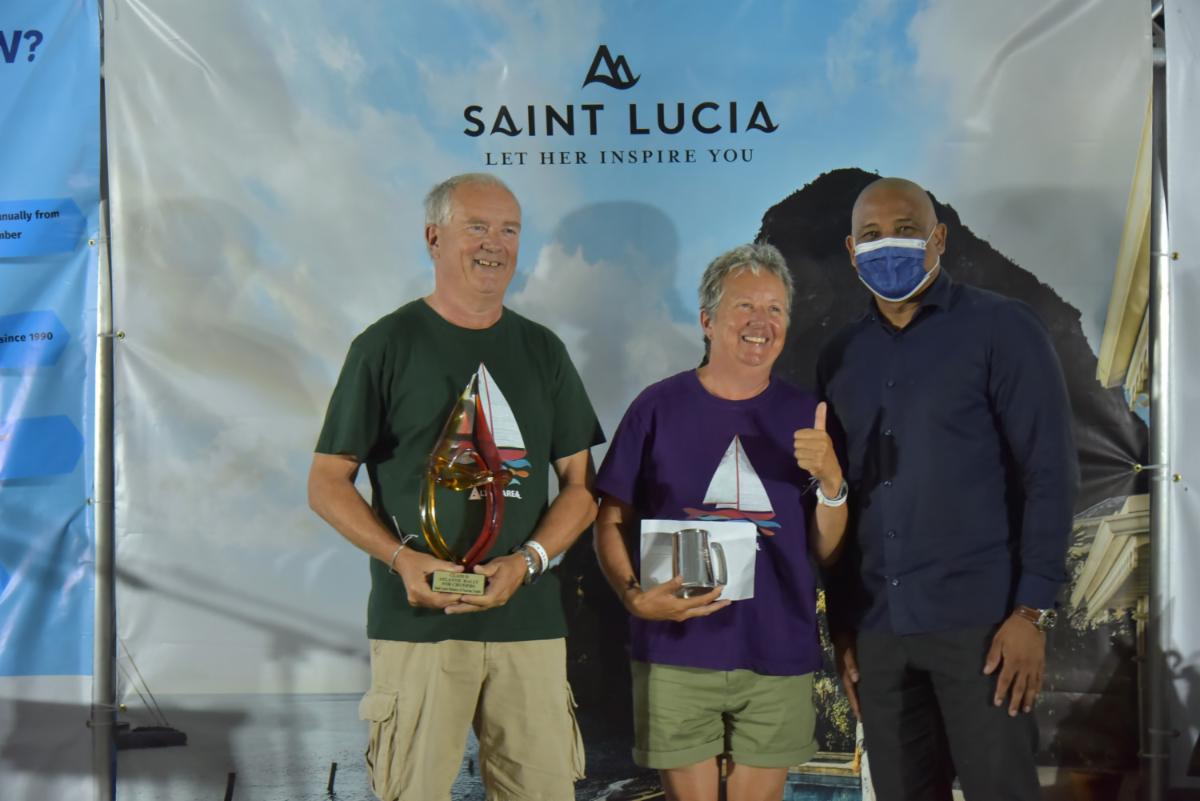 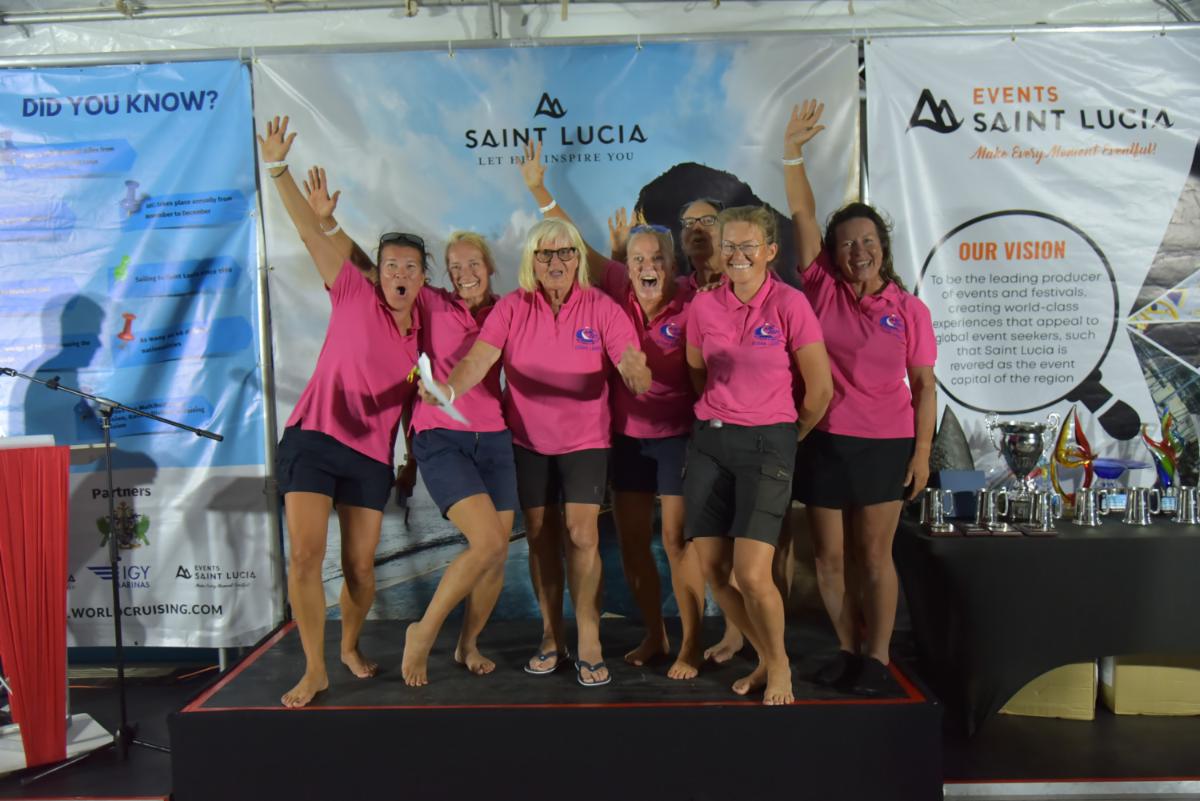 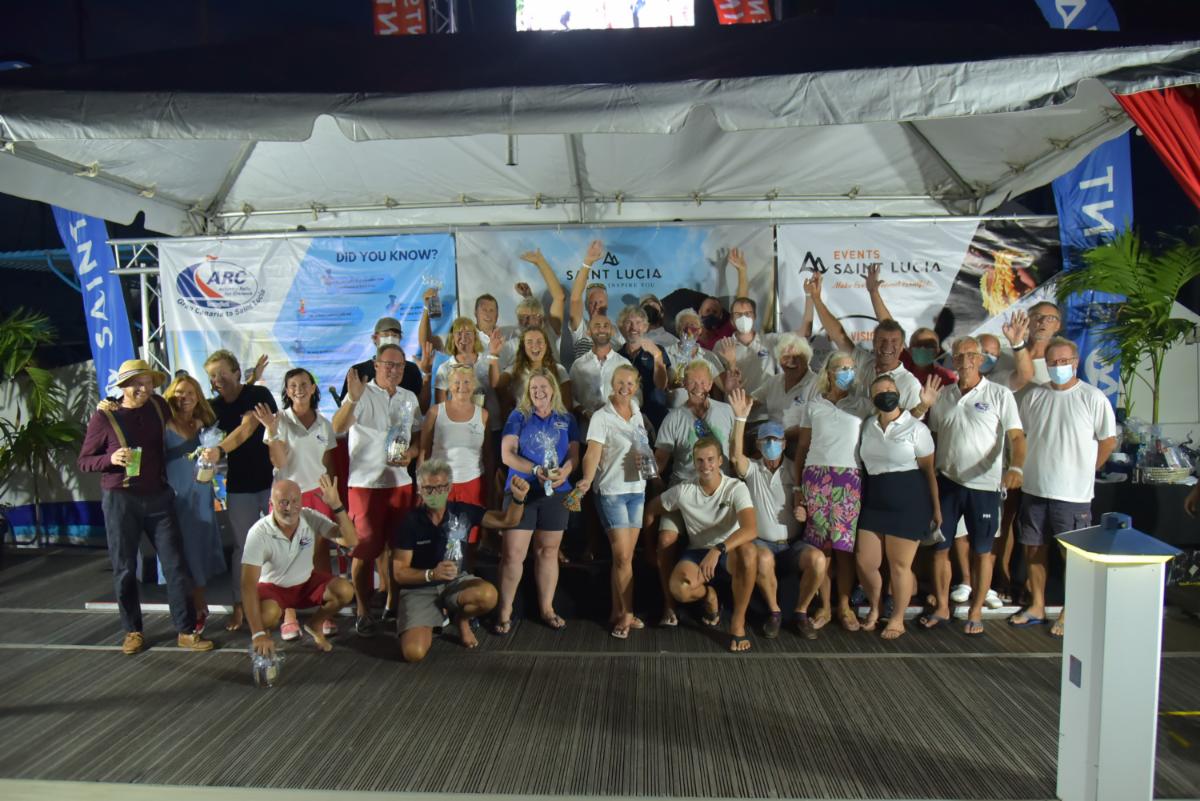 There is no such thing as a ‘typical’ Atlantic Rally for Cruisers (ARC), and 2021 proved again why sailing the same route at the same time of year can produce so many different experiences.

The ingredients of the ARC, the boats and nationalities, ambitions and experience, weather and routing when added together, provide each ARC crew with their own, unique Atlantic adventure.

This time last year, the world was hoping that the pandemic was almost passed, yet sadly it has continued to cast a shadow for the 36th ARC. The success of the 2020 edition added greatly to the smooth running of a second ‘Covid ARC’, with the crews admirably overcoming the challenges of preparing for a long-distance sail whilst following protocols and advice. After the crew-bubbles and mass departure testing for crews in the start port of Las Palmas, which caused three boats to postpone their participation, it was a fleet of 143 boats that set out from Gran Canaria on 21st November.

This year, the weather has been the talking point on the dockside in Saint Lucia; its impact on routing, crew fatigue, boat gear, and sails. Early calms of week one were displaced by strong, persistent trade winds creating an exciting ride across the 3000NM open ocean. For some, who have loved the waves and the thrills of hand steering down big ocean swells, it was an exhilarating journey. For others, it was a more bruising experience with confused seas and waves kicked-up by an unusual cut-off low pressure system to the north of the Azores sending swells south, to encounter this season’s strong NE trade winds.

Regrettably, for the crew of X-Yachts X4.3 Agecanonix, their ARC ended in tragedy when an involuntary gybe in challenging conditions on the northern route, led to the death of crew member Max Delannoy. A sad loss for them, their families, and the whole ARC community of sailors.

Winds and waves were contributing factors that led to the abandonment of a second ARC boat, after Hanse 588 Charlotte Jane III suffered a catastrophic steering failure, 1500NM out from Saint Lucia. Unable to repair their steering, or steer by drogue in the heavy seas, the crew transferred to Oyster 55 Magic Dragon of Dart, one of several ARC yachts that stood by their fellow ralliers overnight. The combined crews arrived into Rodney Bay to a rapturous welcome 9 days later. Subsequently, both Charlotte Jane III and Agecanonix have now been salvaged, once sea conditions permitted.

It was against this background of challenging weather, drama at sea, and emotions ashore that the ARC crews gathered on the dockside of the IGY Rodney Bay Marina, for the annual prizegiving ceremony which marks the close of this year’s ARC. It was a chance to relive the memories of ARC 2021, to celebrate the achievement of all the ARC sailors in crossing 3,000NM of ocean; and to thank the supporters, the many helpers in Gran Canaria and in Saint Lucia, the customs, immigration, and port health officers, and of course the ARC yellow-shirts, who have worked tirelessly to deliver a Covid-secure event.

Local restrictions on public gatherings in Saint Lucia forced a ‘re-imagined’ prizegiving celebration, with the marina docks becoming one big arena, and crews able to join in from the cockpits of their own boats. The 65ft catamaran Flying Ray became the backdrop, with screens and sound system. Party-bags were delivered to all the boats, and crews from other docks were able to buddy-boat and watch the show as well.

ARC Event Director Andrew Pickersgill opened the evening, thanking crews for taking part This year has certainly produced its challenges and we would like to thank you all for your participation in ARC 2021. It has also reminded us that despite advances in technology, the sea and this journey across the Atlantic continues to be real challenge. You should all be extremely proud of your achievement”

At the start of awards for boats in the IRC Racing Division, Andrew Pickersgill invited crews to join together and remember Max Delannoy. The minutes silence broken at the end by an emotional spontaneous round of applause for the crew of Agecanonix.

With the whole dock as an arena, winners were invited from their boats to the podium to receive their awards. 12 Nacira 69, owned by Diego Paternò Castello di San Giuliano and Federico Marchi, and skippered for the ARC by Federico Dosso, scooped the Line Honours for first arrival (Racing) and winners of Racing Division overall.

Assisting in the presentation of the prizes were Sean Deveaux of IGY Rodney Bay Marina, Taddius Antoine, Chairman of the Saint Lucia Tourism Authority, and Hon Dr Ernest Hilaire, Minister for Tourism, Investment, Creative Industries, Culture and Information. Each addressed ARC 2021 participants, commending their achievement for crossing the Atlantic and warmly welcomed them to call Saint Lucia ‘home.’

The ARC is a cruising rally, and in this spirit, there were awards for categories not related to the competition. Biggest and smallest fish, radio net controllers, oldest and youngest skippers were amongst the many prizes. One of the biggest cheers was for the ARC family boats – 33 young sailors, aged from three to 14 sailing on 15 boats this year. Each young sailor received an award to recognise their achievements.

As we have all become used to socialising at a distance, the ARC SSB Radio Net was a hive of activity in 2021 with creating a thriving community. From quizzes to recipe tips, comparing weather and squall activity to fishing brags, those taking part in the Net find it a real highlight in sailing within a fleet of boats. Arriving in Saint Lucia, the ‘Net-Controllers’ all received the warmest of welcomes and there were big cheers at the prizegiving as the hosts put faces to voices and came on stage.

Friends and family following the boats at home have been able to get a flavour of Atlantic sailing from the blogs sent in from the crews during their crossing. Prizes were awarded for the best non-English log to the Chilean crew of Minga and best photos sent in from perennial ARC participant Emily Morgan. For their amusing daily logs, the creative crew of Maalu IVwere presented with the Best Overall Logs prize.

Each year, the highlight of the awards evening is the presentation of the converted ‘Spirit of the ARC’ award. Saved for last in the proceedings, this is given to the crew, or crew member, who, through their extraordinary actions, have demonstrated the spirit of what the Atlantic Rally for Cruisers is all about – safer and enjoyable longer distance cruising, in the company of others. To delighted applause, the crew of Magic Dragon of Dart were called on stage to receive this year’s award, recognising their selfless support of Charlotte Jane III.

Wrapping up the evening, World Cruising Club’s Andrew Pickersgill, thanked all the crews for making ARC 2021 such a special event, and praised Saint Lucia for their welcome and support for all the ARC crews. World Cruising Club will be back in Saint Lucia again in late January 2022, with the first edition of the new ARC January route. Until then, farewell to all the ARC 2021 crews.

For the full results, see: https://www.worldcruising.com/arc/arc_2021_eventresults.aspx?eventid=132