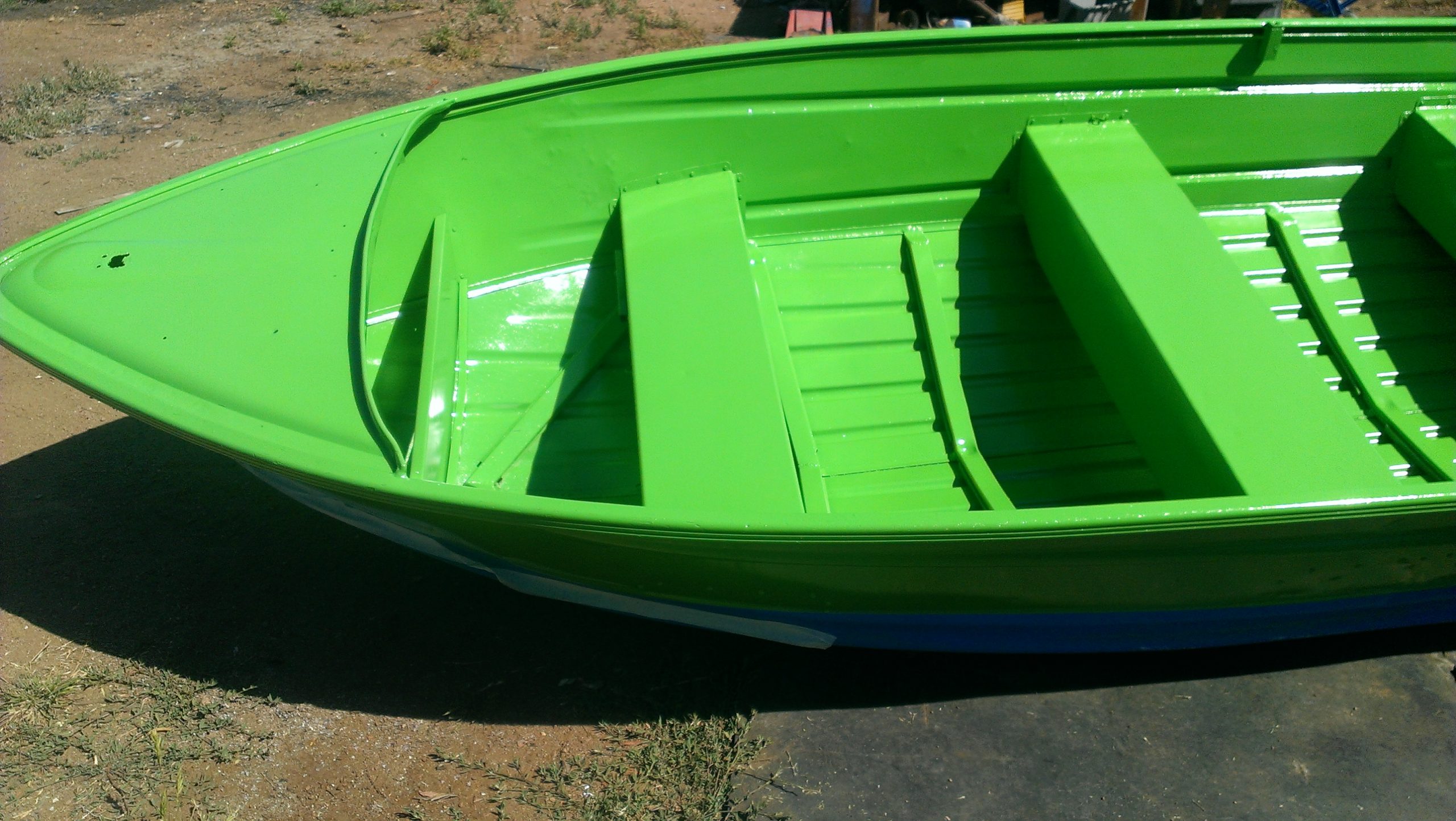 The vessel in question is a De Haviland Norseman 14 foot aluminium dinghy that I suspect was made around 1972.

It has three thwarts and currently pushed by a 11 kilowatt Mercury two stroke. Running properly it will do 20 knots if not loaded too heavily.

It originally came to me secondhand with a built-in plywood floor giving an even deck for fishing. I removed this in 2001 when I purchased it to give me more space and to lighten the boat for the extra weight I carry.

The original trailer was exchanged in 2009 for a new boat show model.

The boat lives permanently on the water as a yacht tender and transfer vessel for a sail training program. The trailer is only used to trailer the boat to regattas or for interstate fishing trips.

The trailer rollers have finally been fine-tuned to hold the bottom of the hull in an even way.

Maintaining the bottom of the tinny from weed and shell has been very basic by hauling up on a beach or boat ramp and utilising muscle power and a scraper. This is required every three months or so.

After owning the boat for thirteen years I decided it was time to bite the bullet and antifoul. My buddy and business partner has a rural business where he brings old farm machinery back to life and resells it so he is a dab hand with paints and spray guns. The vessel was towed to his farm in Mudgee for the face lift.

I did some homework at the bar of the Royal Motor Yacht Club Toronto where I drink amongst the tradies to get the good oil on the types of paints for aluminium, the precoats, undercoats and finishes.

It is important with aluminium to use paints that are very specific. Normal hull paints for timber, steel and ferrocement hulls contain metals that are more noble than aluminium and will set up a reaction in salt water leaving pinholes through the hull, or worse.

Etching the hull and using an etching primer were subjects that took many schooners to resolve. “Your lucky your mate has a sand blaster” I was told. Ha ha.

As soon as the hull, covered with its grey beard of marine growth and shell, was turned over I was handed a hand scraper. “Go to it“ my mate said.

We took the hull back to a kind of rough seashell grit surface. Then a couple of rotary electric wire brushes to take off the shell residue, the scum line that builds up above the waterline due to being slapped by waves in the water all the time.

The aluminium topsides and insides were previously coated with something I called powdercoating, but I am sure it had a more salubrious name. That had to be sanded back.

Only then did the jet water blaster and black sand come out. All the decals, rego stickers and numbers had to come off as well. The hull fittings were unscrewed and finally we had a shiny aluminium dinghy with a rough-etched surface inside and out.

We hosed out the rubbish, then time and again vacuumed the black sand out. This gets into all the tiny crevasses and under the thwarts where it sticks when wet to the polyfoam in the seats built in for buoyancy. This sand, if left as residue, will blow onto the wet paint during spray painting. The surface could be called anti-slip but looks vile.

The first coat was an aluminium etch primer which coated the bottom, top sides and inside. It is very important to have a bind that will hold fast to the hull otherwise the paint will peel with the sun and the hull speeding through the water.

Then we taped the level line for the antifoul. I took this a little higher than the previous scum line to allow for easy maintenance in the future. International aluminium Primacon was used to prepare for taking the antifoul.

Next the antifoul itself, International Trilux.

I had worked out the sums and decided that one litre would give me two coats.

The paint was too thick to spray so we hand painted and rolled and that took most of the litre. Only a little paint left to do the patches that needed a little extra cover.

Then we reversed the paint line and did the top sides and inside with two pack tradesman’s paint suitable for aluminium.

As we were using mainly spray painting the correct thinners were required. First to thin the paint then to clean out the spray gun.

We fed a length of pool hose inside an agricultural water hose to act as an all round fender and screwed this on with stainless self tappers and nuts, bolts and washers. Apart from being a great fender it gives me 15 litres of extra buoyancy.

A good home brew made with hops, was produced to wet the new baby's head.

The colour scheme seems to be a bit bright at first but it grows on you quickly. Easy to spot in rough or smooth water.

It took two of us (well one and a half as I was a raw apprentice at this) three full days of preparation and painting. My mate is a stickler for things being right so I had to do many things over again, even though I thought it would do.

For a couple of hundred bucks I have ended up with what looks like a brand new (lets say many, many thousands of dollars worth) of dinghy.

The sailing school students get a good first impression as they are ferried out to their waiting keel boat and I have a vessel I can be proud of.