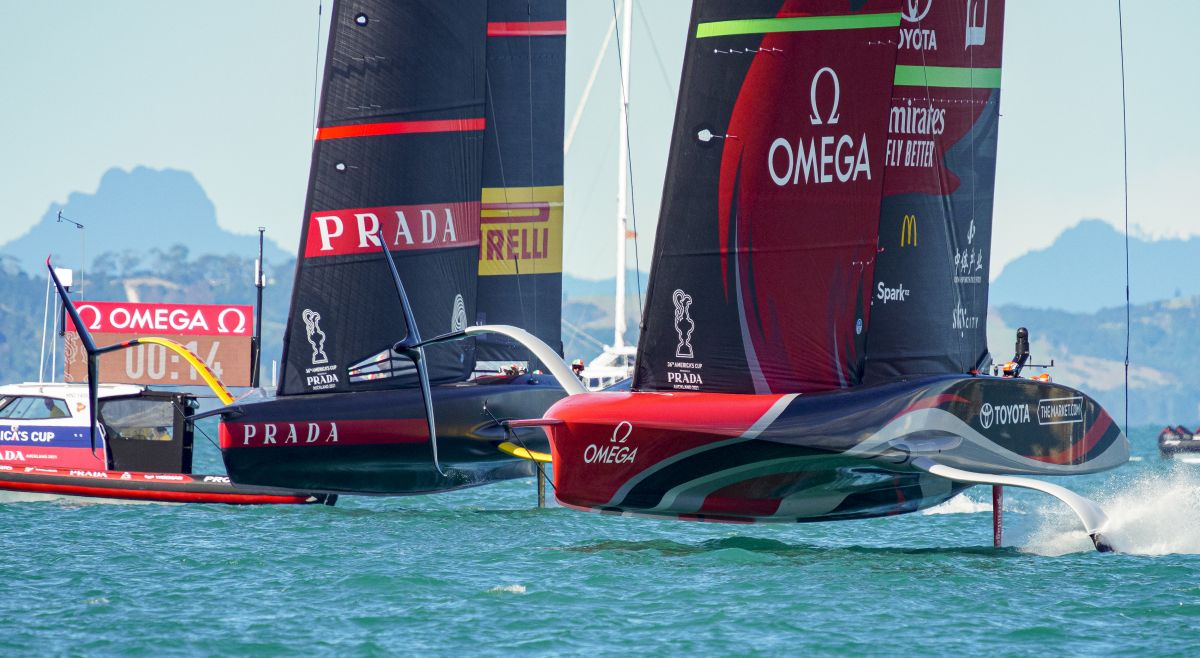 It was another day of “win the start, win the race” in light airs on the Hauraki Gulf today. At times the wind strength dropped below 8 knots but both crews managed to keep their hulls out of the water.

In almost a carbon copy of the opening day on Wednesday, the boat that had port entry, the right to enter the start box first, was able to win the start and control the race.

Luna Rossa had control in the first race of the day, putting the Kiwis under pressure and spreading dirty air over the course.

In the second race, the roles were reversed as Peter Bulring managed to get his time-on-distance right and win the start.

With the Italians making a small error coming into the bottom mark for the first time, when they failed to get their foil arm fully down, the New Zealanders were able to extend their lead to win comfortably.

New Zealand has port entry in the first race tomorrow, when we will see whether the pattern can be broken.

After the first start was halted when spectators were ushered off the race course, the re-start saw Luna Rossa Prada Pirelli enter the pre-start zone on port tack. Emirates Team New Zealand were quick to get onto their tail.

As they approached the right hand side of the zone both gybed to set up for the return to the line. Both were early and needed to kill time but neither wanted to drop off their foils. In addition, neither seemed to want to engage.

At the start Luna Rossa Prada Pirelli had gained a slim advantage and set themselves up to windward of Emirates Team New Zealand.

As the boats headed out to the left-hand boundary the Kiwis were the first to tack. The Italians paused, waited for the perfect moment to tack underneath them. It was a perfect lee bow tack that out pressure on the Kiwis. First punch to the Italians.

Eventually, Team New Zealand were forced to tack away. Already the Italians were looking as powerful in the 9-10 knots of breeze as the pre-event chatter had suggested.

Although both boats were sailing at around 20-22 knots upwind, the real difference between the two was that Luna Rossa seemed to be able to tack more quickly and smoothy too, gaining with each manoeuvre.

By Gate 1 Luna Rossa were ahead by 10sec as they rounded the right-hand mark. Emirates Team New Zealand chose to split and took the left in the hope that they could find different breeze on the downwind leg.

From the air, the breeze seemed to be funnelling down the middle of the course and the Italians were making a good job of identifying the best parts of the course to put themselves in.

By the bottom they rounded the right-hand mark 13 seconds ahead.

By Gate 3 the Italians had stretched out their lead to 27 seconds as they rounded the left-hand gate.

Once again, the Kiwis split and rounded the right-hand gate. The previous leg suggested that the home team were a shade faster downwind at times, but if this was the case would their extra speed be sufficient to eat into the Italian lead?

By the bottom gate for the second time the Kiwis had indeed pulled back but only by a few seconds rounding 22 seconds behind.

Having chosen the opposite mark to round they were putting the Italians under pressure, forcing them to choose between the route they would prefer and the need to cover. But with a lead they didn’t want to give away, the latter won through as they matched the Kiwis tack for tack upwind.

By the last upwind leg the Italians had stretched out even more distance to round 38 seconds ahead. There was now surely little doubt that the Italian boat was quicker upwind in these conditions.

As they headed down the last leg they were now over 500 m ahead.

Twenty seven minutes and 55 seconds after starting race 3 there was another Italian point on the board as Luna Rossa Prada Pirelli crossed the line to take their second win of the series.

For the second race of the day the roles were reversed and it was Emirates Team New Zealand to enter on port.

As the defenders crossed the bows of the challengers, Luna Rossa Prada Pirelli gybed to get onto the tail of the Kiwis. As they did so it looked harder to maintain their pace as they sailed through the dirty air of the Kiwis. A hint of struggles to come?

As the clock counted down to the start, the Italians swooped down to go for the hook but at the last minute appeared to decide against it, luffing back up to stay on the windward side of the Kiwis. As they approached the line both teams looked early as they tried to slow down without splashing down.

The result of this and the dive down to get the hook by the Italians meant that while the boats were aligned the same as in the first race with the Italians to windward, this time the pair were much closer. This time the Italians couldn’t live in the windward position and were forced to tack away leaving the Kiwis to continue to the left-hand boundary.

Meanwhile, the breeze had dropped to 8 knots.

As Luna Rossa headed out to the right-hand side of the course and tacked they were on for a head to head when they aimed back at the Kiwis. Team New Zealand tacked underneath them, forcing the Italians back to the right.

The Kiwis seemed happy to stay clear of the Italians as they headed back out towards the left-hand boundary once again, their onboard comms suggesting they had seen more breeze on this side.

When they came back together, this time the Kiwis crossed the Italians to take a slim lead, rounding the left-hand mark of Gate 1 just 9 seconds ahead.

The Italians took the opposite mark splitting to the right-hand side of the course.

As the pair crossed for the first time on the downwind leg, both seemed happy to explore opposite sides of the course suggesting that there were few differences to be seen with the breeze.

In the closing moments of leg 2, Luna Rossa Prada Pirelli seemed to struggle with their gybe and slowed down significantly for a few moments. They could no longer lay the gate, costing them further distance and time on Emirates Team New Zealand who had passed through the gate cleanly to stretch their lead to 34 seconds. This was a good gain for the Kiwis and a costly manoeuvre for the Italians.

Up leg three, the distance between the two remained exactly the same, what didn’t was the breeze which, having dropped a little further was now becoming less stable and trickier to read.

By gate 4 the Kiwis had confirmed once again how strong they were on the downwind legs and had stretched their lead even further to 48 seconds.

Talk onboard both boats was of the breeze dropping, the gap between them may had grown, but the pressure was rising.

But as the Kiwis were approaching the top gate for the final time they had held their nerve, sailed smoothly and this time had stretched their lead on an upwind leg as they rounded 58 seconds ahead.

A home win looked like it was on the cards. A few minutes later it was. The scores were level once again.

With Auckland now in COVID19 Level 1, the America’s Cup Race Village, which is free to enter can now begin an exciting roll out of village activations. Full entertainment schedule and details visit www.americascup.com.

America’s Cup Event have capacity limitations due to the ability to be able to evacuate people safely. Crowd capacity limits are applied to 8 zones within the race village – for example Te Wero Island – and these are expected to be reached. This will require ACE to implement its “full house” plan and to stop entry into areas which have reached capacity. Where space allows, the public will be directed to other zones within the village. On race days we will use our channels to provide updates to the general public on capacity in the race village including TVNZ, GoldAM, AC36 website and social media and VMS display boards.

Post-race Press Conferences are held approximately 75 minutes after the end of the last race and are streamed live on YouTube and americascup.com

The Match will resume tomorrow 13th of March at 4:15 pm NZT weather permitting, with no possible start later than 6:00 pm NZT. Race days in March are Sunday 14, Monday 15 and each day after that until either Emirates Team New Zealand or Luna Rossa Prada Pirelli reach seven wins.

Race can be watched live on Facebook, YouTube and americascup.com and a full replay is available here.