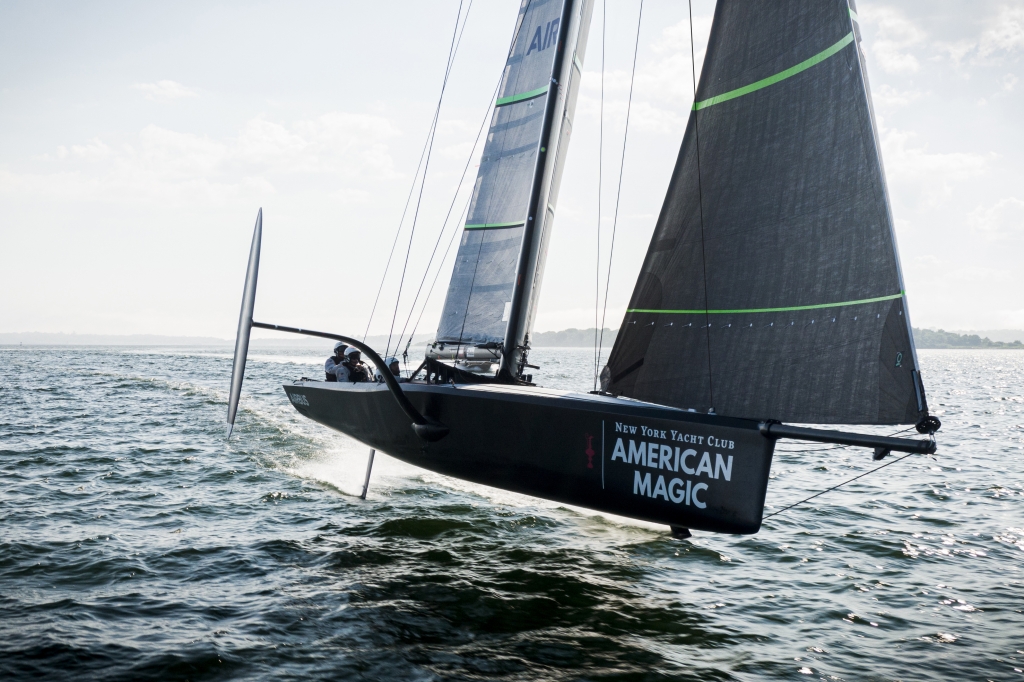 AkzoNobel’s Awlgrip brand will be the official coatings supplier for New York Yacht Club’s American Magic team, which will challenge for the 36th America’s Cup.

The American Magic entry will use Awlgrip’s HDT Flag Blue as the hull color for their first AC75 racing boat. The high performance coatings system used on the boat will feature AkzoNobel’s new High Definition Technology (HDT) topcoat, which offers unrivaled gloss, depth of image and reparability in a single product.

American Magic won’t just stand out because of its striking paint job (which will also include Awlgrip topcoat and Griptex non-skid component on the deck). The team’s AC75 class boat undergoes a striking transformation when it reaches a certain speed, rising up on hydrofoils and cutting across the top of the waves with its hull fully clear of the water.

“We’re delighted to team up with American Magic for one of the sporting world’s most prestigious events,” says Jean Michel Gauthier, AkzoNobel’s Global Business Director for Marine, Protective and Yacht Coatings. “Only the best will do at this level of performance and we’re confident that our innovative products and the team’s state-of-the-art racing yacht will prove to be a winning combination.”

AkzoNobel spent more than three years developing and trialing its Awlgrip HDT topcoat, which included collaborating closely with painters in the Volvo Ocean Race Boatyard as the official coatings supplier for the 2017-18 edition. A key feature of the product is that it requires fewer layers of paint to be applied – resulting in crucial weight savings.

“For the AC75, it’s important for us to use the most advanced and durable paint products on the market,” adds Terry Hutchinson, Skipper and Executive Director of American Magic. “HDT coatings were the perfect choice for us as we pursue the America’s Cup.”

“We’re always looking to push ourselves to the next level in order to achieve more – just like the sailors in the America’s Cup,” continues Matt Anzardo, AkzoNobel’s Yacht Marketing Manager for North America. “When it comes to our new Awlgrip HDT topcoat, it’s all about accelerating our innovation and giving our customers an outstanding, unbeatable finish. We’re excited to see it in action.”

AkzoNobel’s yacht coatings are a proven solution for America’s Cup teams and have been used in previous campaigns. However, the new partnership with American Magic marks the first time AkzoNobel has been an official coatings supplier to a participating team.

The next America’s Cup will take place in New Zealand in March 2021.