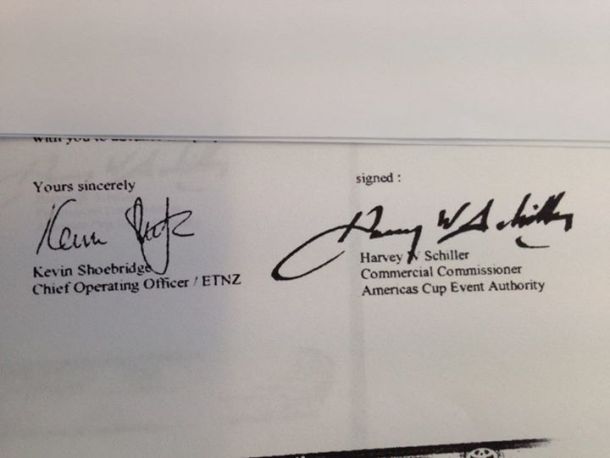 According to a report in the NZ Herald, the qualifying regatta scheduled for early 2017 won't be held in Auckland, but ETNZ says, “That's news to us” and produces a signed agreement to back their claim. It's a big issue for the Kiwis as reportedly government funding for the team relies on the regatta being held in Auckland.

Here are the opening paragraphs from the story:

America's Cup Commercial Commissioner Harvey Schiller has notified Team New Zealand that a qualifying regatta in early 2017 will not be awarded to Auckland.

Team New Zealand refused to talk on the record, saying it was in the middle of a legal wrangle with the America's Cup organisers.

However, sources within the camp said the latest development was nothing but the “customary arm wrestling” that occurred prior to any America's Cup.

They said Team New Zealand had an agreement with the cup – signed by Mr Schiller himself – that there would be a qualifier series in Auckland.

Read the full story, including the Facebook posts, here.

Grant Dalton responded with a measured message via video: