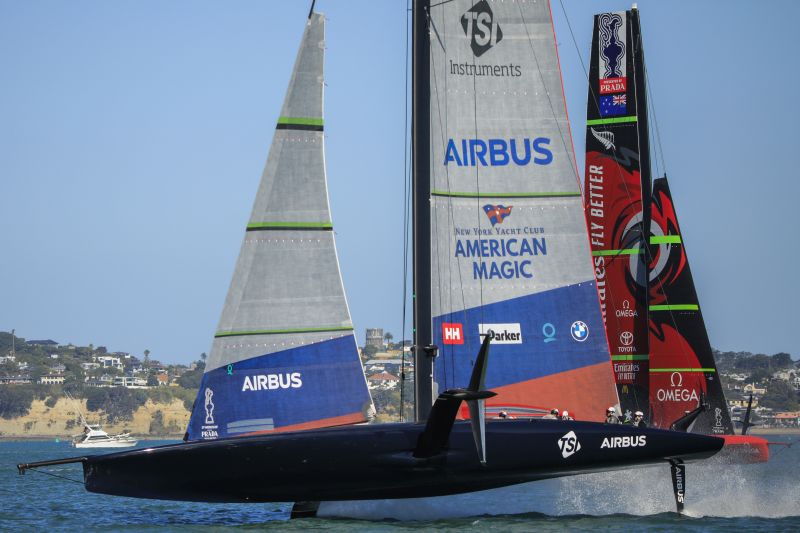 Races where held with a south-westerly breeze ranged between 15 and 19 knots. Top speed of the day was 49.1 knots reached by Emirates Team New Zealand.

Both boats were on time and at speed as they entered the starting box. At the start Emirates Team New Zealand headed out to the right hand side of the course while Luna Rossa Prada Pirelli performed a perfectly executed tack just before the start to cross the line on the pin end. As both teams headed out to opposite sides of the first beat the race looked like it could be close, but as the pair came back for the first cross there was the first hint as to just how much more pace the Kiwis had.

Around the first gate Emirates Team New Zealand led by 41 seconds, a big gap for just one leg of racing and, from there, the distance simply grew with the Kiwis hauling out a winning margin of 3min 13seconds by the finish.

“We got a little left hand shift on the first lap followed by a right hand one on the way down so it was an easier race for us, but we’re really pleased with how everything went,” said Emirates Team New Zealand skipper Peter Burling.

Just minutes before the start INEOS TEAM UK participation seemed in doubt as they reported technical problems, but with seconds to go they confirmed that they were now intending to compete.

Off the start, American Magic quickly gained the upper hand on the opening beat of this three lap race. By the time the Americans had reached the first gate they had pulled out a 50sec lead over INEOS TEAM UK.

From here the race only went one way as New York Yacht Club American Magic increased their lead rapidly to well over 2000m midway through the race. Their lead was accentuated following control problems aboard the British boat that saw them lose control on one of the downwind legs.

“It’s completely locked out here, the rudder just lost grip,” said skipper Sir Ben Ainslie over the crew comms as Britannia crashed onto port following a gybe. And it wasn’t the last of their problems as control issues continued to dog their race.

In the meantime, American Magic cruised to victory 5min ahead.

The clock was counting down for INEOS TEAM UK (GBR) from the moment they crossed the finish line in Race 2. Technical problems in the previous race had hampered their performance, now they had minutes to ensure that their boat was ready to face Luna Rossa Prada Pirelli (ITA).

In the opening stages of the pre-start it looked as if the British team had got back into shape as they entered the start box at speed and on time from the left hand side.

Meanwhile the Italians entered in a similar manner, but as the clock counted down to the start and INEOS TEAM UK tacked onto starboard to line up for the start, Luna Rossa Prada Pirelli came in on port, tacked underneath the British team who now had to keep clear as they were the windward boat.

AC75 boats have safety zones around them to help avoid any physical contact, breaching these zones gains a penalty and it was INEOS TEAM UK that started their race with a penalty as the umpires deemed that Sir Ben Ainslie’s had not kept clear.

Within seconds Luna Rossa Prada Pirelli had accelerated away from the incident, up on their foils, at speed and had pulled out a 500m+ lead as both boats went up the left hand side of the beat.

By the first windward gate the Italians were 1:09 ahead of INEOS TEAM UK, a physical lead of 1000m. But shortly after the British team went through the gate skipper Ben Ainslie announced to the race committee that they were retiring from the race following a technical failure.

Would this be the match of the day? If the speed and timing that American Magic (USA) executed on their entry into the box was evidence, Emirates Team New Zealand (NZL) were in for a solid challenge.

In the pre-start the Kiwis entered slowly and didn’t seem to want to engage with the Americans. Emirates Team New Zealand looked very slow, did they have a problem?

At the first windward gate American Magic rounded 0:15 ahead as they screamed downwind to the righthand boundary of the course, the boats 275m apart.

This was already the closest race of the day.

As the gusts swept across the race course, the Kiwis were able to sail deeper at times as they took a more direct route to the bottom gate. But to do this meant putting in a few more gybes in the process, negating any advantage they had gained.

By the bottom gate they were 17 seconds behind as they rounded the same left hand mark on the course as American Magic.

Taking the decision to put in a snappy tack onto port, a very difficult manoeuvre at speed, didn’t go well and they failed to keep their boat on its foils. Suddenly the margin had doubled from 200m to 400m.

In subsequent manoeuvres, they continued to lose distance raising speculation that they had a problem on board.

By the second windward gate, American Magic had stretched their advantage to 0:26. But while the distance had grown on the second upwind leg, Emirates Team New Zealand gradually hauled back a few seconds to pass through the bottom gate 0:20 behind.

Choosing the left-hand mark allowed them to take the opposite side of the course before then instigating a tacking duel. This eroded the Americans advantage as the Kiwis were now executing better tacks between the two.

By the windward gate the margin had reduced to 70m, American Magic still had the advantage but only just and they were being pushed hard. But at the left hand mark at the final upwind gate Emirates Team New Zealand got to the zone first and gained rights over American Magic to round inside and ahead. A protest was dealt to the Americans and cleared shortly afterwards.

Meanwhile, Emirates Team New Zealand gybed quickly but were in less wind and when the pair came back together American Magic had regained their lead and had engineered a better approach to the finish to take the win.

Post-Race press conferences start approximately one hour after the end of the last race and will be streamed live on americascup.com, Facebook and YouTube.

Races will resume tomorrow at 3:00 PM NZT weather permitting. Race course and exact start time will be published every racing day on the americascup.com and social media at 10:30 AM.