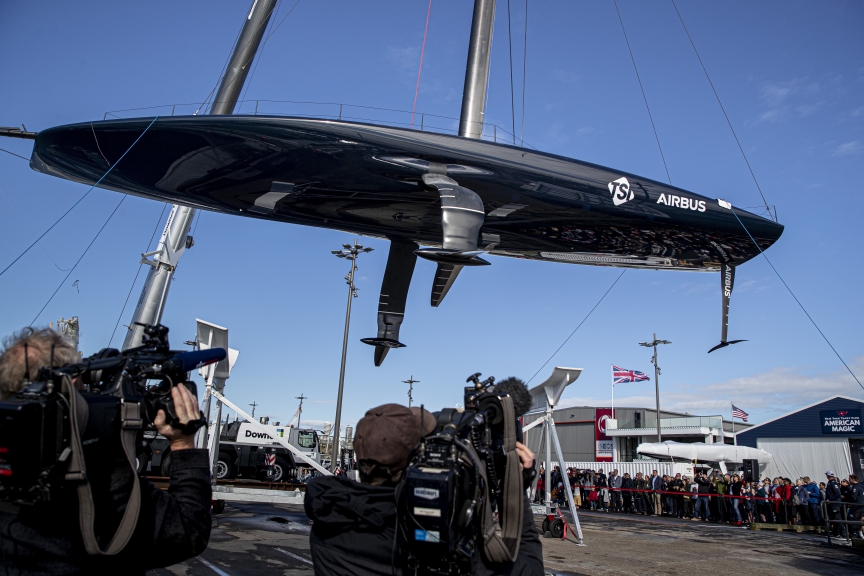 After being the first team to bring an AC75 up on foils last year, American Magic set a new record as PATRIOT was the first race boat to touch the water.

The official launch ceremony took place this morning at the team’s new base on Auckland’s Viaduct and the team revealed an AC75 that, as expected, is a significant evolution from their first boat especially in terms of hull shape.

“We could not be more excited to get PATRIOT into the water after all of the hard work it has taken to get her designed, built, transported and fitted-out for sailing,” said Terry Hutchinson, Skipper and Executive Director of American Magic. “When you think about the whole course of the program and what the team has achieved with the Mule, DEFIANT and now with PATRIOT, it's pretty remarkable. I think what PATRIOT represents is an incredible display of teamwork, design, production and everything our team stands for. It’s a pretty proud moment for us.”

“I think for the team this is an amazing day, ” said Dean Barker, American Magic's helmsman. “We’ve done some great work out on DEFIANT [our first AC75] and it has been a real journey through three different sailing venues. To be launching PATRIOT now, here in Auckland, and knowing we are in the final run to the start of racing is exciting. Without any regattas yet, we still do not really know where we sit in the whole pecking order. We have to trust that we have followed our process all the way through, and I think the final product we are putting in the water today is very special.”

U.S. Consul General Katelyn Choe christened the yacht, and shared a few words with the team prior to breaking a champagne bottle over the bow. “I am so thankful to each of you for bringing the spirit of American magic to us, which feels even more poignant during these uncertain times. We can’t control the wind, but we can direct the sails,” said Choe. “It is my true honor and privilege to stand with you today to honor the new boat’s name and celebrate all of the patriots in our life.”

In terms of resuming sailing operations, the team is looking to press the new boat hard after initial systems tests are complete. Barker said that the schedule will be aggressive over the coming weeks before the first preliminary races during America's Cup World Series Auckland (December 17-20, 2020).

“We have to hit the ground running flat out [in PATRIOT] because every day is precious in terms of being ready for racing. Given the time frames of the design work needed and everything else it sort of forces you to be running a reasonably late time frame [for the campaign], and we know we have our work cut out for us to be ready.”

In terms of how the new boat differs from DEFIANT, Barker said that every new boat launch involves a familiarization process. “The most notable difference is the helm position, so it’s going to be quite a different perspective [for the helmsman] and it's a lot more forward on the boat compared to DEFIANT. We are going to quickly adapt and we are very aware of the changes we need to make. Every boat has its different tendencies and different traits and we hope PATRIOT's biggest trait is that it’s going to be a lot faster.”

American Magic Principal Designer Marcelino Botin said he couldn't help but reflect on the campaign as a whole as he watched the boat being lowered into the Waitematā Harbor.

“This team didn’t exist three years ago, and now we have three boats built [including the AM38] and two AC75's launched,” said Botin. “The first thing we need to focus on next is to make sure the new boat is sailed the way we want it to be sailed. We’ve got some predictions of how that should be [done] and we want to make sure that we help the guys on the boat follow our plan. Obviously after that [initial phase] there’s evolution and changes, but the first thing is to do analysis of the performance. We are all interested in knowing how the boat performs compared to our predictions and compared to our previous boat.”