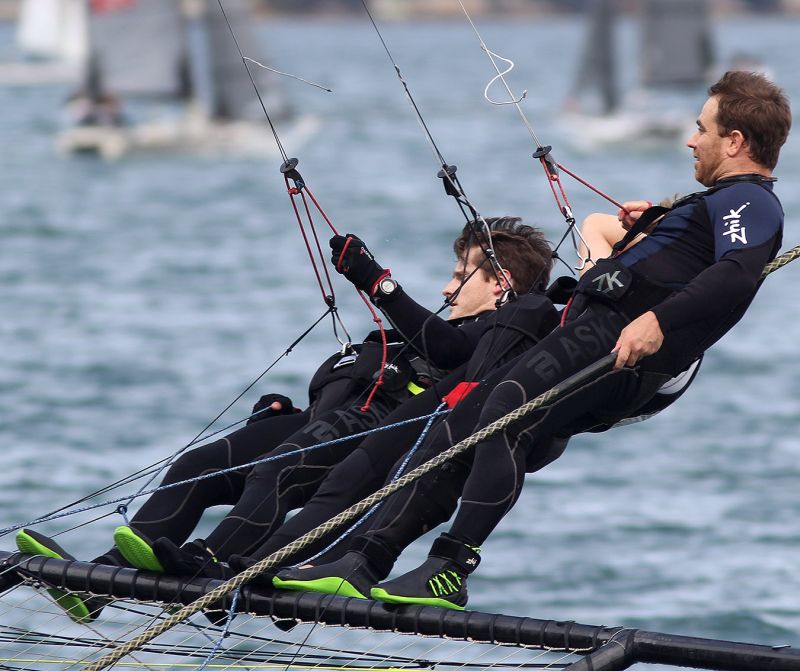 Andoo - pressure shows on the face of the winning skipper

19/10/2020
The Marcus Ashley-Jones led Andoo team produced a powerful last lap of the course to score a thrilling come-from-behind victory in the Australian 18 Footer League's Race 2 of the Spring 18ft Skiff Championship on Sydney Harbour today.
After trailing the leader by 50s at the second windward mark, Ashley-Jones and his team mates Jeronimo Harrison and Cam Gundy revelled in the freshening breeze, which went from 8-10 knots in the East to 14-15 knots South-East.
The early leader The Kitchen Maker-Caesarstone (Jordan Girdis, Lachlan Doyle, Tom Quigley) were sailing a great race but found the changing conditions too testing for the lighter crew weight.
Andoo grabbed a narrow lead as the pair approached the final windward mark and edged away on the tight reach between Shark Island and Clark Island to finish 33s ahead of The Kitchen Maker-Caesarstone.
The first two teams benefited from the 3-buoy format and were clearly ahead of the rest of the fleet for most of the race.
Strongest performer from the backmarker group was the Winning Group team of Will Phillips, Seve Jarvin and Sam Newton, which finished a further 1m15s behind The Kitchen Maker-Caesarstone, in third place.
Australian champion tech2, skippered by Jack Macartney, finished in fourth place, ahead of Smeg (Michael Coxon), Yandoo (John Winning) and Bird and Beat (Tom Clout).
Following the two races staged so far, tech2 heads the points table on six points, followed by winning Group on 9, The Kitchen Maker-Caesarstone and Smeg on 10, with The Oak Double Bay-4 Pines (Aron Everett) and Shaw and Partners Financial Services (Jim Colley) level on 12 points.
The race started in a 8-10 knot Easterly breeze and produced a number of lead changes as the fleet worked its way from the start at Robertson Point on the north side of the harbour to the windward 3-buoys marks in Rose Bay on the south.
The Kitchen Maker-Caesarstone and Andoo took advantage of going to the 'red' buoy to lead from Bird and Bear, Noakes Blue (Andrew O'Brien), Yandoo and a large group of closely-bunched teams.
With clear air in the light breeze the two leaders edged away from the rest of the fleet to set up an unbeatable position by the half-way point, and were never really challenged.
The strong Smeg team were caught up in the bunch during the early stages of the race but showed the class of the team with a very strong performance over the concluding stages
Race 1 of the Club Championship in conjunction with Race 3 of the Spring Championship series will be conducted next Sunday, October 25. The race should provide spectators with a great insight into the major championships later in the season.
Spectators can follow the racing on board the club's spectator ferry, however due to the COVID-19 policy, numbers are limited. Booking online through the club's website www.18footers.com is essential. https://www.18footers.com.au/18-footers-sailing/spectator-ferry/
For those unable to make it out onto the water, AeroMedia Live Broadcast team will be on Sydney Harbour to capture all the action.  Live streaming is available at www.18footers.com by clicking on the '18 Footers TV' link.
– Frank Quealey, Australian 18 Footers League