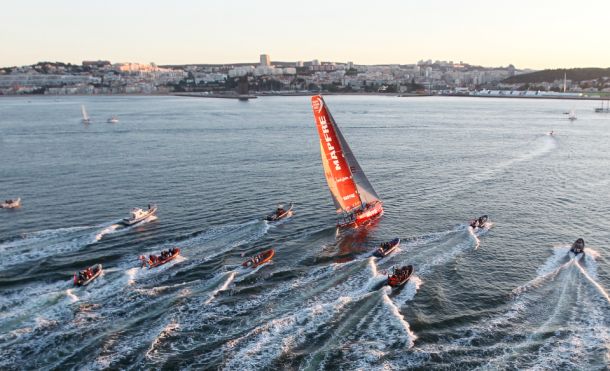 LISBON, Portugal, May 28 – For a man whose boat finished only fifth in the transatlantic Leg 7 of the Volvo Ocean Race, Abu Dhabi Ocean Racing skipper Ian Walker was sporting a surprisingly large smile on Thursday.

In the last edition in 2011-12, the Briton had entered Lisbon as leg winner and the Portuguese capital also has special importance for him as his crew’s European pre-race training base. But there was not a particularly happy ‘homecoming’ for Walker and his seven crew members just after dawn on Wednesday, as they trailed disappointingly in the wake of Team Brunel (Bouwe Bekking/NED), who in turn only just saw off a challenge from MAPFRE (Iker Martínez/ESP) to cross the finish line first after the 2,800-nautical mile stage.

Yet still, Walker and his men were beaming like winners. “Yes, it was a very difficult leg for us, very frustrating. In fact, the best bit of it was getting off the boat at the end,” he joked.

But thanks to Team Alvimedica (Charlie Enright/USA) who took the third podium slot after what their skipper described as a “knife fight with spoons” against Dongfeng Race Team (Charles Caudrelier/FRA) in a slow-motion battle into port, Walker’s mood remained buoyant.

The Chinese-backed boat’s fourth place in a leg, which they had led for long periods, meant that Caudrelier and his crew only took one point away from Abu Dhabi Ocean Racing’s six-point overall lead and Walker continues to occupy a very strong position indeed with two ‘sprint’ legs remaining.

Walker told a news conference after the arrivals: “I was proud of the guys. Everyone kept fighting and it just shows how you have to keep fighting. We could have even got third out of that finish after a week of torture. At one point it looked like Dongfeng could have won the leg and we could have finished fifth or sixth, so in many ways we got out of jail and I don’t think we had a lot of unhappy faces at the end.

“We’ve now got two legs to go and we’re five points ahead. I’d have bitten your arm off if somebody had offered me that in Newport at the beginning of the leg, let alone at the start of the race.”

Enright was also in good humour after winning their thrilling dogfight with Dongfeng Race Team over the final miles, following a botched manouevre by Caudrelier’s crew. His boat catapulted from fifth overnight to claim their third podium finish of the race so far.

“It was a very good morning for us, that’s for sure,” he conceded. “We had a ridiculous, excruciating 20-tack game of attack-and-go with Dongfeng. I told Charles it was like a knife fight with spoons. It was all pretty sloppy.”

Caudrelier was trying to find some comfort after watching a vital point slip through his fingers.

“We are still second overall, and for sure, we will try to fight to keep this place and hopefully come back,” he told the conference. “Right now, I’m trying to control my anger. But I will see my family and try to forget everything and be positive for my team.”

Meanwhile, Team Vestas Wind’s Australian skipper Chris Nicholson was excited at the prospect of seeing his totally rebuilt boat returning to sailing on Saturday (May 30), after their collision with a reef in the Indian Ocean on Leg 2 on November 29. He is still taking nothing for granted after being out of the water for so many stages while the reconstruction took place in Persico’s boatyard in Bergamo, Italy.

“We need to be out on the water and make sure we’re reliable for the race. At the moment, touch wood, everything looks on track for that,” he said.

Nicholson's team has a week to prepare for the following Saturday’s Lisbon In-Port Race before joining the rest of the fleet for the Leg 8 departure for Lorient on June 7.