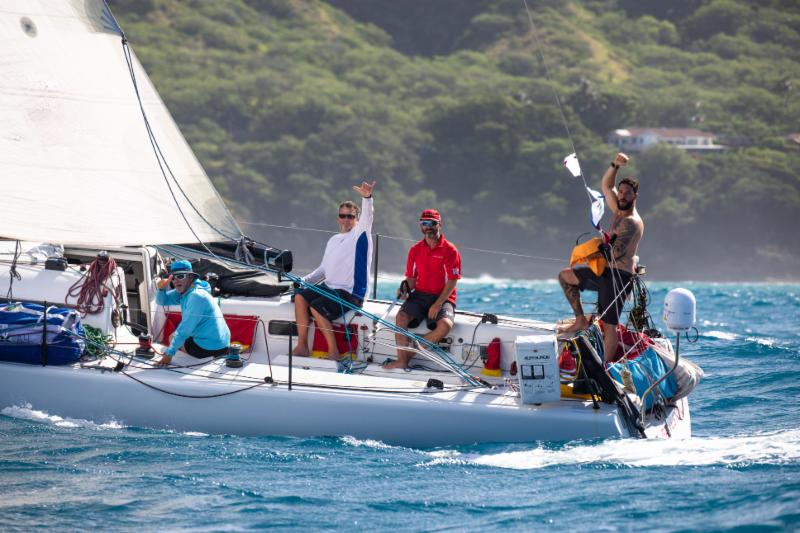 HONOLULU, HAWAII – With Jason Seibert's Schock 40 Gamble making it across the finish line this morning after a long passage of almost 11 days, the Transpacific Yacht Club can declare all boats have finished this year's 50th edition to the LA-Honolulu Race. The final tally of boats completing the course successfully is 81, with 678 sailors aboard. Nine yachts retired from this year's race: seven returned to the mainland, one continued to Hawaii, and one sank at sea.

Nearly without exception, all were glad they came, with plenty of tales of adventure and challenge running the gamut of topics common to ocean racing: high speeds and low speeds, gourmet cooking to freeze dried mush, perfect moonlit nights to scary squalls, freezing cold to baking in the sun with no relief. For some the trip was without incident, while others ran into one problem after another and the trip was spent troubleshooting these to get them to Hawaii in one piece.

The skipper of the last finisher had a lot of this onboard, but admitted often the boat was less an issue than the team being able to adapt to this high-speed, low-freeboard canting-keeled rocket ship. Seibert, from Lakewood Yacht Club in Seabrook, Texas, also had other challenges ahead of the race: he had his boat measured in accordance to race requirements, but due to the boat's canting keel needed more assurance presented to the event's technical committee that the boat could comply with other safety and stability rules. So he knew modifications were needed.

It turns out that just understanding these requirements to know what to modify is a challenge, being buried in the arcane language of the ISO standards. For Seibert Transpac has been a dream of his to do, but being in Texas he was running short of time in April to have everything done to make the race.

“We finally got the calculations done and approved, we were fortunate to find a sponsor, and I drove the boat to San Diego,” said Seibert. “The keel normally cants to 55° the calculations showed we needed to limit this to 37.5° to meet the requirements. So we removed the bulb, re-set the stops on the keel system, re-attached the bulb, checked the stops, then re-measured the list angle after launching. Everything checked out.”

It was on the high-speed reaching legs in the beginning of the race where Seibert feels they were most compromised in performance by missing the normal stability needed for their sail plan, so the team had to shift gears to find correct solutions. And when the breeze went aft the boat was “a handful” to drive due to its light weight and the confused sea states: driving took full attention, and Gamble did not have many experienced drivers aboard.

“The boat took everything we threw at it,” said Seibert. “We just needed to understand better how to handle the conditions. I'm still happy – we set out to get here, and we're here.”

For the next several days, Ala Wai Harbor will be abuzz with activity as the Aloha welcome parties shift to seeing newly showered and shaved race crews rinse, dry, and fold sails and gear for storage or shipping, while the delivery crews start coming in to make their lists, fix the systems that broke, and make ready for the deliveries back to the mainland. The Australians are preparing for a longer trip headed west and south for the South Seas en route back to Oz. Others are readying their boats for delivery back to California on one of the Pasha Hawaii roll-on roll-off ships on their regular service to and from Hawaii.

Many will stay with friends or family for a short holiday here either on Oahu or another island, some will attend the evening sponsor parties, and some will attend the Navigator's debrief meeting on Friday morning. Some have flown home and will come back just for the Awards Ceremony on Friday where an impressive celebration awaits with Hawaiian entertainment, slide and video shows of the race, and dozens of stunning trophies will be awarded to celebrate another successful edition of this great race.

And some don't have many plans at all, other than lay by the pool, sip on a Mai Tai, and revel on how good it feels to be back on terra firma.