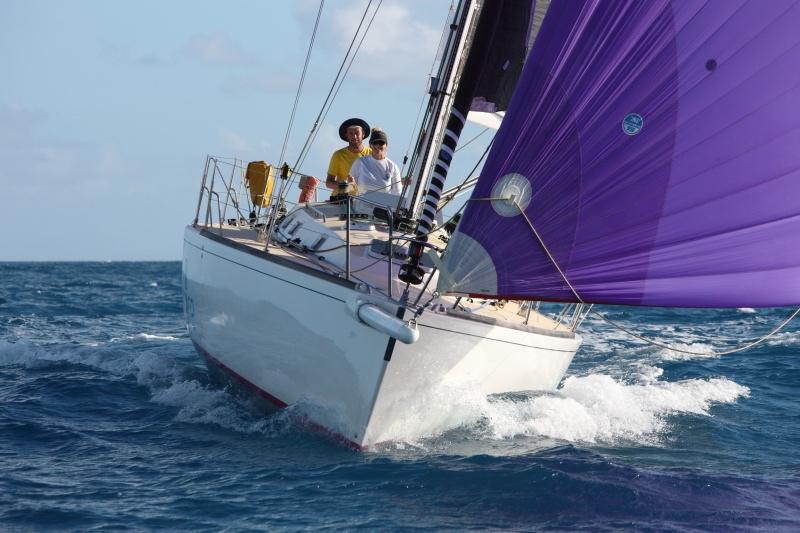 Nunatak arriving in Grenada after a Transat. Photo Credit: RORC.

28/03/2016
Fresh from her impressive first season shorthanded racing, Welsh adventurer Elin Haf Davies is already lining up for her next challenge with team aparito digital health – an impressive all female crew taking on this year's 3 Peaks Yacht Race.
Davies, who in her first year of RORC double handed racing has competed in the Fastnet, RORC Transat and Caribbean 600, has teamed up with solo sailors Pip Hare and Nikki Curwen while Welsh TV presenter and ultra-marathon runner Lowri Morgan will be running with Jo Jackson a team mate from Davies' record breaking Indian Ocean row in 2009.
“The 3 Peaks Yacht Race is a uniquely challenging event in every way,”' says Elin Haf Davies. “It combines some hard core marathon distance fell running with sailing and navigating around some of the most challenging coasts of the UK with a minimal crew.  There is every element you could possibly imagine to test both mind and the body, not forgetting the fact that we will be allowed to row the boats if we get becalmed.
“I believe that we have an incredibly strong team, we are all strong athletes in our chosen sports, regardless of gender.  Lowri is an incredibly experienced distance runner in all environments and Jo has completed the Marathon de Sables and an ironman.”
Interestingly the three nominated sailors, Elin, Nikki and Pip were all taking on the Atlantic at the same time in late 2015; Elin and Pip both double handed in the RORC Transatlantic Race and TJV respectively and Nikki, singlehanded in the Mini Transat.
The team will be skippered by Pip Hare who herself was part of the winning 3 Peaks Yacht Race team in 2013, and racing in Nunatak a J120, which has competed in the race previously three times.  The teams' race will be followed by a camera crew for a documentary which will be broadcast on S4C and Channel 4 later in the year.
Team aparito will be raising money during their race for Elin's nominated charity Findacure a charity which works with patient groups to find and improve treatments to some of the world's rarest and most devastating diseases.