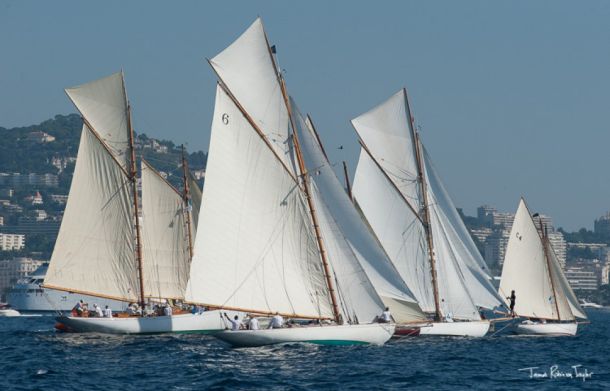 The 37th edition of the Régates Royales will be once again in the spotlight from September 21 to 27 with around fifty Dragons and nearly eighty classic yachts set to race in the gulf of La Napoule. A unique and magnificent gathering that marks the final event of the Panerai Classic Yacht circuit with the most stunning yachts from the past such as the huge Shamrock V and Eleonora, to the more recent winning racers such as Il Moro di Venezia and Helisara, then also the best Dragon crews from all over the world will be there too.

After the International Film Festival in May and the Yachting Festival, that has just come to a close, the French Riviera will be in the limelight again when the most beautiful and biggest classic yachts dating from 1892 like Marigold, to the more recent ones from the 1970s will assemble at the quai Laubeuf and race in the Bay of Cannes. The blue Mediterranean waters between the Esterel and the Lérins Islands will host, from Monday September 21 to Sunday 27, five days of close and exciting racing. The Régates Royales was first held here in 1929 to pay tribute to the King Christian X of Denmark and after a brief break, returned in 1979 to gather classic yachts, metric classes and one-design Dragons.

On fire
The Dragons would not miss Cannes for any reason, and this year they will be back in force with more than forty crews, with the crème de la crème of the class sailors. The Russian Anatoly Loginov, Finland's Christian Borenius, Germany’s Helmut Schimdt, British female skipper Gavia Wilkinson-Cox, Irish Martin Byrne will face the competitive French armada led by Marc Bouët. The rendezvous is a true end-of-the-season tradition for the class, after a full year on the Swedish, Italian, British, Dutch, French, German and Danish waters. The crews will have battle it out on a particularly technical racing area between the Bay of Cannes and the Juan Gulf.

Yet, it will be the Vieux Port, where the Régates Royales race village will be located, that will give the fans the chance to admire the majestic classic yachts that that have been part of the last two centuries rich maritime history. As a matter of fact, there will be more than ten centenarians with the likes of Marigold (Nicholson), Viola, Tuiga, Tern, Eva, Moonbeam of Fife and Moonbeam IV, Nan (Fife), Tigris (Mylne), Oriole (Herreshoff), Phoebus (Godinet), Bona Fide (Sibbick). Moored in the old harbour some of the best racers from the 1970s too, IOR one-offs like Helisara and Naïf (Carter), Stiren or Palynodie II (Stephens) the boat originally owned by Marseille's mayor Gaston Defferre, Oryx (Illingworth & Primrose) plus some of the legendary America's Cup challengers like the Australian flagged 12MI Kookaburra III or the Italian AC class Il Moro di Venezia, just to mention a few.

A tribute to Florence
This 37th edition of the Régates Royales will also have a very special flavour, not only because it's the closing event of the Panerai Classic Yachts circuit but also because it will pay a tribute to Florence Arthaud, a real aficionado of the regatta. On Thursday September 24, her memory will be honoured by French ocean racing sailor Catherine Chabaud who will look back on Arthaud's incredible sailing career spanning from her historical win at the Route du Rhum in 1991, her participation to the round-the-world race with Alain Gabbay, her transatlantic speed record, to the more recent successes in the Figaro and Class40 races and, obviously, her passion for classic yachting.

Elegance and prestige
To end the regatta in style, the Yacht Club de Cannes, one of the oldest in France being founded in 1859, will be presenting a special award for “Elegance and prestige”. The prize was created on an idea by the owner of Dorade, the beautiful yacht designed by Olin Stephens back in 1930, who donated the exclusive Trophy to the Yacht Club de Cannes. The most elegant yacht and crew will be judged by an experts' panel.