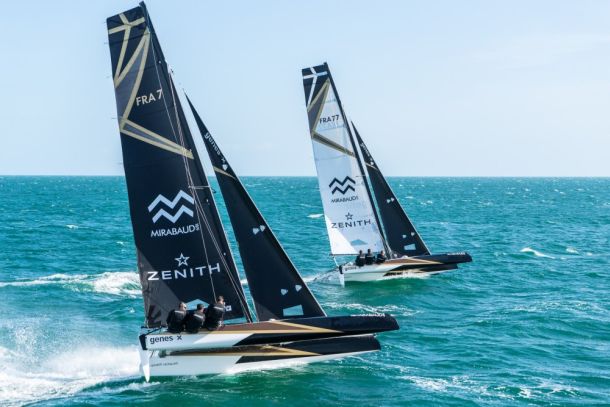 Small boats, huge show! This weekend, the new, 7.5 metre Diam 24 trimarans will hit the headlines as they compete in the Spi Ouest-France for the first time. The event promises well, not only because of the number of entries, but also because some of the best sailing teams will be participating. After three months of training, Spindrift racing’s sailors are entering their first competition of 2015. The importance is such that they are entering two boats: Spindrift Black and Spindrift White.

In their build-up to the Jules Verne Trophy attempt next winter, the team has decided to compete on three circuits this year: D35 on Lake Geneva, GC32 throughout Europe, and Diam 24 along the French coastline.

With two boats competing on equal terms in the Diam 24 class, a healthy internal rivalry will raise the level across the team, providing the intense preparation required for the Jules Verne Trophy. “Our aim is to ensure that training is continuous from one category to another,” explained Spindrift racing’s skipper Yann Guichard. “We want the sailors to spend as much time as possible together in a competitive environment. The Spi Ouest-France is a great way to kick off the new season. It’s our first competition of the year, so we’re not setting high expectations, but we’d like to put in some solid performances.”

Spindrift racing’s line-up for the Diam 24 competition includes small-multihull specialists Xavier Revil, François Morvan, Christophe Espagnon and Thierry Douillard, who have bags of ocean-racing experience and form the nucleus of the team. Joining them are two dinghy specialists: Tornado European Champion and Formula 18 World Champion Bernard Stamm, who competed in the Diam 24 class last season, as well as Tornado racer Gaël Ledoux, whose experience in racing “flying” boats for the Swiss-based Hydros team is a bonus for Spindrift racing.

This weekend in La Trinité-sur-Mer, Spindrift racing will pit themselves against teams led by Franck Cammas, Thomas Coville, Daniel Souben, Vincent Riou, Sébastien Rogues and Lionel Lemonchois. Most of the fleet will cross paths again at the other Diam 24 events before the Tour de France à la Voile in July. With all crews competing on exactly the same boat, teamwork and consistency will be the key to victory.

This winter, Spindrift racing trained with some of its future rivals. “The final few training sessions showed that the teams have vastly improved their ability to work with the boat,” said Spindrift racing’s Xavier Revil. “They are fluid with their manoeuvres and are becoming progressively more aggressive from the start. There’s an almighty scrap for the best positions across the start line. I think one of our main rivals will be Groupama, because of their experience in contact racing, and Sodebo, who have been working closely with us since January. We’ll also have to keep an eye on Prince de Bretagne and Combi West, who have had some powerful starts recently.”

SPINDRIFT RACING LINE-UP FOR THIS WEEKEND:

Saturday, April 4th
8am: Sign-in.
10.30am: One or several races, including a major race for round C, weather permitting.

Sunday, April 5th
8.30am: Sign-in.
11am: One or several races, including potentially a major race for round C, weather permitting (if the major race was not held the day before).