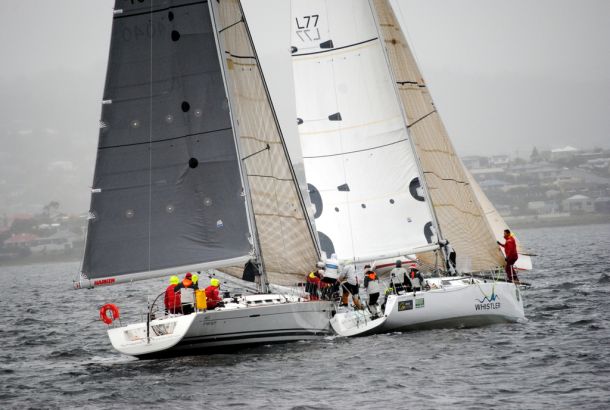 The Protagonist and Whistler (to windward) collided at the start of the Betsey Island Race. Photo Peter Campbell

Tasmania’s biggest and fastest ocean racing yacht, Alive, yesterday slashed the record for the 29 nautical Betsey Island Race in a brilliant display of power sailing from Hobart down the River Derwent, around the island in Storm Bay and return.

The Reichel/Pugh 66’s performance augers well for her tilt at the iconic 89 nautical mile Bruny Island Race next Saturday, which will be her final race in Tasmanian waters before returning to her base in Brisbane.

Owned by Derwent Sailing Squadron member Phillip Turner and skippered by Duncan Hine, Alive has remained in Hobart since finishing sixth in fleet in the 70th Rolex Sydney Hobart Race, then taking line honours in the King of the Derwent and competing in twilight and midweek social racing.

Although outsailing the fleet on a day more like winter that summer – 13º C at the 9.30am start, drizzling rain throughout the race and a chilling 18-20 knot southerly breeze, gusting to 25 knots with choppy seas – Alive could not match the local opposition on corrected times in either PHS or IRC categories.

The start saw skipper Hine wisely hold back from an aggressive fleet of Group A boats jostling as they came up at the start line off Castray Esplanade.

Doctor Who won the start but The Protagonist and Whistler had a crunching collision between their hulls, which saw Whistler’s portside lifelines damaged. The Protagonist appeared to accept the blame, taking penalty turns shortly after the start.

Despite giving the fleet a start of a minute or more, Alive powered through the fleet, hard on the wind, to overtake the entire fleet of 29 boats, including the earlier starting groups, by the time she had passed the John Garrow Light.

While most of the fleet had to make several tacks down the river, Alive was able to lay the Iron Pot on one board, fast two-sail reaching out into Storm Bat to Betsey Island and return.

She then enjoyed a high speed spinnaker run and reach back up the Derwent to finish the 29 nautical mile course in 2 hours 45 minutes and 38 seconds, 44 minutes and 22 seconds faster than the previous record set by Cougar II in 2012.

“We had 18 to 22 knots for most of the race and few squirts of 25 knots coming up the river,” Derwent Sailing Squadron sailing manager Mike Denney said after sailing his own boat Wild West to third place in the Group 1 AMS category. “One gust hit Cleopatra and was laid on her side for some time with her spinnaker in the water,” he added.

Under IRC scoring, first place on corrected time went to Doctor Who from Toby Richardson’s X&Y and Colin Denny’s The Protagonist. Alive placed six out of the seven boats racing under IRC.

Five races in the Combined Clubs Long Race Series have now been sailed with Don Calvert’s Castro 40 Intrigue heading both the AMS and IRC pointscores and Tas Paints leading the PHS pointscore in Group A, Stewart Geeves’ Young 88 leading both PHS and AMS pointscores in Group B and Tim Maddock’s Quebrada leading in Group C.

Tas Paints leads the Group A PHS scoreboard on 22 points, followed by Madness on 30 points and David Brett’s Illusion and The Protagonist both on 31 points.

In Group B, Footloose remains unbeaten under AMS scoring while under PHS scoring the Young 88 has 17 points, just one point ahead of Dave Willans’ Trouble with Malcolm Cooper’s Kaiulani on 24 points in third place overall.

Next Saturday morning will see the start of the iconic Bruny Island Race, the 89 nautical mile circumnavigation of the elongated island south of Hobart with Alive, Intrigue, Whistler, Tilt and The Protagonist among the early entries. The Bruny Island Race will start off the Royal Hobart Regatta Grounds, south of the Tasman Bridge at 9.30am