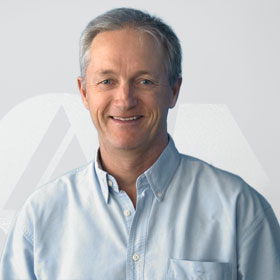 Alistair Murray has announced his retirement as Managing Director of Ronstan.

Last year, on April 1, an email circulated announcing the retirement of well-known sailing identity Alistair Murray from his long-held role as Managing Director of Ronstan. It turned out to be an April Fool's Day prank initiated by Scot West, head of Ronstan USA.

Now, in a delightful irony, the announcement has been made for real and Scot West is the man who will step into Alistair's enormous shoes. Alistair will remain connected with the company as Chairman of the Board.

Here's the official (this time) announcement of the changes:

Melbourne, Australia – Ronstan, the Australian based global player in sailboat hardware and architectural markets, is making a number of changes to top level management to set the company up for the next stage of its growth.

A full list of changes at Board level is attached with the most significant one being the promotion of Scot West who will take over from long time Managing Director, Alistair Murray.

Alistair is stepping down after 19 years in the role and will take over as Ronstan’s Chairman. He was quoted as saying, “I have spent a long time developing a magnificent team at Ronstan and I am thrilled to have the talent to choose from at all levels to take the company on to even greater success. Scot will do a great job.”

Scot has been in charge of Ronstan’s USA operation for 11 years during which time Ronstan has grown into a market leader. Reflecting Ronstan’s further internationalisation and enormous potential in the northern hemisphere he will be based at the Rhode Island, USA office.

Scot commented “I am thrilled to take over as Managing Director at Ronstan. Alistair has been a dynamic leader here for a long time and as a result we have had some great success. Now I am looking forward to getting some fresh eyes on our biggest challenges and opportunities. More than anything, I have worked with the other senior managers at Ronstan for over 10 years and they give me the confidence to know we can and will do great things at Ronstan.”

Ronstan is headquartered in Melbourne, Australia and is owned by its management team. The company has manufacturing facilities in Australia, Denmark and Indonesia and a global network of distributors, enjoying a high profile in the sailing and architectural markets in 45 countries world wide.

Timothy Melville, General Manager of Operations, will join the Board of Ronstan effective 1st February, 2016, becoming Operations Director. Timothy has been with the company for 22 years and as a Director will join Scot West, Alistair Murray, Graham Cunningham, Louis Sander and Laine McCooke on the Board.

Alistair has added his own unique perspective with an email under his long-time banner View from the Head:

No, it is not the 1st of April!  Most of you will remember that dastardly joke played on me last April, announcing that I was stepping down as Managing Director of Ronstan.  Well, here I am, less than a year later, and this time it’s for real … I am handing over the reins!

In thinking of how to announce it, and what to say, I actually went back to that 1st April “announcement” of last year and I’m not sure I can put it better myself!  I may even use some quotes (highlighted in yellow) from that very letter because that scoundrel actually did a great job announcing my “retirement”.

It’s now time to “out him”.  The perpetrator of that prank was Scot West, head of Ronstan USA.  Revenge is best served cold and I’m going to keep my powder dry until I exact the ultimate revenge when he least expects it, but I thought I would fire at least a parting shot by giving him all my responsibilities!  Yes, he, the man who publicly “retired” me, is taking over my job!

As everyone knows, my love of Ronstan runs deep and I’ve always been proud of what a young and vibrant company Ronstan is.  I am thrilled to be able to do what I have always aimed to do… promote from within.  Scot is a star and he has a fabulous group of people to support him!  I know too that he will have a challenging and rewarding experience leading Ronstan to our next level.

As you would expect after spending 40 years working at Ronstan and it having been my only “real job” this has been a gut wrenching decision, yet one where the timing somehow feels exactly right to me.  I have so much more I want to do with my life and quite frankly the demands of the long hours and total commitment of a job like this prevent me from getting to them.

On the non work front, in my future I see being the best father and grandfather (first one due April!) I can be, spending lots more time with my wife Tracey, more sailing and cycling, contributing to my yacht club, staying fit, charity work, adventures in far flung places (Antarctica this December), maybe learning music, maybe golf (maybe not!), reading the daily paper and more books and staying in contact with the fabulous people I have met around the world, such as you!

On the work front I look forward to providing Scot and the team with maximum value as Chairman of Ronstan, and to staying in touch with our customers and markets.  I have a goal of running the 14th International Sailing Summit in China, with the theme of “East Meets West”, as sailing has so much potential in Asia and we all have so much we can learn from each other.  I look forward to supporting and mentoring the younger Ronstan team and others who matter to me in the way that I have seen it done by the Ronstan Chairmen who have immediately preceded me, Michael Hanlon and Graham Cunningham.

I will have more to say and a lot more people to thank, when I retire from full time employment at the end of June, at which time I will be a 60-year-old, retired grandfather!

My friends it has been quite a ride and I am thrilled that we have done it together.

Among Alistair's many contributions to the sailing industry has been a series of Forums held at international events such as the America's Cup, where industry leaders gather to exchange ideas. As you can see from the above, those will continue despite the “retirement”.

We hope that Alistair will have more time to ride his bike and sail his Tasar, both of which activities give him great pleasure. On behalf of the sailing industry in Australia and around the world, we thank Alistair for his outstanding contribution.