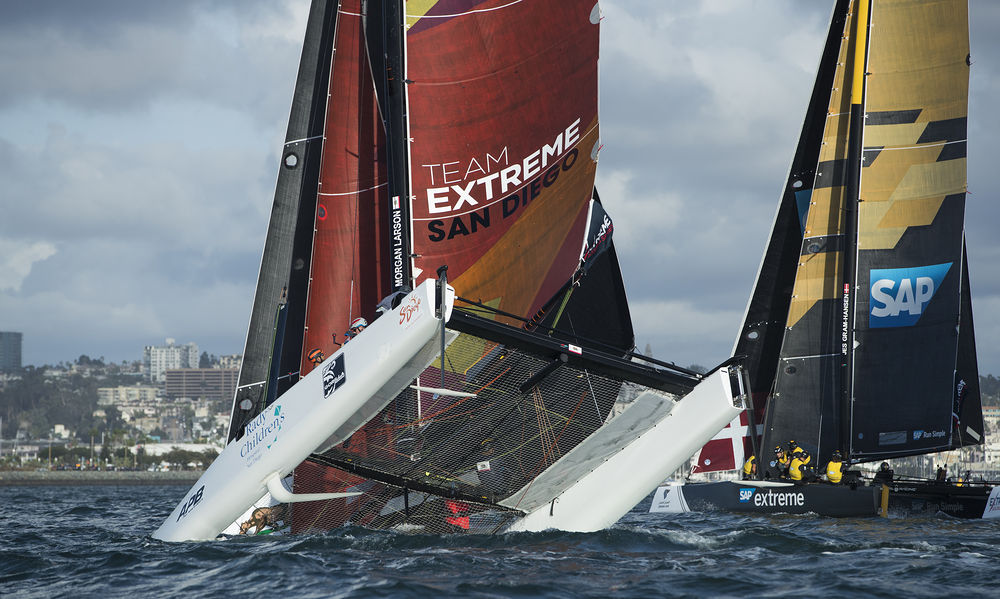 In a stellar performance from SAP Extreme Sailing Team, Alinghi's lead dwindled to just one point at the halfway stage of the seventh Act of the Extreme Sailing Series™ in San Diego.

The fleet took part in six spectacular races, treating the crowds to plenty of foiling action and hair-raising nosedives. A solid four bullets, a second and a third from the Danish-flagged entry saw it climb a spot to second.

“It was fantastic. There was a lot more breeze, which changed it all up from yesterday. It took us a race or so just to sharpen up, but from then on we had perfect manoeuvres the whole day and we managed to gain boat lengths in gybes,” Adam Minoprio, helm of SAP Extreme Sailing Team said.

“The final race was good; it's always great to have another boat to play with. It's been like that all day with various different boats and we're pleased to be up front fighting for the lead,” added the Kiwi helm, whose team hit the top speed of the Act so far with 28.8 knots, an insight provided by SAP Sailing Analytics.

Alinghi managed four podiums from the six races, including one win, which was enough for the Swiss syndicate to cling on to the overnight lead by a narrow margin.

Team Extreme San Diego skipper Morgan Larson, a former Series champion, gave the rest of the fleet a reminder of what he is capable of with an epic closing race. Tussling with Minoprio at the front of the fleet, the Californian stormed to a second-place finish to the delight of the crowds.

“The racing was second to none. We were disappointed with ourselves as we've struggled to get out of the bottom two for so long. We finally got some better starts and figured out some of the techniques with the gybing and then all of a sudden we were in the front three, and that's all it takes,” said Larson.

“This is a tremendous event and it's a great venue for it. When you come along the wall and hear everyone cheering for the local boat it's great to be on it,” added the Californian skipper, whose wildcard entry finished sixth.

Despite being the only one of the top five that has not yet won a race, Oman Air climbed a spot to finish on the podium. The Omani-flagged syndicate, one of the season frontrunners, came tantalisingly close to victory in race ten but was pipped to the post on the final leg by SAP Extreme Sailing Team.

In stark contrast to yesterday, Land Rover BAR Academy – helmed by Sir Ben Ainslie – struggled to break out of the bottom half of the fleet. One win was not enough for the Brits, who dropped two places to fourth, followed by Red Bull Sailing Team who climbed one spot to fifth.

Bad luck struck for NZ Extreme Sailing Team in the penultimate race when it snagged a buoy and went from the front of the pack to last. The squad finished second-to-last ahead of Lupe Tortilla Demetrio, the second US wildcard.