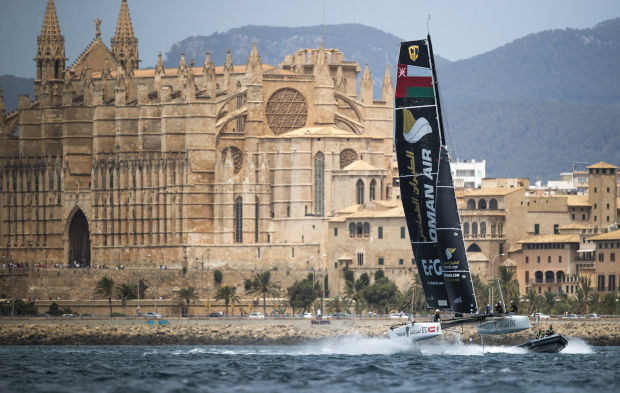 After a faltering start to day one of the 38 Copa del Rey MAPFRE, Alinghi turned on the afterburners to take the final two races of a full-on, five-heat afternoon in the latest round of the 2019 GC32 Racing Tour in Palma, Mallorca.

The recently crowned GC32 World Champions sit tied on points with Oman Air who won the first and third races of the day. The warm northeasterly breeze was blowing 15-18 knots straight off the shore of Palma, although there were some big gusts and wind shifts ready to catch the foiling catamaran crews unawares. There was no room for losing concentration.

“It was really gusty,” said Alinghi’s helmsman Arnaud Psarofaghis, ever mindful of the risks when things go wrong on a GC32. “We weren't thinking too much about capsizes, but it was certainly tricky out there. It was a really good day’s racing.

“We didn't sail the first three races really well, but then the last two were really good and we sailed clear of the pack, got some luck with the windshifts.”

Even when they started too early, a quick gybe around the pin end start mark and on to port tack behind the rest of the fleet soon shot the Swiss back into contention.

Aside from the double bullets notched up by Alinghi and Oman Air, Red Bull Sailing Team won the other race of the day. Double Olympic Champion Roman Hagara can see a noticeable improvement at the front of the fleet compared with a couple of years ago in this still young one design flying catamaran class. “The top boats are looking at every little detail for an advantage. A few years ago, a day like today would have been 'survival', but now, to win, it comes down to the little things. It’s proper racing, where you’re thinking about every wind shift and every gust.”

While Alinghi rounded the windward mark and unfurled their gennaker in the final race, Hagara kept their big sail rolled up on the furler and briefly surged ahead of their Swiss rival. “When we rounded we had a nice angle in a good puff, so we decided to keep the kite furled, and went 32 knots with two sails,” continued Hagara. “We were quicker without the kite, it was a good call. When you have a good shift and gust, you gain a lot in these boats.”

Erik Maris is the only non-professional steering his boat, yet Zoulou had her moment in the Spanish sun today as the French team seized the lead in race four. While Alinghi would eventually overhaul Zoulou, it was a great moment for the less practised team. Crewman Nico Heintz explained: “The two first races were a bit windy and we were a bit worried, but later the wind dropped a bit and we were a bit more comfortable to push the boat harder. We were fighting; each race we fight for the first place and see what happens.”

If it felt windy for Zoulou it must surely felt even more so for the crew of M&G Tressis Silicius, sailing together as a unit for the first time. Sure, their skipper is none other than Iker Martinez, Olympic Champion and veteran skipper of multiple Volvo Ocean Races. But working together with a new team is never easy on a boat as demanding as the GC32.

Daniel de la Pedraja Yllera recently won the J/80 World Championships, but today was his first experience racing at hair-raising speeds in excess of 30 knots. “We had some good moments today,” he said. “We have a lot to learn but we are learning quickly. A lot comes down to the timing between the different people and tomorrow, we’ll come back to it with a stronger feeling for our jobs on the boat.” The Spanish team won’t be surprised to find themselves at the bottom of the leaderboard, a few points back from Switzerland’s Black Star Sailing Team, but with the steepest learning curve of all the crews gathered in Palma.

Racing continues on Thursday with a start time of 1300 hours local time, and with moderate breeze on the forecast. It should be another sparkling day of GC32 competition in Palma.