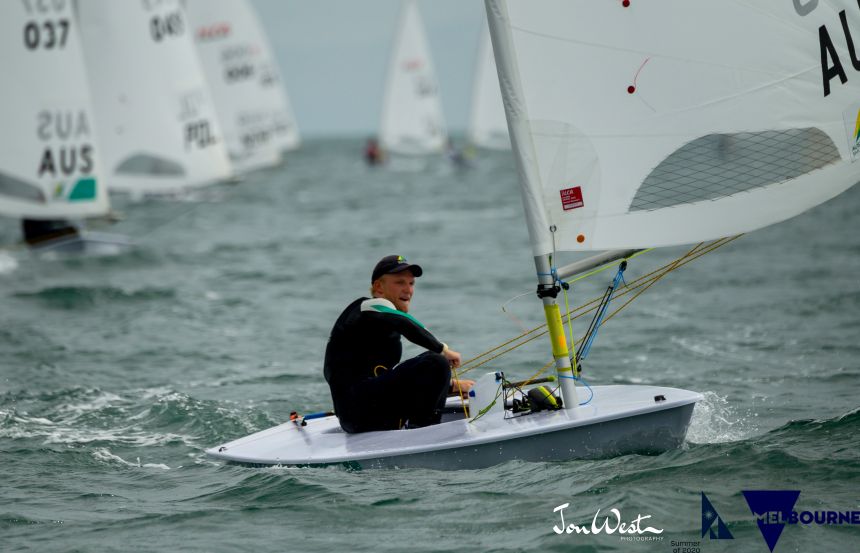 Finn Alexander (AUS) was the surprise co-leader at the Laser Standard Worlds on Day One. Photo Jon West Photography.

There is an Australian on top of the ILCA Laser Standard World Championship leader board, but it is not one of the pre-event favourites. Finn Alexander, ranked just 36th in the world, finished the day with a first and second place, to be tied with Rio Olympic silver medalist Tonci Stipanovic (CRO).

The first day started slowly, with all three fleets held onshore while the race committee waited for an almost non-existent westerly to back to the south-east and freshen. This it duly did, and the first race got underway at 3.30pm in 8-10 knots from the SSE.

By the time the second race started at around 5pm, the wind had freshened to 15 knots and was relatively steady from the south.

Alexander said that key to his success was “staying pretty relaxed and keeping it pretty simple”.

“I got two good starts (at the boat end) and then it was about playing the long shifts throughout the day. They were long tacks, so you just had to be patient.”

Stipanovic was also very philosophical about his excellent start, describing it as “one small step”.

He said the conditions were “really great” and in the second race, “I managed to pass two boats on the downwind, then picked up another place when Irishman Finn Lynch overstood the top mark.”

Ranked number one in the world, Australian Matt Wearn is in 10th overall, seven points from the lead.

“It was a pretty average day,” he said. “I made it look harder than it needed to be.”

He also felt he was hunted a bit, as the sail numbers being used have been issued in ranking order.

“People see the number one (on the sail) and want to take you out. In both races there were passing lanes, but I couldn’t find them.”

Defending champion Tom Burton (AUS) also had an average day by his standards, with a 7th and a 13th which leaves him tied for 29th overall.

“I sailed OK but the results don’t show it,” he said. “In the second race I was third around the top mark then got caught up in a big group going slow and couldn’t get myself out of it.”

Many of the sailors have more at stake than a medal at these Worlds. They are also competing for a place at the Tokyo Olympics. So far, the task for the New Zealand selectors has not become any easier. Rio bronze medalist Sam Meech is two points ahead of his close rival, Thomas Saunders.

However, at this early stage things are looking good for British sailor Elliott Hanson, who holds 8th place on 10 points, well ahead of former world champion and Rio Olympian Nick Thompson, who languishes in 44th, 19 points behind.

With two more days of qualifying, there is plenty of time for those who had a bad day to improve their placings. Tomorrow’s forecast is for stronger winds which could increase to just under 25 knots by Thursday.