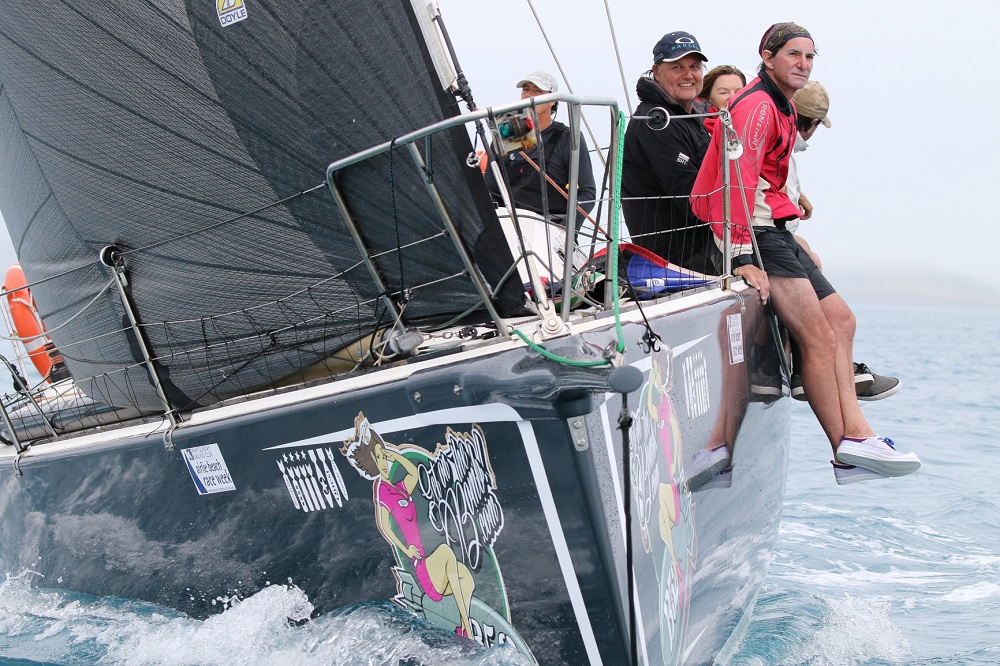 Happy campers on B52 - they found some breeze - Shirley Wodson pic

Leon Weaver left the race course yesterday thinking he had won the Trailable Yachts Race 3 to claim the overall division lead at Airlie Beach Race Week Whitsundays Festival of Sailing, however, in the blink of an eye things changed, and Weaver’s humour had to kick into gear.

Weaver’s boat is Jakal, a Highlander 25 which sails well in light air, and 6-8 knots was just the ticket for the Tasmanian crew. But you need to sail the correct course to win the race.

“We thought we’d won, but we had to retire because we went the wrong way coming across to Pioneer Point. Others did the same. We followed – and got pinged. To top it off, I went overboard during the race, rolled the ankle. The guys had to pull me back on board. I was trying to catch fish for dinner,” Weaver said.

“The boat’s nearly 60 years old and sails aren’t far behind that. Our helmsman has one eye, so I’m blaming him – I was busy organising snacks. Next time I’m bringing a sextant and a navigator.

“We also had to go around a whale – we thought it was a rock – until we got close and it moved. We had to go around it, but it did the right thing, it pointed us right at the mark,” Weaver ended.

Jakal’s misdemeanour cost the Tasmanians the lead. Bumped from the top spot to 10th for Race 3 has dropped her down the overall rankings to sixth overall, but she is still in with a chance. There are three days of racing left and Jakal is only five points off the lead.

Ian Vonk’s Thompson 780, Revival, is the new overall leader of the Trailable Yacht Division, while William Richards’ Masrm 720, Masmerised has lifted to second place. Third is Hairy McClary (Tim MCall) which was declared winner of Race 3 following the demise of Jakal.

In the Non-Spinnaker division, life was easier for Race 3 winner John Galloway, who skippered QMS, a Northshore 38 to a win. The quiet achiever professed to have little of interest to say, but admitted: “It was very long race because there was not a lot of wind.

“Awesome (Peter Harrison’s Fast 42) got close to us at one stage, but we were more up sailing with the spinnaker division in front of us. We didn’t think we sailed that well, but we won, so we must have!

“I think this is my 20th year at Airlie Beach Race Week. I enjoy it and I live here, which makes it an easy decision to take part. In fact I’m only five minutes from the marina,” he said.

QMS also won the opening race, so leads the division by one point from Awesome, another local boat. The pointscore is so close between the top four boats, it could go any way with three days of racing remaining.

Today is layday. Competitors return to the Whitsundays racetrack tomorrow morning for Day 4 of racing.