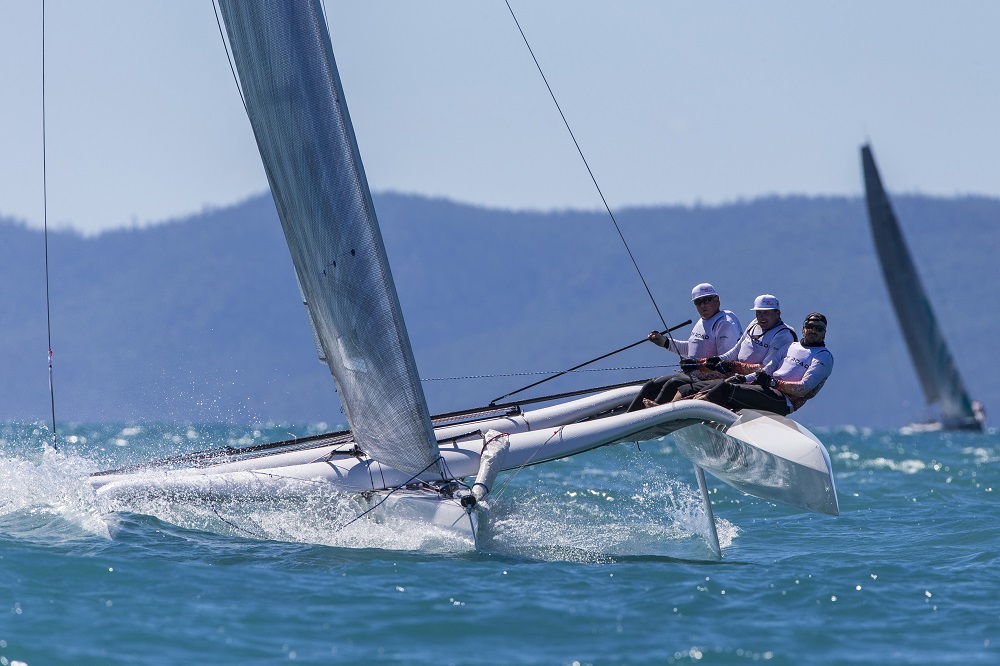 The sun came out in force, but the going was light on Day 4 of Airlie Beach Race Week Festival of Sailing hosted by Whitsunday Sailing Club, making it difficult for race officials to get racing away.

It wasn’t until after 1pm the nine divisions were away at five minute intervals, so a spot of whale watching was on the agenda as the 11am start time came and went.

Both races were carefully chosen to allow for shortening of courses should the light breeze evaporate, as was expected.

However, when a steady breeze with enough pressure failed to materialise, Thompson announced shortly after 1pm that all classes would join the Performance Division 1 boats for windward/leeward racing.

The Goat (NSW) has taken up residence at the top of the IRC Passage scoreboard. Ray ‘Hollywood’ Roberts is steering the Sydney 38 owned by Mitch Gordon.

“We got a good start at pin today. We were fine up the beat, but it was really hard downwind. The breeze was coming and going and we were concerned Ponyo (David Currie’s modified Farr 40) was getting away from us. We had a good next beat though and held our time,” Roberts said.

“The next downhill was close – it was touch and go all the way with Ponyo. At the third of last beat, Jamie Wilmot (tactician) called it well and got us into breeze the others missed. It’s tough competition though,” Roberts maintains.

With just two days of racing remaining and tomorrow looking iffy with next to no breeze forecast, The Goat will be hard to beat after scoring 1-3-1-1 results. She is three points clear of nearest rival Ponyo and nine clear of third placed Swish (Steven Proud).

The Goat has a stellar crew including of course Wilmot and navigator Jeremy Whitty, a recently retired Qantas captain and reputable yachtsman.

“The first day we had really good pressure going to Double Cones after getting off to our best start. We got around Cones in good clean air. We went to a Code Zero when others went to spinnakers and held our line in pressure all the way to the Cones. We sailed smart and were happy with our result,” Roberts said.

We were third in next race we went to White Rock, I thought we were sailing reasonably well, but the lighter and longer boats were better downwind – and we made few mistakes.

“We sailed quite well the next day, but with negative tide, round the back of South Molle, we shaved a reef close to the Island. It wasn’t till will saw white water that we thought we’d better tack.

“All in all, it’s been close racing – tricky with current and light air. Jeremy Whitty – his job is to keep us close to the rocks, but not on them. When you have a metre under you, it doesn’t look good.

“We’ve got local knowledge on board too. Dale Johnston is our local eyes. When Jeremy says ‘we can go through there’, Dale sometimes says ‘sh**t, I wouldn’t’.

Performance Racing Division 2 is set to come down to the wire. While Craig Humphries/Todd Huggonson’s Conquistador continues to lead, three points behind, Gary Smith/Jeremy Rae’s Vivace and Andrew ‘Yorky’ York’s REO Speedwagon are on equal points.

“It’s a great regatta – a great place to sail and they’re doing a good job with our handicaps,” said Yorky, who has guns Mick O’Brien and Doug McGain crewing for him.

“We held off the Fareast today (WhereswalII) to finish second, so we’re on equal points with second place.”

On their uncharacteristic eighth in Race 4 yesterday, York explained: “We won the previous race in breeze and they hit our handicap hard, then we went into the next race in light air and eighth it was.”