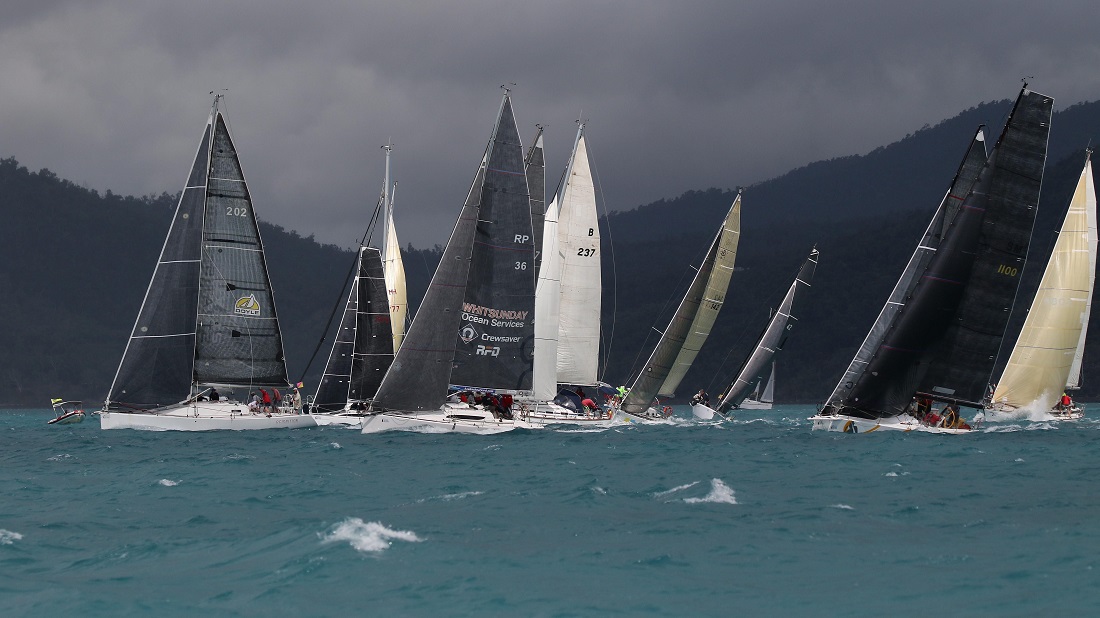 Another day of ideal sailing at Airlie Beach Race Week with a race course weaving through the beautiful Whitsunday Islands and an ideal 15- 20 knot wind, but fun seems to be the focal point for most competitors who are enjoying the freedom they realise they are fortunate to have.

Organisers set a course that took the various divisions around the Molles and Denman Islands. What better way to spend a Saturday?

Racing between the thrilling Extreme 40s in the Multihull Racing was close. Back in Black (Jamie Jochheim) was leading, until she came unstuck when her main split heading from Bluff Point to the finish. She slipped from first to third and the Paul Mitchell skippered Angus took advantage and went on to win.

Mitchell, a dangerous opponent in multihulls, leaving nothing to chance and has the trophies to prove it.

In Performance Cruising Division 1, Richard Fader bounced back from last place on his Hanse 540E One O Nine yesterday, to first place today.

“We weren’t quite with it yesterday,” the Tasmanian commented, laughing. “Today was very pleasant and enjoyable. I like doing the hard yards first – going upwind and then having a nice run home – that works nicely for us.”

“We are Tassies, so it’s great to be up here. There are eight of us and a couple of locals. It was pretty good going around North Molle and Denman Islands. Two days of great wind, but a bit more sun would be nice,” he said after purposely leaving the cold behind.

Tassies are leading the charge in Performance Cruising Division 2 too. Brett Cooper scored a second place yesterday and backed up with a win today with his and wife Jacinta’s Melges 32, Crusader Clennett’s Mitre 10.

“The weather has been tailor made for the Melges,” Cooper admitted. The beat from the start suited to us, as was the reach to Pioneer Rock. We stayed in touch with the guys we had to beat, and then on the passage to the Molles, we hung in with them.

“We put the big A5 kite up and the breeze had moderated a bit, so that was perfect. We hedged a little and think we have more in the bag to offer. Twirler (Darren Jones) is arriving tomorrow and will do the rest of the week with us. He may re-cut our new sails when he’s had a look.”

The Tasmanian sailor says they are lucky to have any sails at all. “One set was in Townsville, another in Brisbane and the battens were in Sydney.”

What he and Jacinta also have is a star crew that includes Jones, a world champion one-design sailor; Stacey Jackson, a Volvo Ocean Racer and skipper of the all-women Wild Oats X boat that finished second overall in 2018 Sydney Hobart; Tassie offshore sailors of note, Luke Watkins and Sam Tiedemann and gun foredeckie, Ben Archer.

“We couldn’t do without him. Were very fortunate to have so many good people on board.”

This is a strong team that will be hard to overcome. However, Rob Davis and his Treasure VIII crew will not relinquish so easily. ‘The locals’ won yesterday’s opener and a third today has kept the Reichel/Pugh 36 in touch in second place overall.

“We made fewer mistakes today and broke less gear, that made the difference,” Holroyd explained. “We still had enjoyed yesterday anyway. We didn’t come here to win, necessarily, we came to have a good time.

Holroyd hails from Cawarral, between Rockhampton and the Capricorn Coast; “We cruised our boat up here. It took seven days and it was lovely,” he said.

The Trailable Yachts division overall leader is Situation Normal, with two wins from two races. Jamie Berndt, owner of the Shaw 650, is in the same frame of mind as Holroyd. “I’m not really here for the handicap. Two wins are nice, but for me it’s about sailing the boat the best we can and having fun.”

Berndt does not drive his boat. “I own the boat, but my father, Barry, skippers it.” Do they get on? “We have our moments – but don’t we all,” he says laughing.

“We’re doing all right. Having Graham Sherring from Evolution Sails Gold Coast aboard is helping. We smuggled him up as crew member because we’re using his sails.”

The Queensland sees Leon Thomas and his Sayer 7, Guilty Pleasures 8 as their main competition. “Unfortunately we both had a capsize today – side by side – around the southern point of North Molle. It was like synchronised diving,” he said. “Sadly, the Go Pro went over the side, otherwise I’d share the moment.

“We recovered quickly and had lovely run going across the Bay doing 19 knots downwind. It’s been a good couple of days so far.”

Sea turtles experienced a ringside seat to the action, at home on the choppy sea, and unperturbed by the speed of the boats in the big breeze.

Racing at Airlie Beach Race Week Festival of Sailing continues tomorrow from 11am.