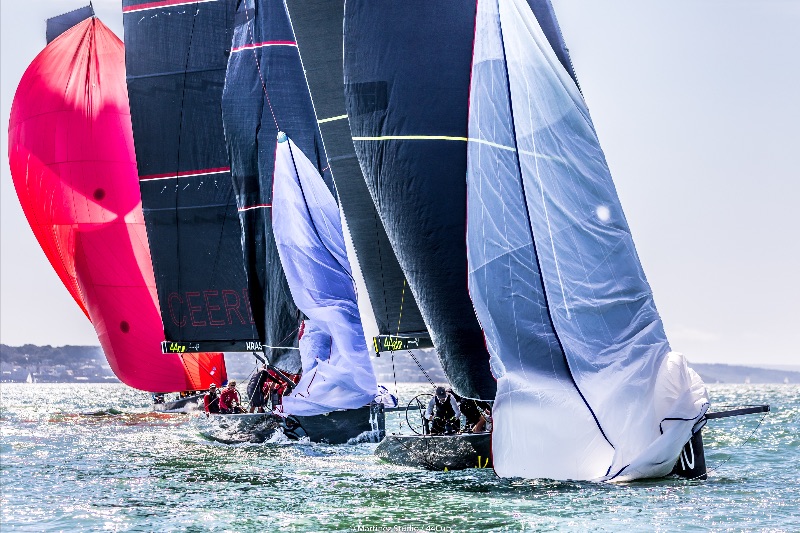 Getting the kite up quickly is crucial - Martinez Studio pic

Practice or showcase, call it what you will, the 44Cup fleet simply call it another opportunity to line up against each other – and while starting off the Royal Yacht Squadron to canon fire is always special, so too is the opportunity to push your opponents hard as you work your way west along the famous Cowes Green.

So, while the race from the Squadron to the starting area counted for no points, the short beat and long run provided a valuable opportunity for all to lock in numbers and techniques for the day.

This was also a day that saw summer return. A 10knot breeze, flat seas and largely flat water made for a very different race course from 24 hours before. But with more south in the wind direction for the opening race the breeze was spilling over the Isle of Wight making life tricky at the top mark.

Then, as is always the case in the Solent, there was the tide to contend with. Today, racing took place on either side of high water ensuring that nothing could be taken for granted as the current direction switched from flood to ebb.

So, while on the face of it the day looked straightforward, it was anything but, as the scoreboard confirmed. Three races, three different winners and by the end of the penultimate day, three teams on equal points all fighting for third.

It’s commonly said in the fleet that this a class that anyone can win and lose – today was that day. John Bassadone’s Peninsula Racing team were the first to enjoy success having read the conditions up the first leg perfectly. From there, they never looked back.

“In this class when you get a little bit ahead things do become easier,” he said. “You can tack when you want to and choose your own route.”

But, as is typical in this hotly contested fleet, you’re only as good as your last result and a shocker is always lurking around the corner.

“The second and third races didn’t go so well,” he continued, “and I’d like to think that those two sevenths aren’t ours, but unfortunately they are.”

His tactician Ed Baird was blunter. “John was having a good day and I wrecked it for him!”

The next race reinforced how fortunes can swing both ways in this fleet when you least expect as Artemis went from last in the first race to first in the next, but when the team least expected it.

“We broke our port runner block in the first race and were debating whether we should start the second race,” said Torbjorn Tornqvist. “We managed to make a repair, but we couldn’t load it up fully which costs us about 0.3knts of speed.”

But having stretched out a good lead on the good tack they had distance in hand to deliver their second win of the series.

By the final race of the day the tide had switched to ebb delivering a new scenario to consider. Against all the evidence of the rest of the fleet scrapping for the left, Pavel Kuznetsov’s Atom Tavatuy set their heart on the right-hand side of the first beat.

Untroubled by anyone else, they scorched across the start line at the committee boat end, tacked, banged the corner and came out on top at the windward mark. From there, no one got close to challenging their lead.

Their strong performance had launched them into third place overall, sharing the position with team Aqua and Charisma. So, what was their strategy from here?

“This a very strong fleet and it’s impossible to plan your path to the podium because everything can hang on the last race,” said tactician Evgeny Neugodnikov. “Our strategy will be to sail for ourselves. It’s great that we have two bullets. We now know that when we are winning, we are quiet on the boat, it’s much better, we like it.”

Three race winners evened things up on the dock too.

“One of the great things in the 44 fleet is that each race winner gets a bottle of champagne,” said Artemis racing tactician Iain Percy. “So, during the course of an event everyone gets a swig.”

Race 7 – 10 knots – south/south-west – flood tide
To provide the fleet with deeper water to sail in, the start area was moved further east towards Gilkicker Point. With the south/south-westerly breeze, the course axis was across the tide and towards the Isle of Wight where the breeze was shiftier, all of which gave the tacticians plenty to work with.

And while there were plenty of ladders on the race course, there were also some snakes.

From the start, John Bassadone’s Peninsula Racing was one of the few boats to take the right-hand side of the first beat where the tide got under their bow and helped to sweep them up to the first mark. Conversely the bulk of the fleet that had gone left ended up over standing the first mark leaving Peninsula to round in the lead.

After that, despite some private battles in the fleet, nothing challenged Bassadone’s early lead, and his team went on to take the win. Pavel Kuznetsov’s Atom Tavatuy took a well-earned second with Ceeref delivering a third.

The race kicked off with another even start as the fleet hit the line as one. With the tide now virtually slack and the breeze steady in strength, conditions were also even, at least that’s how it looked. In reality there were still shifts and puffs to play with and while this didn’t result in a festival of tacks up the beat, changing gear was critical.

Here, it was Artemis that came out on top at the weather mark. Despite damaging their port running backstay blocks in the previous race preventing them from getting full rig tension, they managed to keep sufficient pace on the good tack to see them take the lead.

With space to go where they wanted, they developed their advantage into a win come the finish.

But as an example, as to how quickly you can slip from the front to the back in this fleet, Peninsula Racing and Atom Tavatuy found themselves in 7th and 8th respectively.

Race 9 – 10 knots – flood tide
Knowing which side of the course you want and executing a plan to get it is the perfect way to start any race as Atom Tavatuy demonstrated in the final race of the day.

While the wind had remained largely the same, the tide had now turned and was starting to head out to the west. It was early days but the hint of more favoured current along with the additional apparent wind that it promised was enough for Kuznetsov’s team to make this their plan.

Ignoring the fact that the bulk of the fleet was fighting for the pin end and heading out to the left must have been hard, but the team held its nerve and was rewarded with the lead come the windward mark. From here they could sail their own race, go where they wanted and extend their lead while the chasing pack fought things out among themselves.

After two laps it was clear once again just how tight the scrap had been as the bulk of the fleet crossed the finish in a matter of seconds.