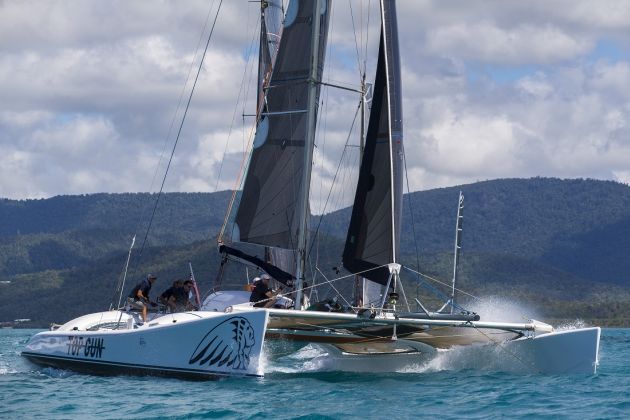 Online entry is open and the Notice of Race online for  Whitsunday Sailing Club’s 2017 Airlie Beach Race Week Festival of Sailing to be held from 10 to 17 August in the beautiful Whitsundays.

No sooner had WSC opened entries on the official race website, than Darren Drew had entered Top Gun, his Crowther 50 catamaran from NSW.

“First to enter, first to start and first to finish – I’m setting the bar high,” Drew said. “I like dealing with stuff straight away, I’m not a last minute person,” he said, adding that Top Gun would celebrate her 30th birthday on April 27, “the same day as my wife’s birthday.”

The Sydney sailor said he wanted to see all of Australia’s best multihulls at the event.

“Get those entries in, I want to sail against the best multi competition I can. I’ve got new sails and new foils.”

If that isn’t enough enticement, Drew added: “Airlie Beach Race Week provides the best sailing of anyone in the Whitsundays and it’s got the best courses because of the long reaching and running legs. Just give me enough breeze,” Drew said.

Last year, a record 131 boats from as far-afield as Asia and New Zealand raced, with some competitors flying in from Europe.

Festival of Sailing organisers are hoping to capitalise on last year’s high number when competitors enjoyed one of the best weeks of sailing anywhere in Australia, courtesy of ideal conditions and a fun social program.

As multihull skipper George Owen (Mad Max) said at the 2016 prize giving: “We love coming to this regatta – it’s a great race track, one of the best, from start to finish. The racing is really well presented, as the race management team does a great job.

“Our bowman, Dave ‘Hollywood’ Whitcroft, comes all the way from the USA every year just for Airlie Beach Race Week,” Owen commented.

A worthy endorsement for a great event that caters to all types of boats from the multihulls to IRC Racing, Cruising and Sports Boats.

Airlie Beach Race Week Festival of Sailing is again proudly supported by Tourism and Events Queensland and promoted as part of the It’s Live! Events calendar, following on from the event being awarded ‘Significant Event’ status in 2016.

The annual event has habitually attracted entries from Australia wide and beyond and from as far afield as Hong Kong and New Zealand.

As regular early entrant John Clinton (Holy Cow!) commented last year: “Sailors come from all over the place, and many we see only once a year. We love catching up with them all. We also have the greatest respect for the Whitsunday Sailing Club and what it’s trying to do for all of us – and they are very friendly, so it’s a pleasure to go back.

“And where else can you see so many whales and dolphins showing off so close up? Then there’s all the islands in the Whitsundays, many are uninhabited. You get to see all of this while racing and in between. There’s nothing like it,” Clinton ended.

Organisers urge prospective competitors to book their marina berths as quickly as possible to avoid disappointment. For entry and Notice of Race, go to: www.abrw.com.au/sailing/entries

A variety of Airlie Beach Race Week sponsorship packages are on offer now, including that of a Naming Rights Partner. For further information, or to discuss options, please contact Marketing Director, Adrian Bram via email: adrian@whitsunday.net.au or phone him: 0418 385 181.