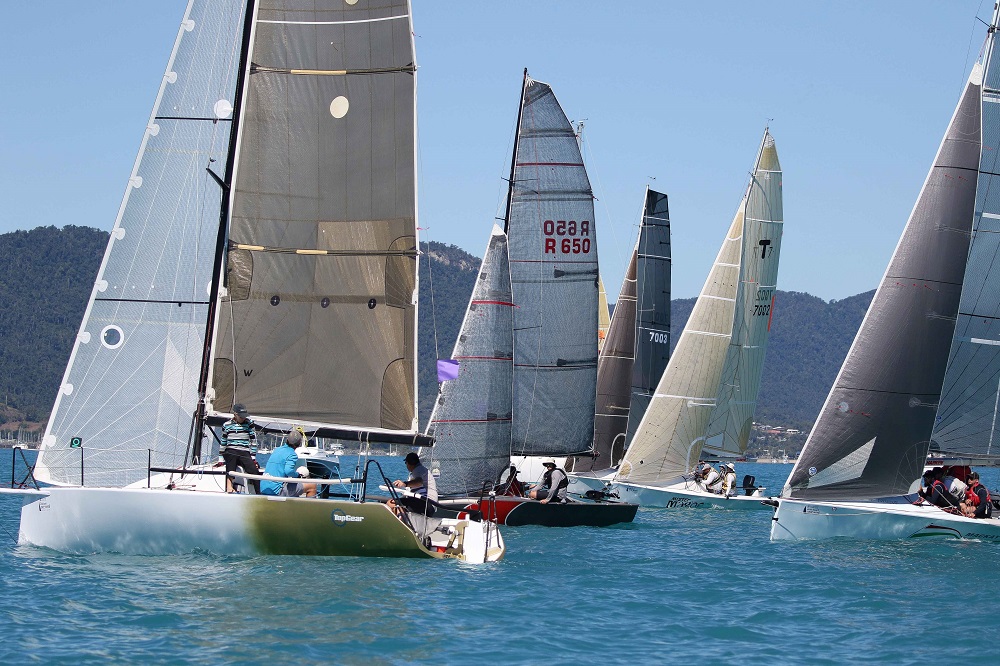 A long wait ashore for 64 crews as officials continued to monitor the weather, or lack thereof on the Pioneer Bay course, for the penultimate day of Airlie Beach Race Week Whitsundays Festival of Sailing, hosted by Whitsunday Sailing Club (WSC).

But it was worth the wait for some. Just ask Graham Sherring in the Passage Rating division and Terry Archer in Multihull Racing.

Sherring’s Desperado stole a march on the star of the show, Hollywood Boulevard (Ray Roberts). The Queenslander and his crew are the only ones to defeat the Sydney-based Botin 40 so far. And Desperado is a small compared to the rest of the flee; she is an Atkinson 24.

I asked him what special magic does Desperado have that the others lack?

“I’ve got Caedric Reader aboard – he usually sails with Uncle Ray,” was the quick response.

“The truth is we had a short Bay Race, shorter than usual, as we started late, just after 1pm, as there had been no settled breeze up to that point. We raced in 6 knots and it was light all day, with a lot of big holes in the course. And we had our moments with them… Nobody missed out.

“It was a pretty quiet, boring day, because it was so light. But the crew well for me today. We had a good start and good first hour of the race. We plodded along from there,

Sherring continued, “My boat is JOG (Junior Offshore Group) boat. It won three JOG titles during the eighties. JOG races have started up in Gosford and we won the JOG Nationals there in February.”

On beating ‘Hollywood’ Roberts by four minutes on corrected time, he said, “We’re elated. We’re on top of the world beating Uncle Ray,”

Hollywood still has a stranglehold on the Rating Passage series having won four out of five races. He holds a commanding 11 point lead over David Currie’s Ponyo from Victoria.

In Multihull Racing, Terry Archer has been taking on the big guns – ORMA 60 and Back in Black, the Extreme 40 – with his little 8 metre Grainger 075. I asked him yesterday what he had to do to beat either one. The response: “Get them drunk.”

However, Archer didn’t need to fill them up with turps; he beat them fair and square on the Bay course today.

“We sailed pretty well. Conditions were fairly good for us. We’re pretty chuffed. I was surprised we sailed past the ORMA guys on handicap. They called out and said “You got us by two minutes – they knew – we didn’t.

“I couldn’t be happier. We went past the finish line with a lap to go, when they were finishing, but at least they didn’t lap us!”

Archer continued, “Earlier on, we tried to stop Ross (Chisholm, the Race Director) going down to the start boat and thought, ‘surely he’s not going to send us out there at this late stage’.

“We’d been sitting around on the grass relaxing and had lost the urge. But he actually did a great job getting a race in for us – and we’re happy he did.”

Archer, who represents the host club, WSC, said that given the boat was a rotting hulk four years ago, before he rescued it, “t I think I should sell it today, It will never be worth more than it is now.”  This in reference to having slayed the two giants of the event.

“That’s where the name G’Nome came from, because it was like a garden gnome rotting in a back yard,” he ended.

The AP flags helm firm at WSC and the Coral Sea Marina Resort (where many of the boats are staying) before finally being lowered at 12.10pm. Race Director, Ross Chisholm, announced racing “would not start before 1pm.” Initially, racing was due to start from 10.30am, but there was little breeze.

Many of the smaller boats were still on the course at 5.30pm, a long day for them.