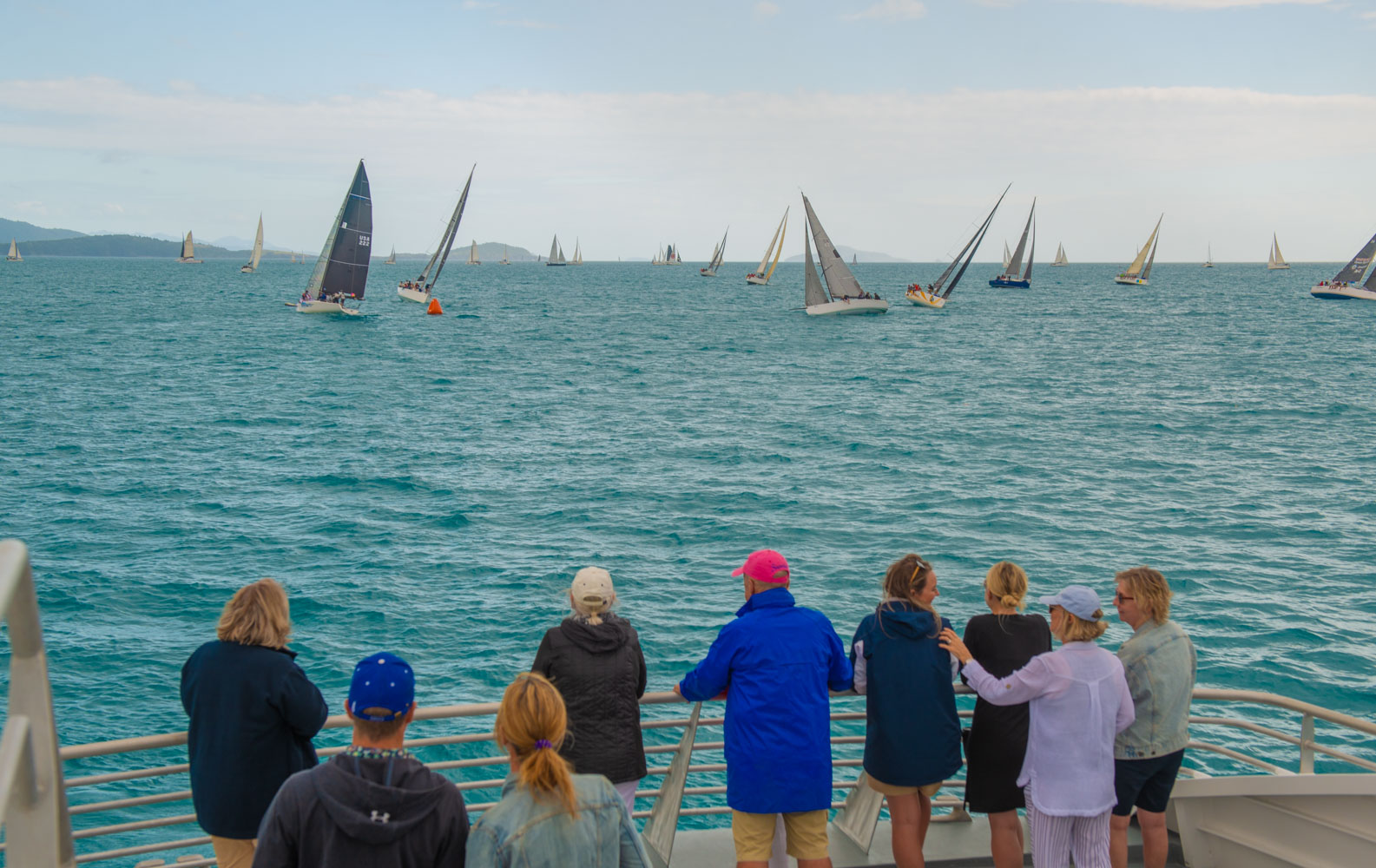 The Whitsunday Sailing Club’s Airlie Beach Race Week finished on a high note, with 10-17 knot winds for the final race on a triangle course on Pioneer Bay deciding the day’s victors and the overall winners in the various divisions.

The Paul Mitchell skippered Angus won the final race to clearly win Multihull Racing Division 1. The local sailor sailed one of three Extreme 40’s this week and came away with eight wins from 10 races. Back in Black (Jamie Jochheim) was second and Parabellum (Joel Berg) third. Their racing was always close and mainly came down to seconds between them.

Mark Gerard’s Storm Bay started the week with a win and at the end of the week remained on top of the scoreboard to win the Multihull Passage Series from Jeff Dodd’s Zero. About Time (or the Vegie Patch, as Jono and Gemma Winterbottom’s multihull from Pittwater in Sydney has come to be  known for its herb garden at the stern), won the final race.

“We did a triangle and a couple of sausages in 15-18 knots – perfect for us,” Fader explained. “It was a bit wet and grey, but who cares? We didn’t know what other boats we’d be sailing against here, but we are quick and had good crew, including a couple of locals.

“We’ll definitely be back. It’s a fantastic event, a great yacht club that really make you welcome, and great town. We are so lucky we were able to do it. We feel exceptionally fortunate. We will have a holiday up this way and then go home,” Fader said.

Division 2 went to the well-sailed Tasmanian Melges 32, Crusader Clennett’s Mitre 10, owned by Brett and Jacinta Cooper. However, the win was on countback to John Cray with Sea Bass, his third place today guaranteeing equal points for second place.

Ian Griffiths Witchy Woman won the final race though: “One of those days when everything went right. We went the right way, had the right sails up and the crew did a good job. We’re all pretty old – we’re all around 70 – and we only do one practice a year,” Griffiths said.

“We’ve been sailing for years in Hobarts and other races, but we don’t do any practice. We’re just old mates and it was lovely to go out on a win. We’ll just have to get our act together for next year,” said the Sunshine Coast yachtie.

With a drop in play, Keith Falkenhagen came out on top in Division 2 with his Beneteau Oceanis 461, Blue Moon. Kindred Sprit (Richard Holroyd) took second and Jubilation (James Jarvis) was third. Any of the three could have won, today decided.

However, Philip Bennett’s She scored her best result of the regatta with a win.  “We missed the first three days because we were in lockdown. On Wednesday we hit our straps and came third. Today we had our rig and sails balanced and were able to point higher than the rest, so we finally got it all together today and won,” the Queenslander said.

“We consider it a big plus just getting here and then to have two great results. It was very good regatta.”

The Trailable Yachts division went to Tim McCally’s Hairy McClary by one point from Renee Cordingley’s Sonata 26, Bella Amore, the latter taking out the final race.

“The conditions and race course were favoured to us today. We broke our mainsheet traveller – it  got jammed. We had to use the backstay on one tack to keep the main working properly. We’re stoked to win the race and to finish second overall,” Cordingley said.

“It was close racing all week, it was good. This is our first regatta with our boat. We really bought it to sail with the kids and here we are racing. The crew said we have to come back, they had such a good time,” she said of her mainly female crew and husband, Robert.

Local sailor, Peter Harrison, scored second place in the final race to clean up the Non-Spinnaker division with his Fast 42, Awesome. As I wrote in a release earlier in the week, Harrison is a slow burner who works his way to the top during the week-long Airlie Beach Race Week. A long-term supporter, he finished third last year, but this time out-did himself winning the division by eight points to another local, Vincent Wise’s Celebrity.

Andy Duffield (Wee Tri) won the inaugural WETA division by seven points, too good for the rest, but David Vockler (Hard Decision) had the last laugh, winning the final race to place second overall. The little 4.4 metre off-the-beach tris were a big hit at Airlie Beach, as were their owners.

“Today’s race ends another Airlie Beach Race Week. It’s been an outstanding success from all sides,” said Event Chairman, Ross Chisholm. “We’re praying that life returns to some sort of normalcy next year and that those who missed out in 2020 and 2021 can join in again.

“I take this opportunity to thank all our sponsors, competitors and the media for supporting our annual event each and every year,” Chisholm ended.