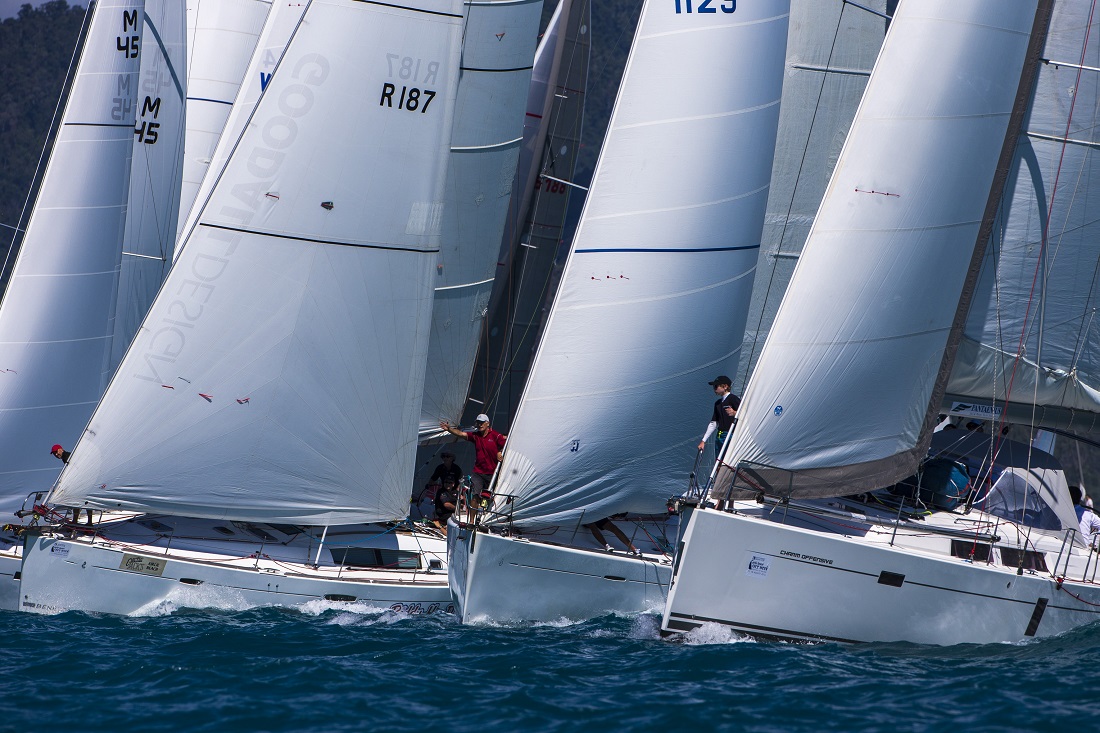 The weather could not have been better for yesterday’s opening day of Whitsunday Sailing Club’s 2016 Airlie Beach Race Week – or so we thought – but today‘s trade winds were enjoyed by the record 131 entries sailing across 10 divisions.

All divisions, barring IRC Racing and Multihull Racing divisions (which completed two windward/leeward races on the bay), enjoyed a race taking in some of the spectacular islands sprinkled around the tropical Whitsundays.

Beau Geste skipper, Gavin Brady said this afternoon racing was more exciting than it looked on paper. “It was really close. We raced Alive around the track both races. They got us on line in one and we got them on line in the other.

“It was a good day for us – flat and shifty. Perfect, and all is working well. It’s a great build up to the Australian IRC Championship,” the New Zealander said. “Next week’s expected bigger conditions could make things interesting.”

Roberts was in great form this afternoon, more intent on talking about his mad dash to Boats Camping and Fishing, “To buy two sleeping bags because two of my crew were cold last night, and we can’t have that.

“Now I’m at Woolies buying food to keep the boys happy. They’re lazy so and so’s. It’s tough being an owner AND the boat nanny,” Roberts said, unaware his crew were enjoying themselves at the Whitsunday Sailing Club celebrations while he toiled.

On the racing, ‘Hollywood’ Roberts conceded: “It’s been very exciting and close, especially between us, Ponyo, Mr Kite and Carbon Credits today. The first beat is always a challenge, because you have to sail close to shore, which is shifty, so you have to play those and have a bit of luck.

“You have to try to stay close to shore to stay out of the tide, get to the next headland, to turn the corner and run home. When you look at the finish times, it’s a testament to how good the IRC rating system is. You only have to cough and you lose two places,” Roberts ended.

Jones said he was thrilled with their win, “Especially after yesterday’s debacle with broken halyards and other bits. We hoisted our new crew member, Christine, up the mast in the bosun’s chair and she fixed it for us,” he said.

“Today we were amongst a big group at the front and stuck with the bigger boats and hung on, which was a benefit to us. We lost them a bit on the run, but picked them up again on the work home,” Jones finished.

And while most were having a ball on the race course, it was not so for Sports Boat entrant Shorty, owned by Queensland’s Jack Sherring, who is also a dab Moth sailor. The Egan 6 dropped her mast during the race, but all crew are fine.

Meanwhile, Frank, Simon Hull’s much touted ex-Vodafone from New Zealand, picked up a pair of third places to move up the leaderboard to challenge APC Mad Max and Malice. Along with Tony Longhurst’s Extreme 40, The Boat Works, Frank is causing a lot of interest here at the Tropical Festival of Sailing.