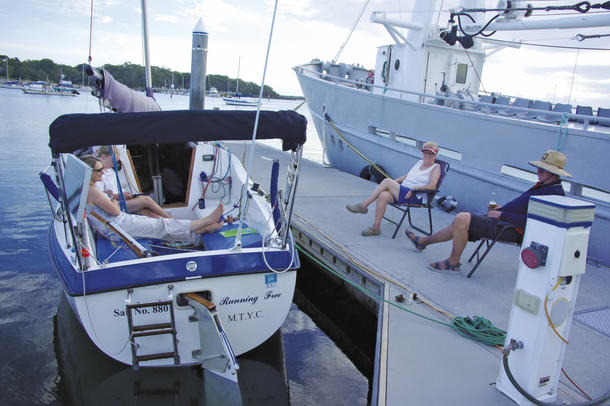 So the long awaited boating trip to Port Stephens has been and gone. We, being Caitlin and Ella (15 and 12 years old respectively), believe that everyone who came with us is all a bit wiser for it.

Our family travelled up the long road to Port Stephens and the Myall Lakes from Melbourne with absolutely no expectations of the place. No idea whether it would be like the Gippsland Lakes (a common cruising ground of ours) or Port Phillip (our common racing venue).

Only Len Hatfield, Dad’s friend and Ultimate 18 sailor of Laros could provide any meaningful photos and impressions of what we were in for.

Day one and two were spent sitting in the car with our Noelex 25 Running Free trailing behind us watching movies, reading books and listening to John Legend and Taylor Swift.

We, including Mum and Dad now, spent the night in a cabin at Yass before continuing up to Soldiers Point boat ramp where we met Papa and Grandma in their Whittley.

Around two hours later, the mast was up, boom connected and both boats were in the water before ambling to Soldiers Point Marina. Dad filled the water tank and we tied the boats up in their pens. It was not before long when Ella and I jumped into the water because it was so hot!

We remained at the marina again on day three just to get into the holiday mode and besides Dad was exhausted from all the driving.

So we fished, swam and paddle-boarded until lunchtime. That afternoon, still with the humidity in the air, we all trudged up to the local supermarket to get supplies for the four days that we were going to spend around Port Stephens. The next day we were moving to Shoal Bay, or so we thought!

Of course, we woke up to day four in teeming rain and decided that instead of spending four days exploring the ports of Port Stephens, we would head straight up into the Myall Lakes. Therefore, it was back to the shops to stock up
on more tins of corn and packets of pasta.

It was day five already and we got packed up and started heading up the river into the Myall Lakes. We got a little bit sunburnt, but the biggest dilemma was found by Mum as we were having lunch. The fridge wasn’t cold! Could this have been the end of our trip!?!

No, it was not. We stopped at Engels Landing for the night and Dad got out his trusty toolbox and fixed the fridge (which was a corroded wire).

Once it got dark we went prawning. Even with our horrific technique we managed to score six prawns, but in hunting these cunning crustaceans we fell into sinking mud and then decided, with Dad up to his knees, that it was time to pull the pin.

We left Engels Landing on day six with hopes of reaching the top lake and Narangie Sands. We spotted a dolphin and a goanna while travelling up the river and soon landed at Legges Pier.

Dad and Papa emptied the Porta Potties and everyone got an ice cream. Once we got out of the river and into the lake, the wind was noticeably stronger and we moored in a sheltered bay for the night near Long Point.

That afternoon was spent swimming and paddle-boarding backwards and forwards from the two boats.

We reached Narangie Sands on day seven. The boats were backed into the beach and Independence (or the poo-barge as most locals call it) showed up and once again Dad emptied the Porta Potty. We spent the rest of the day swimming, playing Frisbee and throwing a tennis ball around!

Day eight was the same, but we think that we added paddle-boarding and reading into that mix.

On day nine we decided to sail to Shelley Beach in the afternoon, and so the morning was more of the same, reading, swimming and paddle-boarding. Not before long Independence had once again arrived. The Porta Potties were emptied and we were sailing towards Shelley Beach. As soon as the boats were secure we went for another swim.

Day ten and eleven were sweltering hot and they were spent swimming, playing Frisbee and Marco Polo, reading and paddle-boarding. On the night of day ten, Dad, Papa and I (Ella) went fishing on nightfall in Papa’s little tender. We ended up catching three silver bream but apparently it looked like we were sinking from the shoreline.

Day twelve was once again moving day. We had a stop at Legges Pier to empty the Porta Potty and get an ice cream and a few more supplies, mostly packets of chips!

Then set sail for Mungo’s Brush.

We backed onto the beach and tied up, but we were right next to the boat ramp so we could only paddle. Later in the day, we walked over to the swimming hole and played until dinner.

We woke to day thirteen to a heavy downpour of rain. It got to 10:30 and it looked like it had all passed, so Grandma and the two of us went on the two kilometre rainforest walk and managed to see a bearded dragon, blue tongue lizards and a bush of wild tomatoes.

That afternoon, we moved the boats nearer the swimming hole and away from the boat ramp. Then Dad and Papa went up over to the surf beach to try and catch some fish with no such luck.

We saw a pod of twenty dolphins which was exciting!

Day fourteen was spent swimming and playing in the water, still at Mungo Brush. Dad and Papa once again went fishing at the surf beach, but had no luck again.

On day fifteen, we headed back down the river towards Port Stephens. We were halfway down the river and it starts bucketing with rain, Mum and the two of us took refuge inside the cabin whilst Dad steered the boat in the right direction.

We stopped for the night in Tea Gardens. Now drenched and sodden, we all walked up to a café to get an ice cream. We lounged around for the rest of the day before getting fish and chips for dinner and playing celebrity heads.

We left Tea Gardens on day sixteen with a coffee in everyone’s hand with the plan to sail around Port Stephens looking for dolphins. We motored under the Hawks Nest Bridge and on our starboard side was a dolphin!

Well, that did not take as long as expected.

Nevertheless, out of the river and into Port Stephens we went. There were not any dolphins to be seen so we started following the dolphin watching boat.

In the end we saw a pod of six dolphins before we thought it was time to head to the marina. We were all looking forward to a nice warm shower!

This was it! Pack up on day seventeen!

We put the mast down in the marina and took a few more snaps with the camera before heading to the boat ramp where we saw a turtle. We packed up the boat and said goodbye to Papa and Grandma before jumping in the car for a Harry Potter marathon.

We ended up in Gundagai for the night before continuing to Melbourne the next day!

Wow! It was an exciting trip and we definitely have plans to go back and visit Port Stephens for a little longer.

Now, before we leave you, imagine yourself completing this trip; Dad has requested us to fit in a few quick facts:

Our major issues of the trip, besides the broken down fridge that Dad fixed, was the power consumption of the fridge. We discharged both 80amp/hr batteries over six days, to be recharged with a generator. Bon voyage!