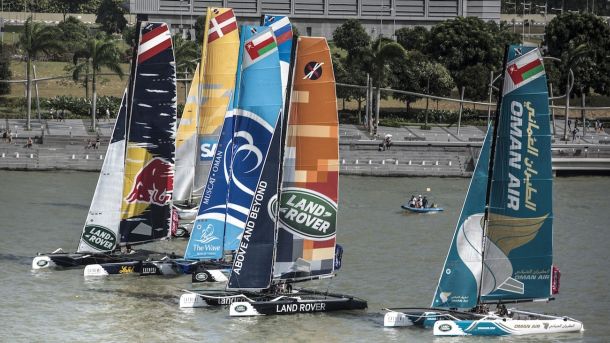 The penultimate day at the Extreme Sailing Series in Singapore saw yet more change at the top of the leaderboard with the day going to the Austrians on Red Bull Sailing Team, who lay down the marker to put them in pole position ahead of the final day of racing tomorrow. The three front-runners, including SAP Extreme Sailing Team and The Wave, Muscat, traded places throughout the day, but the double Olympic champions from Austria made all the right strategic decisions, getting off the start line superbly and barely putting a foot wrong to deservedly lead the fleet. With one day left on the compact stadium in Singapore, it is all to play for.

“We know from the past that the last day of the regatta is the most important and we still have to keep it up,” commented Red Bull skipper Roman Hagara after racing. “It was an almost perfect day for us, a few little mistakes but I think if we do the same tomorrow it’ll be fine. Last year we were so close to winning the Act, so now I think it’s time for us to win. Everyday we have a debrief and we look at the mistakes from the previous day, we try to eliminate them the next. It’s an easy concept but I think it’s difficult to do on this racecourse.”

Closing out the day win a race win after a tactically brilliant match race with Red Bull Sailing Team, SAP Extreme Sailing Team are now just three points behind the Austrians, with co-skipper Rasmus Kostner speaking candidly about his main competition. “We do look out for Red Bull and The Wave, Muscat. If we can make life difficult for them we do: they are sailing well, and of course we don’t want to let them through. We really showed our consistency and are happy with the finish we had.”

The vastly experienced team on The Wave, Muscat which includes skipper Leigh McMillan, with Olympic double gold medallist Sarah Ayton calling the tactics, added two race wins to their tally, as did Gazprom Team Russia, who lead the pack chasing the podium in fourth place.

Up and down winds, which saw everything from 3 knots and gusts up to 26 knots, made it hard to judge the time and distance to the start line, and the boats who got it right reaped the rewards, able to get their noses out in front and avoid the mealy at the top mark. One team who had their starting tactics nailed were Team Aberdeen, the best starter according to the SAP sailing analytics, who continued to close the points gap on the leaderboard, including taking a race win in front of their home crowds.

“It’s always great racing in front of a home crowd and that’s the beauty of the event. You have the energy of the crowd, and we’re pretty spoilt here as the home team”, commented skipper Nick Moloney. “Singapore is really unique, we talk about iconic cities, and the whole stadium format and I honestly don’t know where it gets any better than here. With the hard boundaries with spectators on every corner, it’s just an incredible atmosphere. Here we’re racing in the heart of the city and hopefully we’re putting on a good show.”

Oman Air under British Olympian Stevie Morrison seem to be quickly getting to grips with the stadium racecourse, as do the new Italian team skippered by Lorenzo Bressani. But it was GAC Pindar who were perhaps most impressive, the new line up adding a notable two race wins to their tally, the third best performers on the water in terms of points today, to upgrade their overnight position from eighth to seventh. Summing up the day, their skipper Seve Jarvin commented: “I’m absolutely loving it. The guys did really well today, I just stuffed up the last race by being too aggressive, we should have got a third and we ended up getting a penalty at the finish and that sort of screwed us. But in general today was awesome and the guys did a really good job and are happy.”

With one day left of racing in Singapore, it is still all to play for, with the accolade of winning the opening Act of the season well and truly open for the taking, and with a forecast that will continue to challenge the teams, the battle on Marina Bay is far from over. Tune in and watch the final races, including the final double-pointer, from 1600 local time, www.extremesailingseries.com.