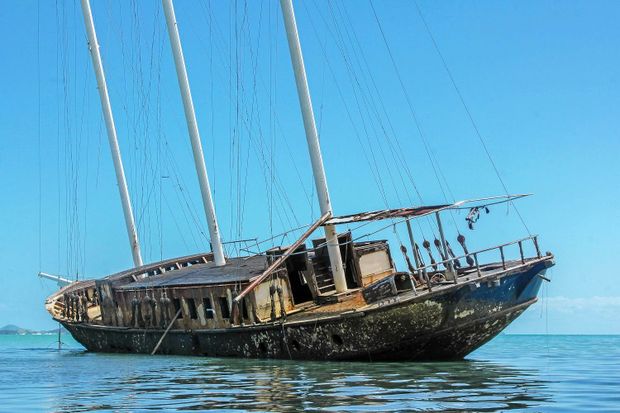 Whitsunday Magic is set to be removed from Cannonvale Beach by authorities. Photo Peter Carruthers/Whitsunday Times.

FOR Allen Grundy, the gut-wrenching feeling when he heard his former tall ship Whitsunday Magic had sunk is still very raw.

And he is reminded of the heartbreak each time he looks out of his bedroom window in Cannonvale to see the wreck he on-sold now lying stranded off Cannonvale Beach.

But he may not have to be reminded of the memory for much longer, with the ship expected to be removed by Maritime Safety Queensland in the near future.

In 2011, the ship – then a luxury vessel owned by Mr Grundy and his business Australian Tall Ship Cruises – sank for unknown reasons at Shute Harbour.

The ship was then considered a write-off and bought by its existing owner that same year.

While anchored off Cannonvale following the sale, strong northerly winds pushed the ship to where it rests today.

MSQ general manager Patrick Quirk said a process was under way to remove the wreck but with court action now being taken, it wasn't known how long it would take.

“The owner hasn't always been co-operative and we've reached the stage now where our patience is worn,” he said.

Finish reading at the Whitsunday Times.