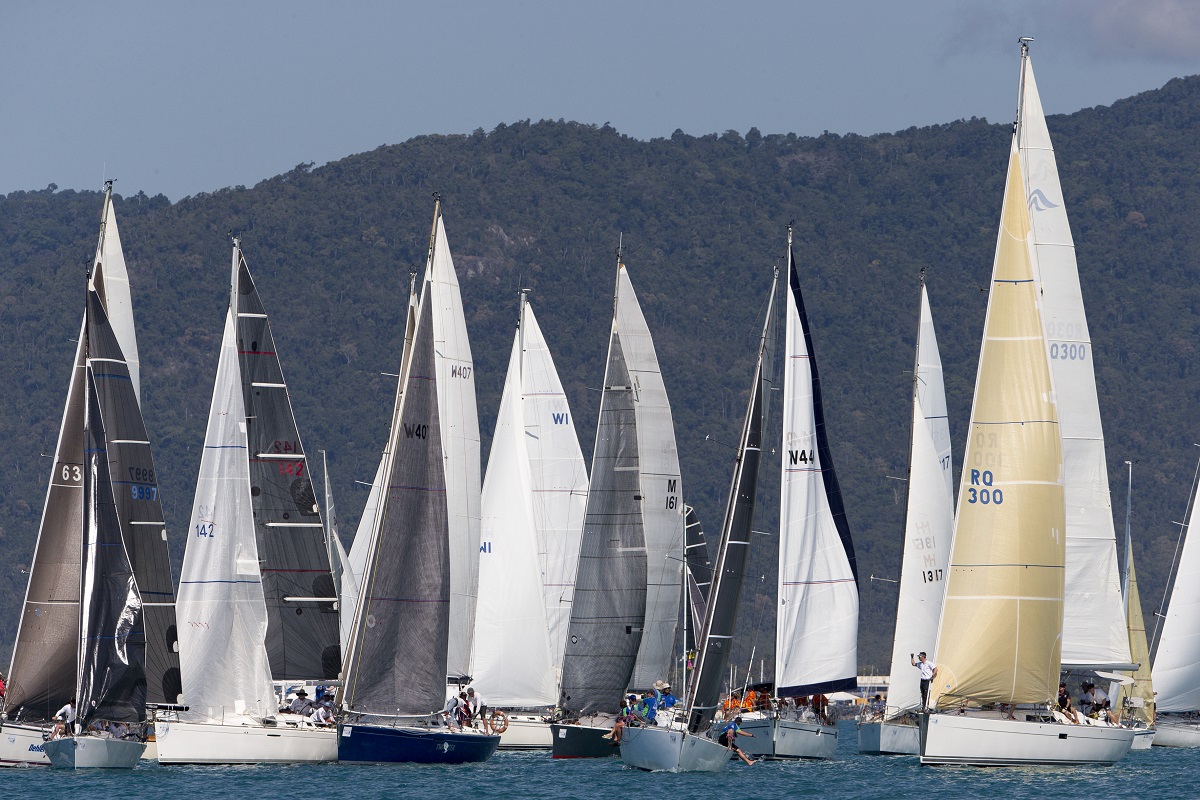 Competitors are gearing up and looking forward to racing in the warm climes at Airlie Beach Race Week where the shore side entertainment is guaranteed to be as action packed as the racing.

Boosted numbers across the board will make for a stimulating program in 2016.  The Cruising divisions are swelling in numbers for the 27th running of the increasingly popular Whitsunday Sailing Club hosted event. And why not – with so much to take in – on the water and onshore.

Race Director, Denis Thompson, has again composed thoughtful and varied courses to keep all-comers on their toes and happy.

In the spinnaker divisions, 30 owners have already announced their intention to compete. The famous Holy Cow! owned by John and Kim Clinton, was the first entry received by Whitsunday Sailing Club for this year’s Festival of Sailing.

The Clintons will have other regulars for company, including Geelong, Victoria’s Bundaberg, the Adams Radford owned by John Kint and a famous blast from the past in Hammer of Queensland, the 29 year-old Kel Steinman pocket maxi originally owned by Arthur Bloore, but now campaigned by Michael Ireland.

Ireland says of the yacht, which was lengthened from 66 t0 76ft in 1992, “She has won a race at every appearance at Airlie Beach Race Week, so look out!”

The well-travelled Biddy Hu 11 returns from Victoria, escaping winter for the delights of warm Airlie Beach. Paul Lindemann’s Beneteau 49 has competed locally, including the Melbourne to Hobart and crossed the border a few times to compete in the Sydney Gold Coast Yacht Race and Airlie Beach Race Week.

Don Algie, founder and long-term sponsor of Race Week also returns with his Van de Stadt 55, Storm. Algie, a fixture with his various Storms, always receives a warm welcome from locals and other competitors alike.

In the non-spinnaker division, female owners representing the host club are prominent. Helen Henderson has entered her Northshore 340, Island Time and Heather Sutton is bringing her Moody 45 DS, La Quilta to take on the opposition.

Onshore, the music line-up is a veritable feast, anything from Reggae (The Natural Culture) on the opening night to old favourites from the 80’s and 90’s (Jan Arns) the following night. On the third evening, Saturday 13 August, The Cadillacs will play 50’s and 60’s favourites.

Sunday night will feature Blues from the popular Mason Rack Band, and as Monday is the lay day, Gold sponsor, Pantaenius Marine Insurance, will make a contribution to the festivities, much to the delight of competitors.

On Wednesday night, Sun Salute will lift the roof off with a combination of reggae, neo soul, jazzy hip hop and ragamuffin, and to close the event, The Hillbilly Goats, with their colourful costumes, stories and songs will have everyone up and dancing.

Competitors, family, friends and Airlie Beach locals are all invited to rock the nightly parties back at Whitsunday Sailing Club, so put the dates on your calendar.

Entry for Airlie Beach Race Week 2016 closes at 2400 hours on Friday, 5 August, 2016. The race committee may accept late entries after this date subject to an additional late fee.

Entry and Notice of Race online at: www.abrw.com.au/sailing/entries