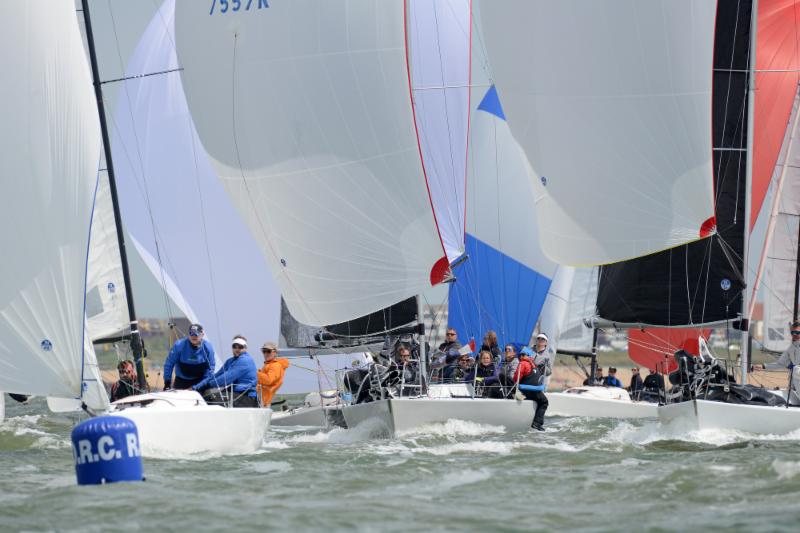 The past three days has produced tantalisingly close racing for the 72 boats in the Vice Admiral's Cup – an increase of 40 per cent on last year's entry. Despite what initially appeared to be an unpromising forecast, six to eight races were completed in each of the eight classes, in winds varying from five knots to a squall of more than 20.

This regatta is renowned for fast-paced close racing and this year proved to be no exception. There were many changes of leader across every fleet, while 23 different boats achieved at least one race win, and double that number scored at least one podium finish.

Summer sun returned for today's racing, with bright sun and rising temperatures, but initially without any wind. The committee boats left the dock when the beginnings of a southerly of 2-3 knots sprang up in the central Solent at 1030. Half an hour later it had swung into the south east and increased to 8 knots and the AP flags signalling the postponement came down at 1100.

The Fast 40+ fleet started the day with Niklas Zennstrom's Ran leading the series counting only four first places, having discarded a fifth place scored in yesterday's third race. However, four boats, separated by only two points, were locked in battle for second overall. Michael Bartholomew's Tokoloshe led this group on 12 points, ahead of Steve Cowie's Zephyr and Peter Morton's Girls on Film, who were tied on 13 points, while Niall Dowling's Arabella held fifth overall on 14 points.

The class had three short races today, the first of which was held in a building east-south-east breeze and a strengthening east-going tide. Girls on Film started prematurely, while Ed Fishwick's Redshift bailed out early before the gun, gybing onto port. Redshift then held out alone on the right hand side of the course, before leading into the windward mark on the port layline, tacking a length ahead of Ran.

They were followed by Zephyr, which had a small lead on Fillip Englebert's Elvis and Tokoloshe, with all three overlapped on the short spreader leg. By the finish Zephyr had slipped back to fifth place, while Redshift took second place, six seconds ahead of Girls on Film in third place.

In the next two races Ran scored a first and third, finishing the series with a commanding overall lead of nine points. A second and fourth for Girls on Film was just enough for Morton to secure second overall, half a point ahead of Tokoloshe's final score of 22.5.

“We've had big tides and big windshifts, which made for tight layline calls,” says Ran navigator Tom Needham. “It's great that the race committee was able to get so many races off in tricky conditions and we've been really happy to see all the boats on the water, including new teams, for the first Fast40+ event this year.

“Today we were racing in deeper water, with big differences in the tide across the course – there were some big tide lines out there – so there were big gains or losses depending on which end of the line you started.”

The Performance 40 class went into the final day with a much tighter leaderboard – Christopher Daniel's J/122e Juno led the class, counting four points from three races, just one point ahead of Michael Blair's King 40 Cobra.

At the start of the opening race another King 40, Roger Bowden's Nifty, headed out to the right hand side of the course, gaining a similar advantage to Redshift. Bowden got to the top mark at the same time as Ian Schenkel's Ker 39 Rumbleflurg, with both followed quickly by Juno and one of the lowest rated boats in the fleet, Andrew McIrvines' Fast 40 La Reponse. At this stage Cobra was well buried in the pack.

Juno was first across the line, saving her time on La Reponse by 14 seconds. Another First 40, Richard Patrick's Dusty P, took third on corrected time, just 12 seconds behind La Reponse. Juno took another decisive victory in the final race to win overall 10 points ahead of Cobra. Nifty and Dusty P tied on 17 points, with the former taking third overall thanks to her victory in race four.

At the start of the day five boats were still in contention for a podium place in the J/111 fleet. A win in both of today's races sealed Tony Mack's class victory on McFly, 6.5 points ahead of Joerg Sigg's Lallekonig. The three-way fight for third was resolved in favour of Chris Jones' Journeymaker ll, thanks to his two second places today.

Last year's J/109 class winner, Simon Perry's Jiraffe went into the final day one point ahead of Chris Preston's Jubilee. Both were neck and neck at the end of the first run of today's first race, with Jubilee rounding the mark inside Jiraffe. Both had been late to drop their spinnakers, which were still hoisted to the lower spreaders as they turned up to windward. Jubilee was quick to complete the drop, however Jiraffe had a snag and had slipped to leeward and astern by the time it was sorted.

In a tight finish that saw more than half the fleet cross the line in just 22 seconds, Perry's team recovered to lead by 12 seconds ahead of Jubilee, with RNSA's Jolly Jack Tar taking third place five seconds later and David Richard's Jumping Jellyfish fourth, just five seconds after that.

Jubilee won the final race, but Jiraffe took second, 19 seconds ahead of John Smart's Jukebox. It was enough to seal overall victory for Jiraffe by one point. A very consistent performance by Jumping Jellyfish, with an almost straight run of fourth places, secured third overall, one point ahead of Jolly Jack Tar.

Only four points separated the top three boats in the HP30 fleet at the start of the day. Their first race saw an incredibly tight finish in a building breeze and the fleet in full planing mode – the first four boats crossed the line in just 26 seconds. Sture Wikamn's MC31 Vitres led the fleet, but as the highest rated boat he failed to beat Malcolm Wootton's Farr 30 Pegasus, Glyn Locke's Farr 280 Toucan, or Tim Cunliffe's Farr 30 Insatiable on corrected time.

With the top three teams now only two points apart, the pressure was on for the final two races. Locke's crew rose to the challenge, winning both races and taking overall victory by a four point margin. A pair of second places for Wootton sealed his second place overall. “It was a really great event, with such close racing,” says Locke. “We rounded some marks four abreast and it was so tight we didn't know we had won until we saw the results.”

The J/70 class used the regatta as Round 3 of their 2019 UK Class Grand Slam Series. A win in both races today saw Paul Ward's Eat, Sleep, J, Repeat cement overall victory ahead of Clive Bush's Darcey, while reigning Grand Slam Champion, Doug Struth's DSP, was third. All races were decided by a minute or less, with race five going to Eat, Sleep, J, Repeat by just five seconds from Darcey.

“This was the first time for the J/70s at the Vice Admiral's Cup and the race team did a great job for us, with six exciting races over two days,” says Ward. “Onshore at the RORC clubhouse we enjoyed catching up with the other classes over a few beers and a curry. Thanks to all of the team at RORC for a great event.”

Christian Sutherland's Reach Around dominated the SB20 fleet in the first half of the regatta, with three straight wins. However his consistency slipped midway, allowing Charlie Whelan's Breaking Bod to hold the overall lead by one point going into the final day. A further two wins sealed overall victory for Whelan, while a pair of seconds for Sutherland kept him seven points ahead of Charles Sheppard's Sharc, who finished in third place overall.

This shuffled the overall leaderboard, with Morton dropping into second place, only half a point behind Southworth. However, Morton got the better of him in the next two races, winning each one by a decisive margin and taking overall victory by 1.5 points. Tony Hayward's Blackfun was third overall, but on almost double the Southworth's points, and just one point ahead of fourth-placed Metherell.

“I'm really pleased,” says Morton. “Sam has dominated the class for a long time, so I'm very happy to win this trophy back. We've had incredibly close racing and the race team has done really well to get eight good races completed.”