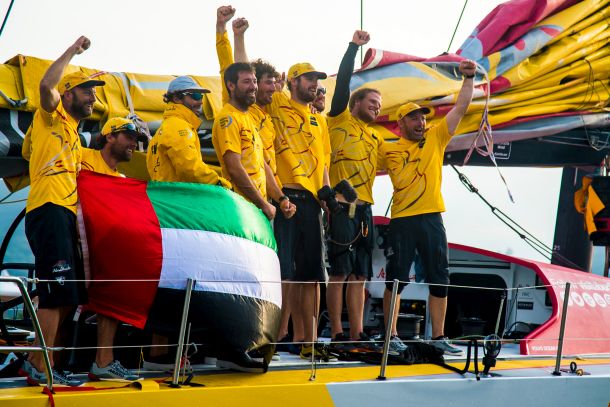 In 2012, Walker’s crew were forced to return to Auckland with hull damage and eventually retired from the leg to Itajaí, Brazil. They must have feared more of the same when Cyclone Pam delayed the departure from New Zealand for three days, but despite taking the worst that the Southern Ocean and then the south Atlantic could throw at them, the Emirati team emerged triumphant after nearly 19 days of ultra-challenging, super-tight sailing.

Amazingly, skipper Ian Walker reported that they had reached Itajaí with the least amount of work for their shore crew to do of any leg so far in this edition. To add the icing to their cake, Abu Dhabi Ocean Racing set the new best mark in the chase for IWC prize for the most nautical miles (nm) sailed in 24 hours with 551nm leading up to Cape Horn.

“Awesome. It’s been such a monster of a leg, we were so, so stoked with the 24-hour record,” said a jubilant Walker, 45, straight after crossing the line in front of a waterfront packed by thousands of spectators. “That (IWC record) was actually what got us back up with the leaders. Since then we have sailed very, very well. It’s a very tight finish.”

He credited his team’s versatility for much of their success (elapsed time for Leg 5: 18 days 23 hours 30 minutes 10 seconds). “Seven out of eight of our guys drive, so nobody has to drive for too long. We rotate everybody and I can’t speak highly enough of everybody in our team.”

He added that he dropped the keel on two occasions in the heaviest of the weather with 50-knot winds (92.6 kilometres an hour) buffeting the fleet, losing some ground, but keeping his boat intact.

“In hindsight, that looks a pretty shrewd decision,” Walker said.

The stage victory leaves Walker’s team seven points clear at the top of the standings with five of the nine legs now completed. That gap was opened up following the misfortune of a broken mast, which struck Dongfeng Race Team (Charles Caudrelier/FRA) early last Monday and led to their retirement from the leg two days later.

The Chinese boat is now being sailed, partly under motor, to Itajaí where its shore crew face a race against time to have the new mast refitted in time for the start of the next leg to Newport, Rhode Island, on April 19. They will pick up eight points (low points wins) after failing to finish the stage and now stand on 16, still in second place, but only two ahead of MAPFRE and Team Brunel. Team Alvimedica are one further behind with Team SCA expected to finish on 29.

Walker, in his third race, is far too experienced to take anything for granted yet, however, despite becoming the first team to clinch their second stage win of the 2014-15 edition. The leg was incredibly closely fought throughout its 6,776nm with MAPFRE (Iker Martínez/ESP), Team Alvimedica (Charlie Enright/USA) and Team Brunel (Bouwe Bekking/NED) chasing Abu Dhabi Ocean Racing all the way to Itajaí and finishing in that order.

Abu Dhabi Ocean Racing beat the Spanish team by a little over 32 minutes with less than an hour separating the leading four. As usual, Walker barely enjoyed a wink of sleep over the final 48 hours with his pursuers no more than 2-10nm behind him all that time.

Apart from the closeness of the racing – virtually unprecedented in the 41-year history of the race – the leg will be remembered for living up to its reputation as the most fearsome in the nine-month offshore marathon. Along from Dongfeng’s broken mast, there were at least three cases of Chinese gybes when the boats crashed to their sides before righting, and there were numerous cases of other sail and equipment breakages.

Team SCA (Sam Davies/GBR) had more than their share of problems, damaging three sails and then suffering a port rudder breakage on Sunday. They are expected to finish the leg on Tuesday.

In all, the fleet will cover 38,739nm and visit 11 ports and every continent. The race concludes in Gothenburg, Sweden, on June 27.