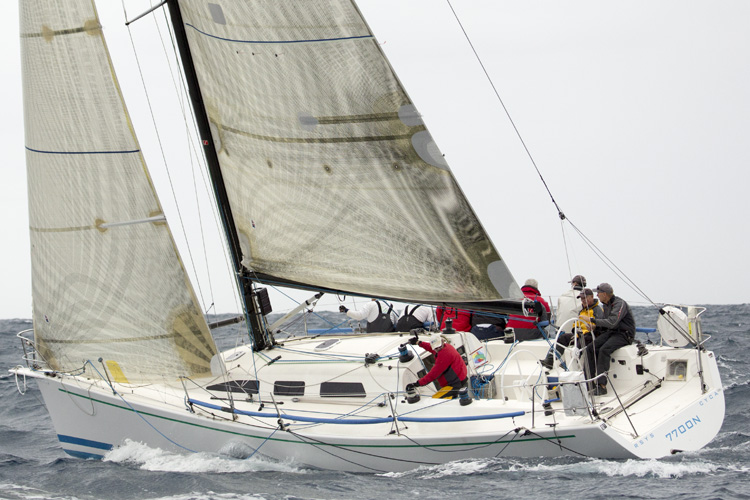 For the second year in succession, Julian Farren-Price has sailed his Cookson 12, About Time to victory in the Lion Island Race, the opening race of the Cruising Yacht Club of Australia’s 2015-2016 Ocean Pointscore (OPS).

Farren-Price, who won his fifth consecutive OPS title last year, is yet again in top form, out-sailing the likes of 1998 Sydney Hobart winners Ed Psaltis and Michael Bencsik, second place getters today with their Ker 40 Midnight Rambler. They were just shy of three minutes behind the winner on corrected time. Adrian Van Bellen’s Jackpot, which finished third overall in in last season’s OPS, was third today.

Farren-Price, who was surprised to discover About Time had won the race, said that 20 minutes prior to the start, the water was almost glass. “Then magically, on time, a little nor’ easter appeared,” he said.

“We didn’t get off on time though. We were caught barging at the start and had to go back, but it didn’t hurt us. We took the eastern side of the Harbour and got out nicely. In the past, that hasn’t been the right tactic, but it was today,” the Sydney jeweller said.

The race started at 10am off Point Piper in little breeze but under a sunny sky.

Principal Race Officer, Robyn Morton said, “We got the boats away in a sick 4-5 knot north-easterly. It was quite patchy, so the fleet was spread out. Triton and Balance got to Lion Island fairly smartly though – both boats were around the Island around 1.30pm.”

Throughout the race, the north-easterly stayed mainly in the 7-10 knot range and tending right as the day progressed, but Farren-Price said it kicked in to 12 knots 100 metres from About Time finishing the race.

“We had a lovely work up to Lion Island. We kept up with Midnight Rambler, Merlin, Elena Nova and St Jude until Long Reef, so I was happy with that,” Farren-Price said. “It was pretty much straight lining all the way home and a nice way to work our way back into the series.

“We hadn’t sailed for six months, but the crew work was flawless. I am proud of the crew – they’re pretty much the same crew as I had last year – and of my boat. The two new Doyle spinnakers helped,” he ended.

The nine-race OPS series continues on Saturday October 31 with the Botany Bay Race, starting from 10am on Sydney Harbour.