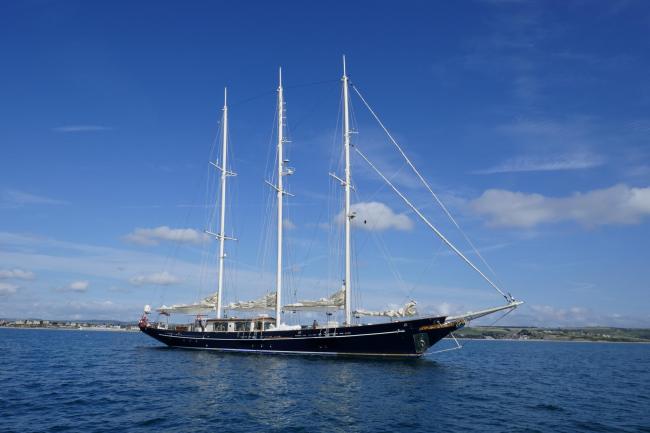 Katie Williams of the Dorset Echo reports on another beautiful yacht saved by caring new owners:

A derelict ship which was transformed into a luxury superyacht sailed into town for a fleeting visit.

Malcolm Miller, a historical schooner which was revived after being found washed up on the coast, sailed into Weymouth Bay this morning. The 45m boat made the pit-stop visit whilst sailing back to its dock in Plymouth, from Holland.

Paul Dallaway, a local boat skipper, saw it sail into the bay. He said: “She is of interest to Weymouth as for many years she was a sail training vessel that visited the port. She came in this morning at anchor off the beach, and she sailed at 12.30pm.”

Malcolm Miller was one of the original three-masted topsail schooners used in the 1960s by the Sail Training Association, now named the Tall Ships Youth Trust. It was used as a tall ship training boat until it was decommissioned in December 1999, after 32 years’ service, when it was sold to private owners.

The ship suffered damage following a fire in 2008. Its then owners abandoned it mid way through a refit, and it was found washed up off the Cornwall coast some time later. Its current owner made an offer for the abandoned yacht in 2012.

Just under two and a half years later, it was reborn as a stunning sailing superyacht following a huge restoration project.