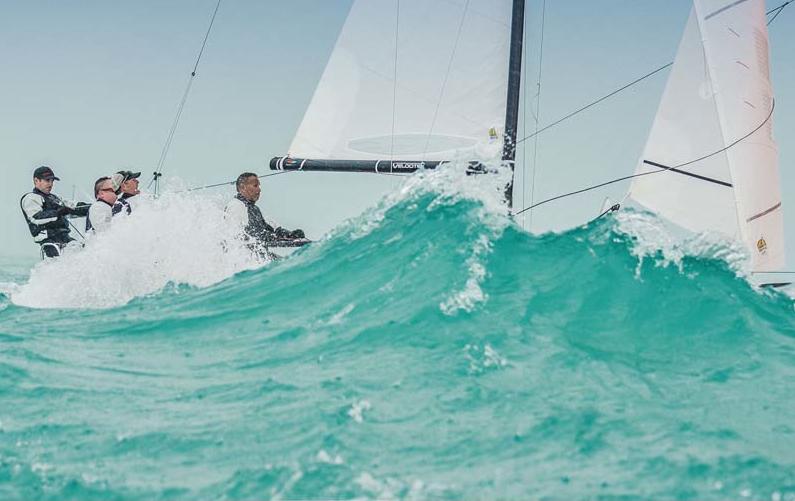 Key West, FL, USA – Lightning, thunder and torrential rain opened the final day today at Quantum Key West 2016, with organizers debating if the conditions were safe to proceed with two races to finish the J/70's, Melges 24's and C&C 30's in Division 2 and one for all other classes.

With several titles at stake, but bad weather threatening, this was not an easy call. Forecaster George Carras from Commander's Weather described the moist tropical conditions in the atmosphere as “juicy and unstable,” with a chance for more cells, but with nothing on the radar the fleet headed out of one more day of battle.

When they got out the harbor and headed into the southerly, the forecasted 8-15 knots turned out to be 20+ and building, with monstrous seas enhanced by the south-flowing ebb tide, especially in the Division 4 and Division 1 pre-start course areas. These seas hampered the Race Committees in their efforts to set marks and establish their race courses, so the PRO's pulled the plug for these classes for the day.

But racing proceeded on the Division 2 and 3 areas where the ebb tide was not as strong and produced nothing more serious than some OCS calls for some teams.

“It was wild out there. For the last couple legs the wind was north of 30 knots and the waves were real big. We hit 16 knots surfing downwind with the kite,” said Robin Team, skipper of the ORC 1 class champion Teamwork. A win in this final race gave the North Carolina boat a total of seven bullets for the week with a low score of 13 points, five better than fellow J/122 Orion (Paul Milo, Leesburg, VA).

“It was a great week with incredible conditions and we're thrilled with the result,” said Team, who has now captured class honors at Key West Race Week four times. “Our entire crew worked really well all week. Jonathan is a master tactician and consistently put us in the right position.”

Elsewhere on Division 3, skipper Henry DeGroot and his crew on Wired completed an impressive victory in ORC 2 class by winning Race 10. Simona Pasqua served as tactician on Wired, which won five races and finished second in four others in totaling 16 points – 10 less than runner-up Rattle N Rum, a GP 26 sportboat skippered by Mike Beasley (Annapolis, MD).

“We are surprised and delighted. We have to thank the people who put together ORC for the great number they gave us. We were very happy with how our rating worked out,” said DeGroot, a resident of Newton, MA. “This is our third straight Key West with the same crew. It's always a fantastic regatta and we love coming here, but winning certainly puts a golden tinge on things.”

Four of the ORC 2 entries elected not to compete on Friday and DeGroot admitted his crew had never raced in such severe conditions. “Today was about surviving. There were a lot of gear breakages and other issues on our course and we just had to find a way to get the boat across the finish line,” he said.

Mike Bruno and the Wings team led at the end of each day's racing en route to topping J/88 class. Bruno, from Armonk, NY, won Race 3 then finished second in five of the last six starts. This was Bruno's first trip to Key West as skipper of his own boat. It was only his fourth event since taking delivery of the J/88.

“This is one of the world's great regattas so I'm pretty excited,” Bruno said. “We had real good boat speed and I think the key was we were real consistent.”

Skipper Carlo Alberini and the crew of Calvi Network also led from start to finish in capturing the J/70 overall class win for the second straight year in Key West. Branko Brcin called tactics for Alberini, who got the gun in five races and finished second or third in four others to finish with an impressive 15 points.

“I come back every year to Key West because the regatta is so good – always great wind and excellent race management,” said Alberini, who previously raced a Farr 40 and Melges 32 here. “I have no words to describe how happy I am. This is just fantastic.”

“My crew is amazing. I am so lucky to have three very talented sailors. Sailing is a team sport and the best helmsman in the world cannot without a strong crew,” said Alberini, who earned the Quantum Sails Boat of the Day honor today.

Skipper Peter Duncan (Rye, NY) and the Relative Obscurity team were runner-up in J/70 class with 27 points, four ahead of Tim Healy (Newport, RI) and the Helly Hansen crew. Skipper Luis Bugallo and the Spanish sailors on Marnatura were the top Corinthian entry, finishing seventh.

It was a wild ride for all the boats on Division 2 with the J/70s, Melges 24s and C&C 30's not enjoying the slamming upwind but reveling in the planing downwind conditions. British skipper Richard Thompson steered Black Seal to overall victory in the 12-boat Melges 24 class, overtaking Blind Squirrel by winning Race 10. Jamie Lea called tactics for Thompson, a class veteran who achieved a bucket list item by winning their class at Quantum Key West 2016.

“I've always loved this regatta and now I can die a happy man because I finally won here. We are just over the moon about this accomplishment. About the only regatta I would prefer to win more than Key West would be a World Championship,” said Thompson, who lives in London. “I'm delighted for the crew. Every man did their job impeccably well. They actually had to make up for me so I'm quite proud of them. I can't remember one crew error in any race.”

Skipper Walt Thirion and the Themis team placed fourth in Race 10, but held on to edge out closest rival Extreme2 (Dan Cheresh, Holland, MI) by just two points in C&C 30 class. Geoff Ewenson called tactics on Themis, which won two races and placed fourth or better in seven others.

“The one-design racing in our class was excellent. It was a lot tighter than previous events and we had a lot of different winners. All the boats are getting better, which is good to see,” said Thirion, who lives in Colorado and bases his boat out of Annapolis. “We did a good job of getting off the line in most races and made smart decisions on which side of the course to take. Racing at this level is all about minimizing mistakes and our team executed well all week.”

Division 1 principal race officer Ken Legler said steep waves he estimated at six feet battered the committee boat and made it almost impossible for the volunteers onboard to do their jobs. Because the situation was unmanageable, Legler was forced to abandon racing on his course.

That means the results from Thursday stand and made Quantum Racing a narrow winner in IRC 1 class over fellow TP52 Spookie. Skipper Doug DeVos, who won the same class at Quantum Key West 2014, closed the regatta with three straight wins to nip skipper Steve Benjamin (Norwalk, CT) and Spookie by a half point. Morgan Larson served as tactician aboard Quantum Racing, a multi-time winner of the 52 Super Series.

“It's always wonderful to win Key West. What a great regatta and what fabulous sailing. I thought the team was just magnificent. I'm just really proud of everybody,” DeVos said. “What the whole team does to prepare the boat is outstanding. It's always dialed in perfectly for the conditions. And what they do to get it around the course is spectacular. To drive this boat is a dream because you don't have to worry about anything but driving because you know everything else is covered.”

DeVos also had high praise for Benjamin, who was just named 2015 Rolex Yachtsman of the Year. Spookie also had four bullets and three seconds with the difference in the regatta coming down to a fourth place finish in Race 3 for Benjamin's team.

“Steve and the entire Spookie team are terrific, just outstanding sailors. It was neck-and-neck the whole way. They sailed incredibly well and really pushed us hard. Fortunately, we were able to eke out a few seconds here and there on the race course,” said DeVos, who was presented with a special award for his contributions to the sport of sailing at tonight's final prizegiving ceremony.

Bella Mente, which clinched victory in the Maxi 72 class on Thursday, was selected as Quantum Boat of the Week. Skipper Hap Fauth steered his big blue boat to first place in six of nine races in a class that was extremely close this year.

Two of the most dominant race week champions were on Division 1 with Christopher Dragon capturing IRC 2 by 13 points and Skeleton Key securing J/111 class by 14 ½ points. Owned by Andrew and Linda Weiss of Mamaroneck, NY, this Sydney 43 finished second in Race 1 then proceeded to reel off eight straight wins. Legendary sailmaker Butch Ulmer served as tactician and Larry Fox as navigator for Weiss, who has known both men since he was 14 years old and crewing on his father's boat.

“We worked really hard this year to get the boat going fast. We've worked hard on our sail program and have improved our upwind speed,” Weiss said. “I've had pretty much the same crew for the last couple years and we work well together. We're just sailing really well and I give all the credit to the crew.”

Christopher Dragon led at every mark rounding from Race 2 through 9. Weiss said the Sydney 43 performs very well in heavy air, which prevailed all week in Key West.

The Sailing World Trophy honoring the best performing team composed of junior sailors went to the crew of Eagle's Eye, Matt Wake's Fareast 28R in ORC Class 2. The crew of Sam Tobio, Grant Boicheff, Nevin Avilza, and Blaire McCarthy are from the St Petersburg YC Junior Sailing team, and along with Todd Fedezsyn had an average age of only 21 years old.

Skipper Peter Wagner and the Skeleton Key crew made a successful debut at Quantum Key West, winning J/111 in dominant fashion. Skeleton Key, which does most of its racing on San Francisco Bay, also reveled in the big breeze while notching seven bullets and a pair of seconds.

“I really enjoyed my first Key West. We had great conditions and it was a really well-run event. The race committee did a fantastic job,” said Wagner, who hails from Atherton, CA. “We're just really fortunate that we managed to sail consistently and we had a lot of fun doing it. We got off the line well and Seadon did a great job of managing things tactically on the course. We had really solid boat speed throughout.”

Defiant, a New York 40 owned by John Streicker of New York City, won all three-distance races in the Performance Cruising class, a new feature at this year's event. The entries in both this class and the multihulls started and finished near the harbor, with courses set around government buoys south of the island.

And the winner of the Multihull class, like the performance cruisers, also won in straight bullets: Tom Reese's Corsair 28R Flight Simulator from Youngstown, NY bested the much larger (and luxurious) Gunboat 60 Arethusa, owned by Phil Lotz.

Complete results, photos from Max Ranchi and Sara Proctor, and videos from T2P.TV are available on the event website atwww.keywestraceweek.com.