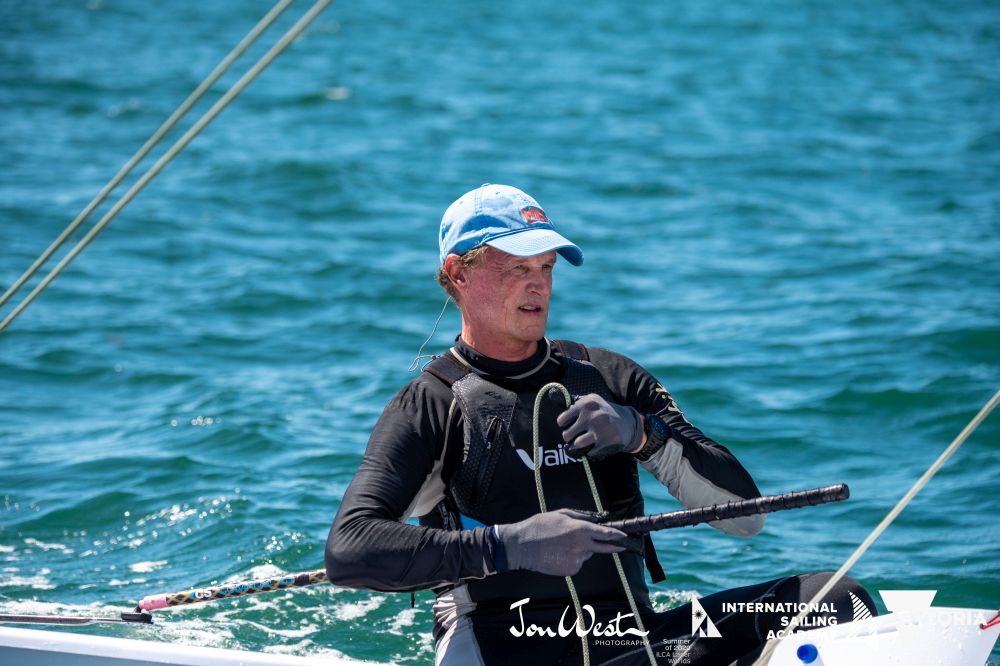 There were some very weary Masters sailors hauling their boats up the beach on the last day of the Oceania and Australian Laser Masters Championship. It was a glorious sunny day in Geelong, but the wind was shifting up to 40 degrees and varying by as much as 10 knots in pressure.

“It was vang on, vang off, outhaul on, outhaul off, sheet on…” said Jan Scholten, who finished third in the Standard Grand Masters division.

His comments were echoed by most of the fleet, with even the division leaders describing it as a tough day.

Jon Emmett from Great Britain was the only competitor in the Radial Apprentice division but until today he had been beating the Masters and Grand Masters as well. “I had a big lead in the first one but made a few mistakes,” he explained. “I went right on every beat and that wasn’t necessarily a good move. But it was good to get some tactical racing instead of just a boat speed test. It was a well run event and a lot of fun.”

Brett Beyer spoiled his perfect record in the final race of the series, getting a second to go with his five bullets in the Standard Masters. He described the day as “super challenging tactically” but said it was good to have a variety of conditions for the six races sailed.

Owen McMahon started the Radial Masters with a stream of bullets but had a second and a DNF today. That left him a single point ahead of Kiwi Edmund Tan, who won both races. McMahon described it as a mixed up day. “The people who are normally at the front weren’t,” he said.

Although only the third day of the regatta, this was also the last day, owing to the COVID-19 situation. By yesterday, the Standard fleets had completed four races, enough to consitute a series, but the Radials managed only three. So today was essential for winners to be declared and the prized Laser Cubes distributed.

There were only two competitors in the 4.7 class, so no cubes were at stake. Two Victorian women fought out the championship, with Susannah Gillam prevailing in every race over Wendy Wilson.

As mentioned, Jon Emmett was the sole competitor in the Radial Apprentice division, so he takes the title but no cube was on offer.

In the Masters, McMahon was on a nett of five points, Tan was on six and Rohan Allen finished third, on 15.

The 34 boat Grand Masters fleet was the biggest in the regatta and one of the most fiercely fought, with the leaderboard changing race by race. Mark Kennedy from Queensland took the title by six points from Ulf Myrin of Sweden. David Early of NSW was third.

The first three in the Great Grand Masters were hard to separate but eventually Bill Symes of the USA won from Jeff Loosemore and Canadian Paul Clifford. Both Clifford and Symes now head home to their respective countries, which are in virtual lock down owing to the virus.

Four-times world champion, Kerry Waraker, dominated the Legends division, scoring just four points after dropping his sole blemish, a second place in the first race today. His good friend Lew Verdon was philosophical in the boat park, admitting he had lost the silver medal to fellow New South Welshman Kevin Phillips. “I wasn’t sailing well in the shifts,” he conceded. “I seemed to get myself on the wrong side of every one and couldn’t get back to the right side.”

Matt Blakely (VIC) and Ian Elliott (CAN) fought out the Standard Apprentice division, with Blakely winning by a single point. There was a big gap back to third place, which Jonas Nissen (GER) took on a countback from Jason Hegert (VIC).

As mentioned, Brett Beyer completely dominated the Masters division, winning by 13 points, the biggest winning margin in any division. It took a tie-breaker to separate the other two podium finishers. David Whait from WA took second and Andrew Dellabarca (NZL) was third.

It was an all international podium in the Great Grand Masters, with Kiwis Michael Keaton and Garry Lock taking gold and silver, while American Don Hahl won bronze. Andrew Whittell was the first Australian, in fourth place overall.

Consensus in the boat park was that organisers had done a great job considering the world-wide crisis and the testing weather conditions. Most agreed with the decision to postpone the Masters Worlds indefinitely, and while there were some who would have welcomed the chance to keep this regatta going, those who are travelling long distances home seemed relieved to finally be starting the journey, fearing more restrictions could be placed in their way.

With virtually all sailing around the world now cancelled or postponed, the Masters will take the chance to rest their weary bodies. But you can be sure when the next chance comes, these old warriors will be among the first back into the water.