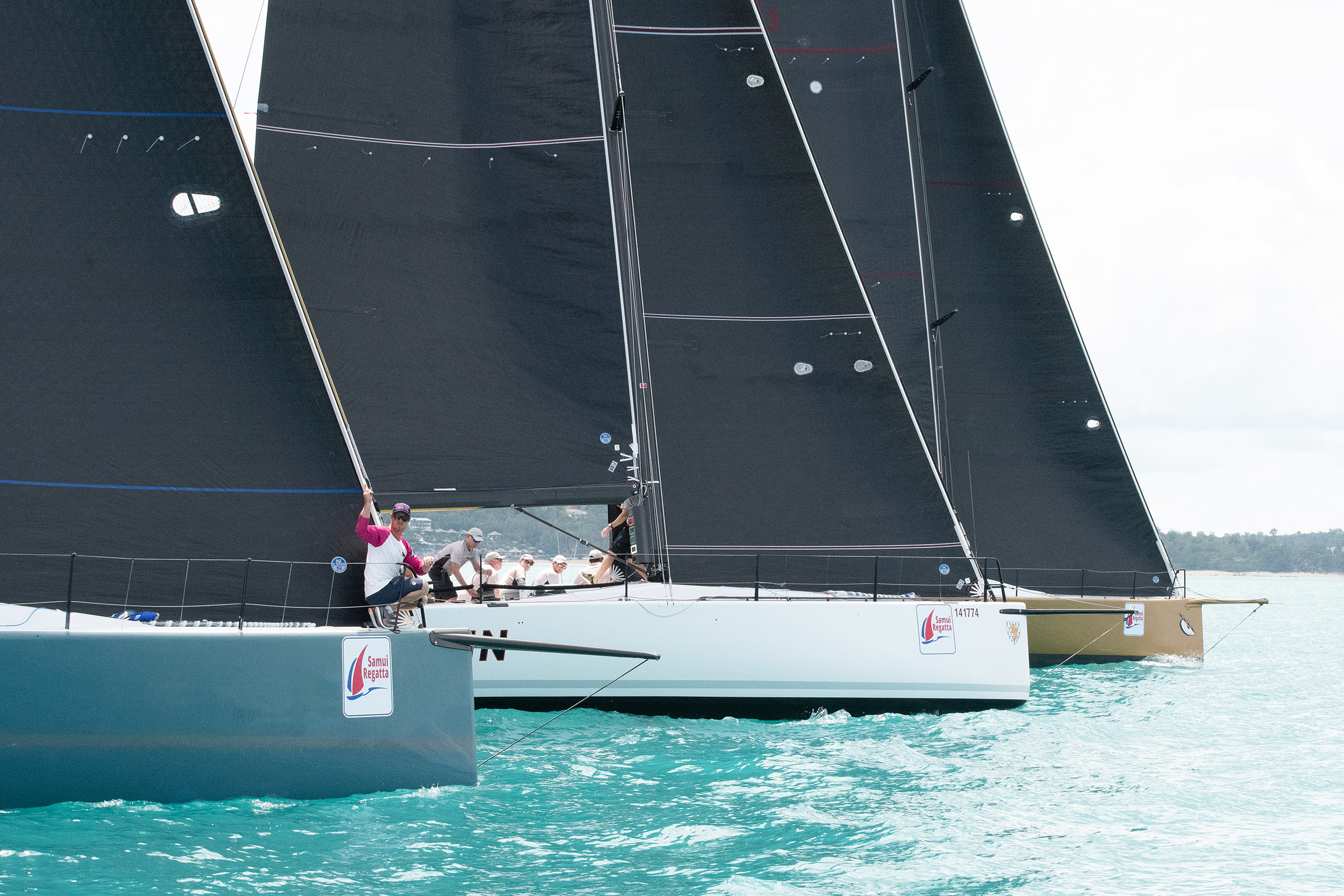 SAMUI, Thailand – The big guns of Asia's racing scene have descended on the Thai tropical island of Samui for the 17th Samui Regatta and the final race in the 2017/18 AsianYachting Grand Prix. Despite an unfortunate cancellation from Frank Pong (Jelik), who has missed only two Samui Regatta's in the event's 17-year history, the line-up in IRC Zero is impressive: Five 52-footers –THA72, Freefire, Team Ulumulu, Ark 323, WindSikher – including four TP52s, the 66-foot canting keel Reichel Pugh Alive and the Ker 46, Zannekin. Seven of the best boats and crews on the circuit with 11 nationalities represented.

They're joined by four in IRC One – Mandrake III (HKG), Loco (SIN), Fujin (AUS), El Coyote (THA) – and three in Performance Cruising – Souay 1, SailQuest Hi Jinks, Moon Shadow – while the multihull class has seen a resurgence with four Corsair Pulse 600's trailered over from Phuket and the KL 28 Edenko from Pattaya joining in the fun.

The Day 1 forecasts were for light wind and as the sailors headed out to the start line following a lively Opening Party on the beach the night before, they were greeted with an AP and a busy on-water team searching for wind. Patches of breeze made way for a steady light breeze – enough to get racing underway – and at 10:20 they were off.

First up were IRC Zero. Following some damage on their way from Hong Kong, and a subsequent repair, Alive were quick into their racing with a third place in Race 1. Two fifths in the other races of the day saw them finish down the standings in fourth overall.

Never skipping a beat were THA72. Having sailed down from Pattaya, and fresh from their Top of the Gulf Regatta win, THA72 are in Samui to defend the title they won in such commanding style last year, and they didn't waste any time today. Three wins made for a perfect start, but the devil is in the details; just eight seconds separated THA72 from Zannekin on corrected time in Race 1 while in Race 3 WindSikher were just four seconds short of a victory.

A 4,2,2 sees WindSikher finish the day in second with Zannekin third overall.

For the four TP52s competing this year a TP52 division is being run in parallel to IRC Zero, and the details tell an interesting story with just 21 seconds separating second to fourth places in Race 1. The story of the day, however, has to be the rapidly improving Chinese crew on Ark 323 who finished with a 4,3,2 scoreline and by way of a second in the final race of the day site second overall on count back.

In IRC One, the 2017/18 AsianYachting Grand Prix champions-in-waiting had a slow start to their campaign with a third in Race 1. They recovered with two second places and finish the day in second overall. There was no stopping Loco, however, who's three bullets give them the best possible lead at the end of Day 1.

The Performance Cruising and Multihull classes completed just two races today and it was Jean Rheault's Souay 1 who claimed the daily double in both races in the Performance Cruising class and has the early series lead. A little slow off the start with a third in Race 1, Tim McMahon's SailQuest Hi Jinks recovered to place second in Race 2 and with a reversed 2,3 scoreline for Mick Grover's Elliott 7, Moon Shadow, both are tied at the end of Day 1.

At 28-foot, Edenko is the largest entry in the Multihulls Class and is up against four one-design Corsair Pulse 600s. The Corsair trimarans made better of the light winds today but they didn't have it all their own way with Edenko finishing the day in second overall and a scoreline of 4,2.

Leading the standings is Andy Pape's Sudu Red with two bullets and with second to fourth all tied on six points, expect some close racing in this class over the coming days.