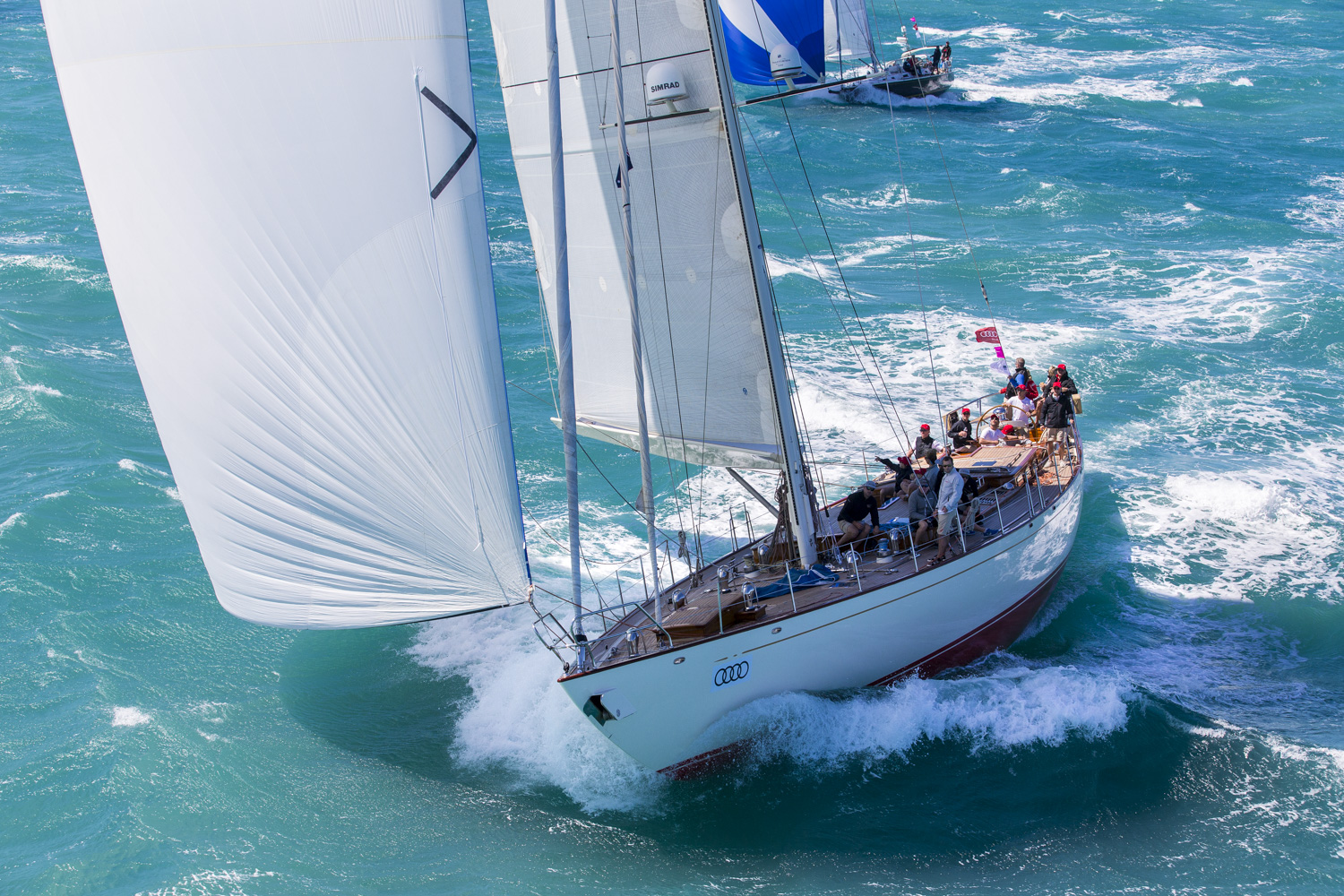 All divisions contesting passage races were finished at Denman Island as the sou’easter ran out of grunt over the course of Monday afternoon, August 21, 2017, dropping from 12-15 down to 5 knots.

Light shifty winds on the Eastern Course for the IRC Racing division caused a long delay in the commencement of their windward/leeward program. Following a two-hour wait for a start gun that race went to Phil Turner’s RP66 Alive on corrected time with Peter Harburg’s Black Jack 100 runner-up on handicap and the line honours victor, beating the Oatley family’s Wild Oats XI by nine minutes across the finish line.

Both supermaxis were over at the start in Chance Bay and individually recalled by race officer Greg Sinclair. Black Jack restarted and went left up the course and Oats went right, “the wrong side to go,” said Glenn Bourke, Oats’ tactician for this series.

The last time there was enough wind to conduct the Club Marine Classic Long Race for the big boats appears to be back in 2011 and Tuesday’s forecast holds nothing promising in terms of running the lengthy 50 miler the day before the Wednesday layday.

Regatta director Denis Thompson has a number of options and based on the latest weather information will make a decision overnight on where to send the 215-boat fleet on Tuesday.

What do you do next when, as a mountain guide you have led expeditions on some of the world’s toughest climbs and as a pilot you have broken several world aviation records?

If you are serial adventurer Matt Brooks, you find a 88 year-old yacht with a stellar racing record, spend a year restoring the Sparkman and Stephens design to its original glory and then set about beating every race time the boat recorded from the 1930s onwards.

Brooks’ yacht Dorade – the first yacht to sport the characteristic ship’s vent after which it’s named – is a classic Sparkman and Stephens design that was so radical and successful in her day that her crew was given a tickertape parade on Broadway after winning the Fastnet Race in 1931.

Brooks has already bettered the goals he set for the restored Dorade, having campaigned in all of the classic bluewater races in the United States including winning the 2013 Transpacific Yacht Race, 77 years after the boat’s original win.

Now it’s Australia’s turn, with the ‘Dorade Down Under Campaign’ in full swing as the yacht’s elegant and sleek lines grace Race Week and, with a crew that would do justice to a top international grand prix sailing program, set to prove that this beautiful boat from the New York Yacht Club is very much a wolf in sheep’s clothing.

Competing for the classic yacht swoon factor on the Cruising Division start line Dorade has some competition in the eye-catching lines of the Hoek designed 78 footer Drumfire from Sydney. With its traditional lines it too is not all it may seem, being only ten years old, built of aluminum, sporting a veneer of highly polished timber and holding an impressive race portfolio.

Owners Will and Jane Vickars first spotted Drumfire while sailing in Sardinia, “We walked past it every day and admired it” said Jane, who took the opportunity to purchase Drumfire and bring it to Sydney when it came on the market.

The lesson it seems for those crews of the modern yachts in the Cruising division is to remember the adage ‘Old age and treachery will always beat youth and exuberance’.